This Leftover Pot Roast Ramen Bowl is a fantastic way to use up leftovers–in this case I used a Malaysian Pork Shoulder in Caramelized Soy Sauce, but most pot roasts would work. This is a blueprint rather than a formal recipe, because what specific ingredients you use and how much will depend on what you are starting with. Affiliate links have been used in this post to link to items I am discussing. 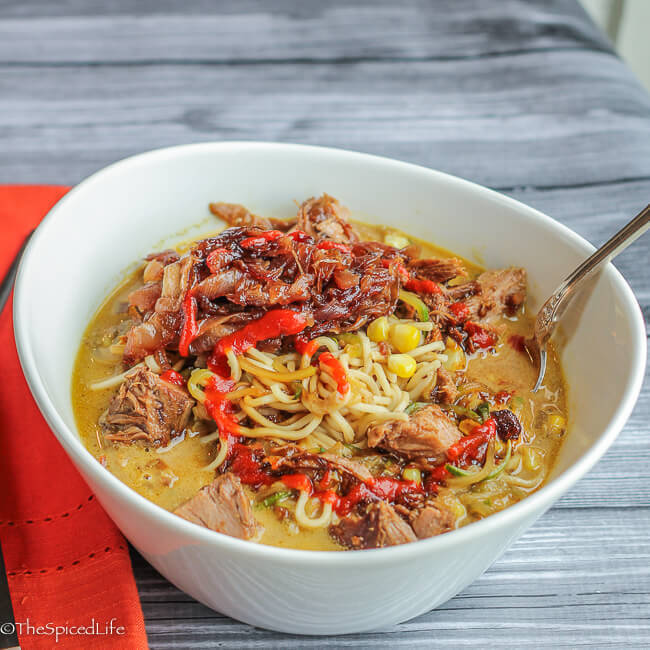 I have never been big on re-purposing leftovers. I should be, I know. It prevents waste and keeps people from getting bored. But the way we cook is such that after cooking one night, I don’t really feel like dealing with the kitchen the next night and would rather just eat the same thing.

In this particular case, I had made a Malaysian Pork Shoulder in Caramelized Soy Sauce, a recipe that I have always wanted to re-photograph for this blog. I messed up though–it is apparently one of the few recipes out there that does not go from Dutch oven to slow cooker without some tinkering, as the result, while decent, was not nearly as intense as when I made it in the oven. I have some ideas for how to fix it–it is a fantastic recipe–but in the meantime it was hard to get super-enthused about my leftovers since I was grouchy at having not gotten the results I had imagined. 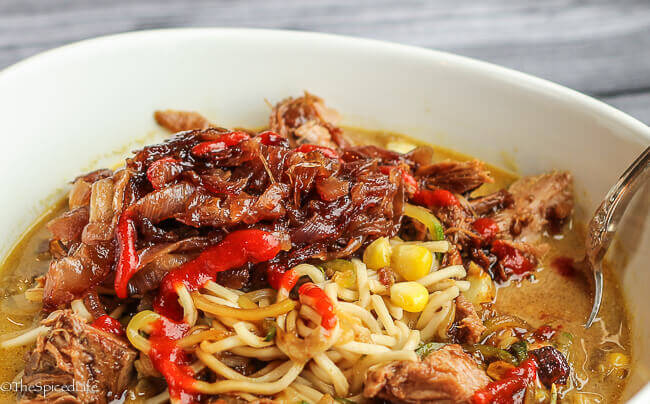 But in the meantime I hated the idea of not eating the leftovers. The pork was succulent, cooked perfectly. And it had been made with a bone-in shoulder, so the liquid was silky with gelatin. And it was delicious, it just needed more. In other words, what might not be quite intense enough for a sauce was more than intense enough for the base of a broth–especially since I added homemade frozen beef broth to it.

This was divine inspiration I tell you.

In this particular case, I decided because the original dish came from an Indian Malaysian cookbook, I did not want to use curry powder–but it would work in this and other cases if it is all you have. Instead I roasted some whole cloves and cardamom seeds in oil (the dish already had cinnamon and star anise), fried onions in that (the dish already had a lot of garlic and ginger, so I skipped those), added a lot of zoodles (zucchini in the shape of noodles) and then added ground turmeric, paprika and my garam masala. To this I added corn (because it is summer), beef broth, coconut milk and fish sauce. I also fished the pork out of the leftovers, set it aside, and added the pork shoulder bone and all of the leftover “au jus” to the mix. 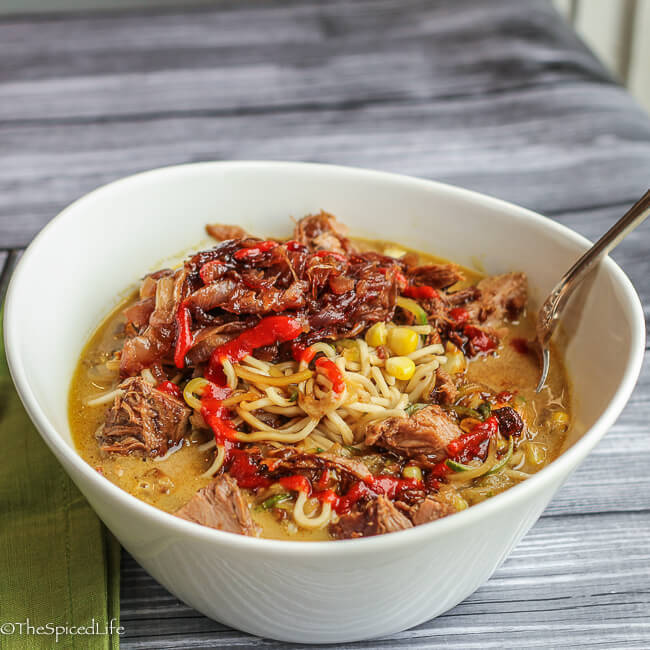 After letting it simmer to concentrate the flavors, all that was left was to assemble the dish. I heated the pork separately (I did not want it to dry out in the simmering soup), placed ramen noodles at the bottom of a bowl, and then used the pasta spoon to fish out the onions and zoodles to mix with the noodles. Then I ladled broth over that, added pork chunks, caramelized onions and a little kecap manis (ABC Indonesian Sweet Soy Sauce)

to each bowl. You could also add eggs. Those who liked it spicy added some Sriracha.

Alex was not home for this meal, but the three of us who were enjoyed it immensely. The texture of the zoodles was fantastic with the ramen noodles (I liked them mixed) and kept me from eating way too many noodles. I think I am going to start turning all of my leftover pot roasts–and you guys know I make a lot!–into ramen bowls.

How would you turn leftovers into a ramen bowl?