The Duomo di Siracusa (the cathedral of Syracuse, Sicily) was my favorite place we visited in Sicily. Its architecture and history were fascinating and awe inspiring. I could not come up with a good segue for any particular dish or dessert for this one, so stay tuned for more food coming later…. 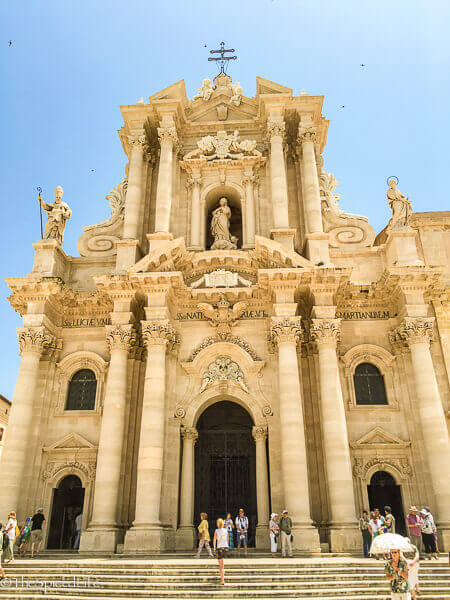 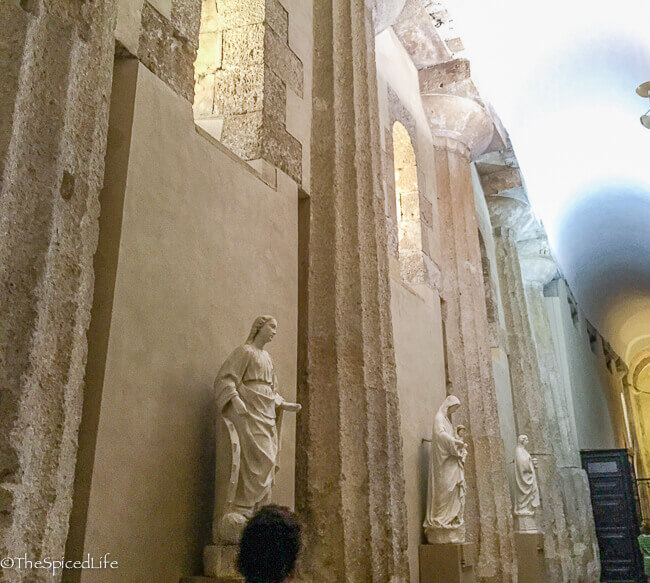 The ancient Greeks built a Doric temple to Athena on this site (and archaeologists believe there were 2 temples there before it, on the highest point of the island, going back to 1100 B.C.), and when the first Christians built a church on the site, they used what was already there. Some things I read indicated that the first Christians in that area may have conflated Athena and the Virgin Mary, as Athena also was a virgin mother (I am sure the issue is more complicated than that, you can read some about it here) and thus using the temple was not so far fetched as it might seem. The switch to a mosque happened with the conquering Saracens; likewise the switch to Catholicism came with the conquering Normans. What made me so happy is that with each change they added layers, rather than removing (with the possible exception of the mosque years–I did not see any notable Saracen influence in the building), although theft and some earthquakes did remove some layers. The exciting point is that you can clearly see the bones of the temple to Athena.

Even better yet? You could touch it. 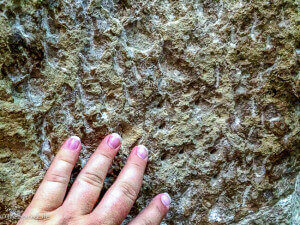 OK I don’t know if I was allowed to. But I just could not resist. It was part of an ancient temple to Athena. I might have encouraged Alex to also. She is my fellow Greek mythology nerd. 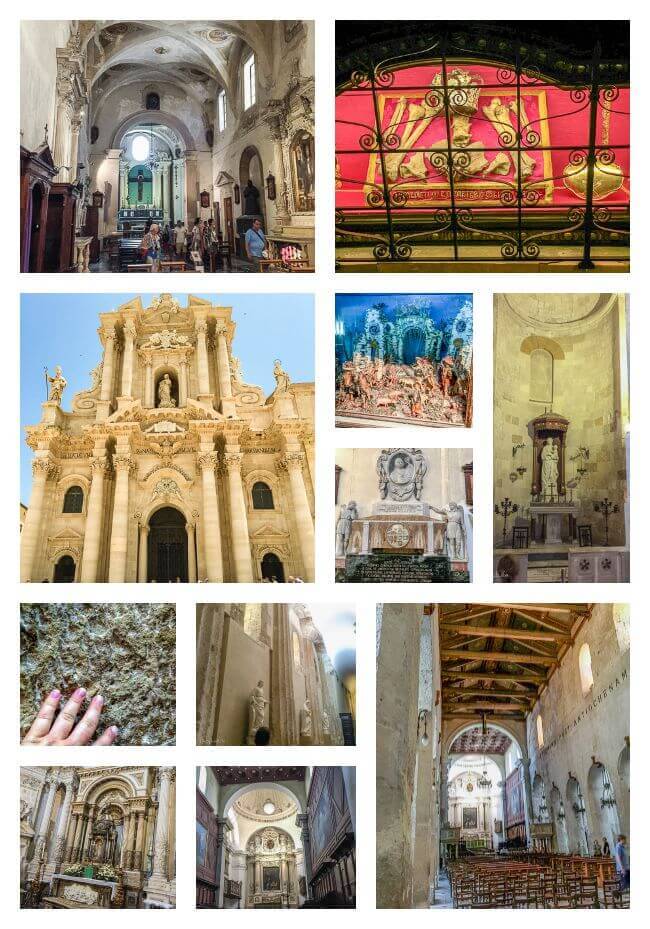 The Duomo was exciting for another reason. It had side chapels that were used as tombs, ossuaries and reliquaries. I am sure there are more exciting and prominent examples of all these throughout Europe, but this is a facet of Catholicism that I am quite unfamiliar with (despite being raised Catholic through elementary school) and thus found fascinating. The most famous relic in the Duomo is the arm bone of Saint Lucia; there is an entire chapel devoted to her life and works. I did not feel comfortable taking pictures in that room, and so did not. 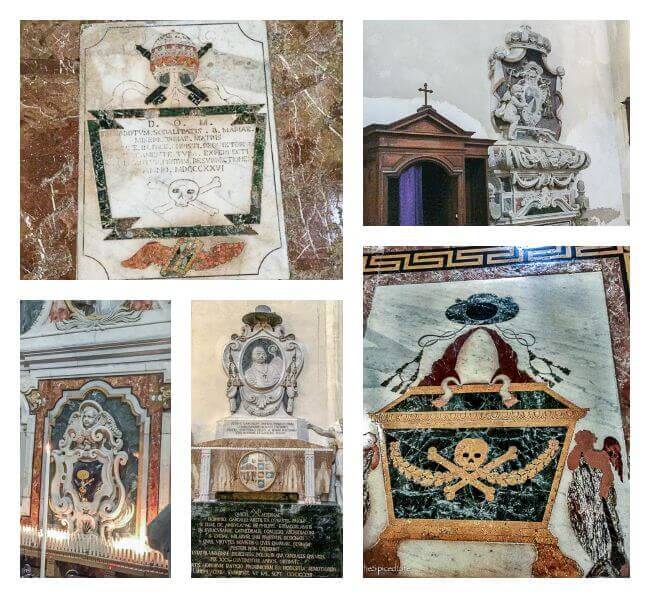 The Chapel of the Holy Cross (pictured above in the collage) also fascinated me. It apparently covers a charnel house, a fact I only learned after returning to the States (honestly it was hard to understand this chapel while we were there–we were fascinated but perplexed by what we were looking at). There were clearly relics in it (see picture below), as well as a style of art that was completely unfamiliar to me. I want to speak respectfully of the art, but I won’t lie the skull with the crossed bones and the hats that reminded me of fedoras were just so foreign to me in a church. My sister said it reminded her of a bone chapel–it is not a bone chapel, at least not as defined as a chapel made of bones, but it does house ossuaries, places where the bones of various families and prominent church men are stored underneath the individual decorated marble slabs (the upper left and lower right pictures are of the decorated slabs in the floor). Also, it may not be a true bone chapel, but it definitely shares in that same spirit of the Catholic church, a spirit that is pretty foreign to a lot of Americans I would wager. 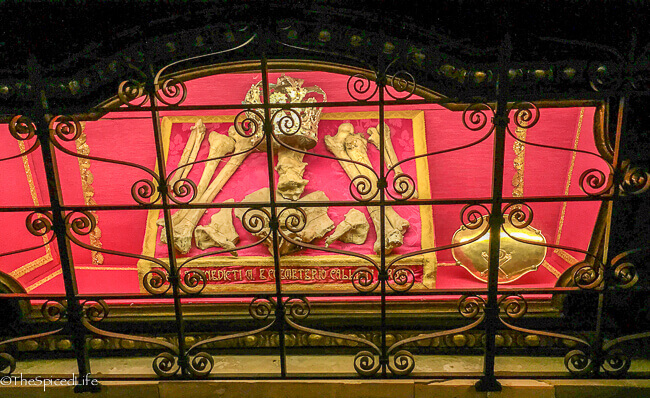 You can imagine what Alex and Sammy made of all of this. They have a nearly Atheist dad and a pretty Agnostic mom who leans a little Christian, so religion is not exactly our specialty to start with. For Sammy I think it was almost creepy. The idea of bones and bodies being in these various places was kind of freaky. For Alex on the other hand I think it was like walking into a myth. I was right there with her in that reaction. 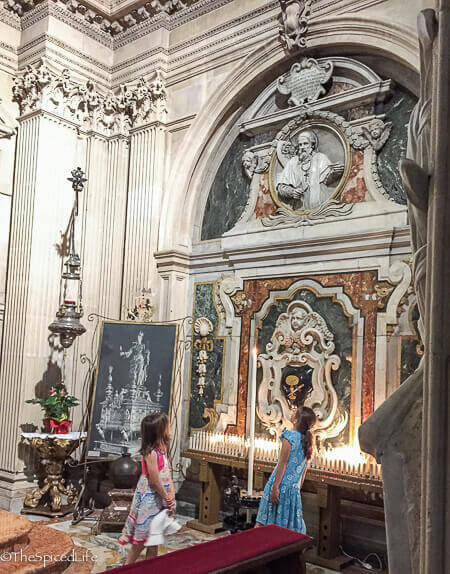 Having said that, it is Sammy who is most like me in thrilling in stumbling upon a beautiful, ancient cathedral with a fascinating history and art/architecture. She has told me more than once since we got back that she misses interesting churches! In a country with many fascinating churches, the Duomo di Siracusa was my favorite. 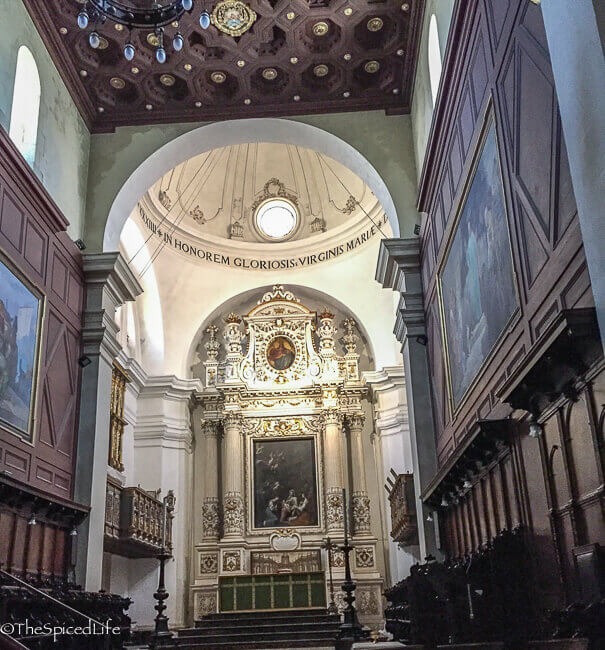