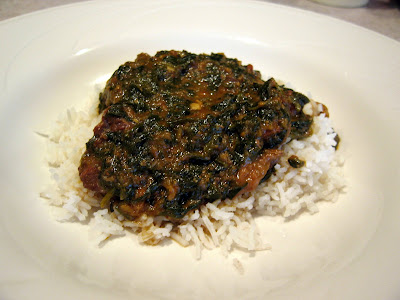 I used to dislike paneer saag, and, by extension, saag dishes in general. I have never been a big fan of cooked greens of any sort, and with apologies to those who love paneer, it kind of tastes like tofu to me. Which is to say that while totally inoffensive, it seems, to me anyway (maybe I’ve never had great paneer?) to take on the flavor of the sauce it is in but does not seem to contribute much. 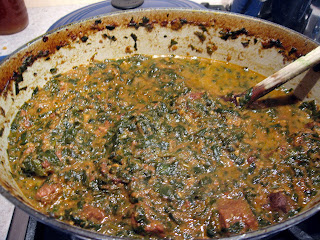 But then one day I was at an Indian buffet, where I always like to take advantage of trying different dishes, and they had saag with chicken instead. Eureka! With some yogurt or raita and tamarind chutney, the dish was stellar, completely different. The chicken added some quality, perhaps that 5th flavor umami everyone is talking about lately, that really balanced the spinach for me. So when I saw Julie Sahni’s recipe for gosht saag, the same dish made with beef, in Classic Indian Cooking

I knew I was going to try it. 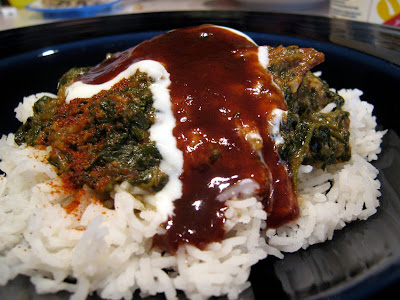 I personally like this dish spicy, but I also like the additional yogurt, not for cooling, but more for its sour tang. And the tamarind is outstanding on it. The whole family enjoyed this, especially Alex who was still asking for it several days later. Good thing we froze some! Next time I will use chuck, as I have called for below. Its texture is just so much more tender and melting than the beef round, although higher in fat I grant you. Similarly I would also use less spinach next time and have therefore called for less after consulting other recipes–so increase by 1 cup if you really love spinach. 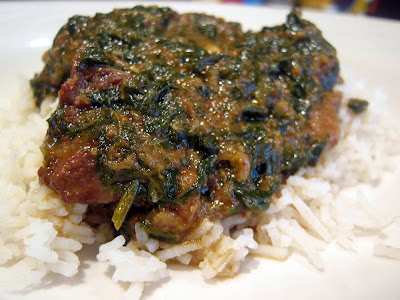