You are here: Home / beans / Persian Rice and Beans with Pickled Red Onions and Fried Eggs, Sunny Side Up 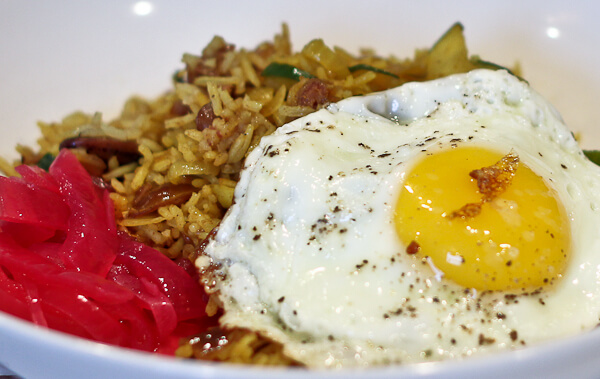 I am becoming more and more obsessed with eggs. Which is weird, because in my previous, not obsessed with eggs life, I did not really even like eggs. Except after a night of too much drinking–then for some reason I craved scrambled eggs. Go figure. But I digress. The point being I never used to care about eggs and now I seem to want them with everything. 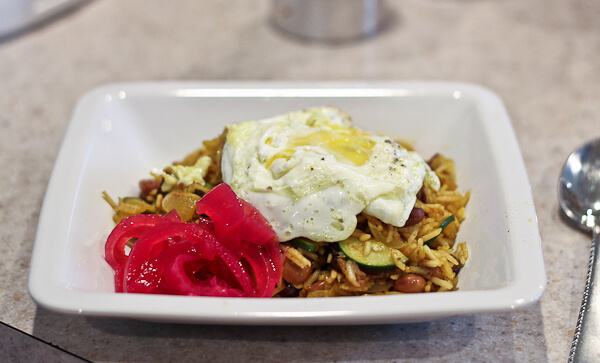 First there was my discovery of all of the amazing ways one can enjoy scrambled eggs in Mexican cuisine, starting with the huevos con chorizo we ate at our favorite Mexican taqueria in Cleveland and leading eventually to scrambled eggs with chilaquiles. Then I had hard boiled eggs with haroset at a traditional Passover dinner. Then came fried eggs, on chilaquiles, on stir fried Balinese noodles, on Thai fried rice… But was frying them enough? Oh no, my friends, then I had to try cooking the egg into the dish, as in this Middle Eastern dish and this Moroccan Kefta Tagine.

Folks, I’ve become obsessed. The single most consumed lunch at my house over the last year is an entire onion, caramelized in extra virgin olive oil, with eggs fried on top of it. Always with a runny yolk. Just today at lunch I tried adding even more veggies (zucchini, garlic, tomatoes and kale) and sprinkling it with chaat masala. I’m sighing just thinking of it. Sammy ate the whole dish and never even noticed the kale (Alex did of course, although she just ate around it). I don’t know how or why, considering I never ate fried eggs as a kid, but suddenly eggs, especially fried eggs, are comfort food to me. And as a bonus? They are fantastic for you and even more fantastic for your growing kids. Forget about that crazy cholesterol paranoia from the 80s. There is more nutrition packed into that egg than any other source of protein you could choose. And as an extra bonus, when you mix that runny yolk into your dish it makes the whole thing pure magic. 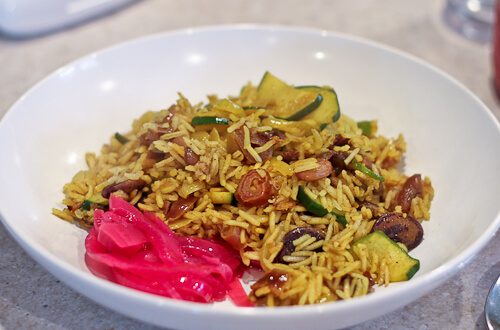 This dish was no exception. It would never have occurred to me to add fried eggs to the dish except for the fact that the actual recipe required it. The dish without the eggs, pictured above, was good. But it was just good. Adding that egg turned this into comfort food magic. The other magic ingredient? The dates. I wrote the recipe below with the amount of dried fruit the traditional recipe calls for, but I won’t tell if you add more dates.  (Full disclosure: both my kids disliked this dish and I never could figure out why. John and I loved it and so did my friend Donna and her family, who took home half the dish after Donna and I made it together one afternoon.) 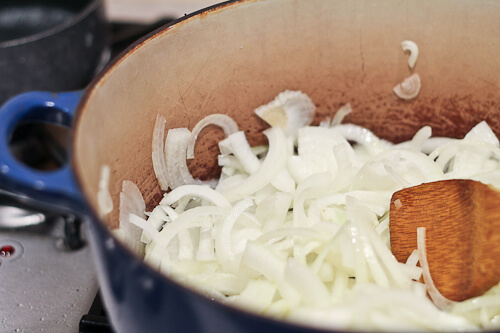 At its heart and soul this is a traditional dish. But I did make 2 major adaptations. The first, and more simple adaptation, is that I cut the fat in half. Just call me a brainwashed American, but I could not make myself use 1/2 cup of oil and 1/2 cup of ghee (and you guys thought I was totally hedonistic, didn’t you?). So I cut them in half and was perfectly happy, but double them if you want. 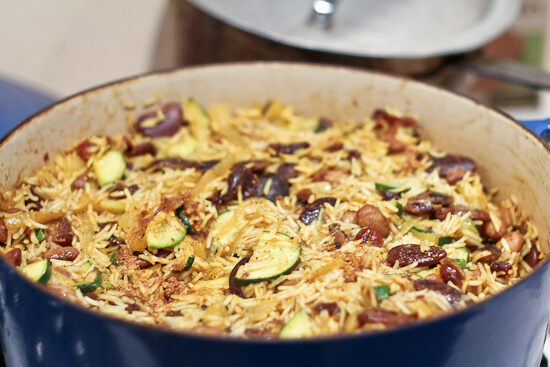 My second adaptation was more significant. It is not often that I give up at mastering a (cooking/baking) technique, but cooking rice with protein and vegetables is one of them. In my experience different batches of legumes and rice need different amount of water, and different vegetables and aromatics release different quantities of liquid, and I am tired of my traditional rice dishes coming out either crunchy or mushy. I don’t know what magic these other cooks have, but without fail it always fails for me. Now my favorite way of cooking basmati rice is to boil it anyway, boil it and then steam it, so I have a developed a method of cooking the rice and beans separately and then mixing it all together before the steaming stage for the rice. Less flavor? Probably yes. Perfectly fluffy and cooked through? Every time. 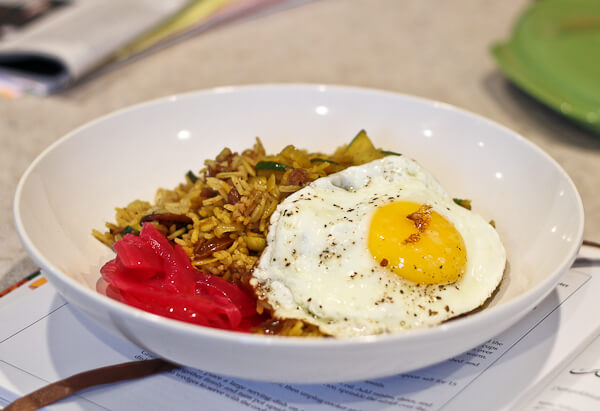 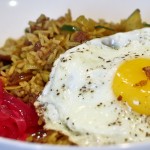