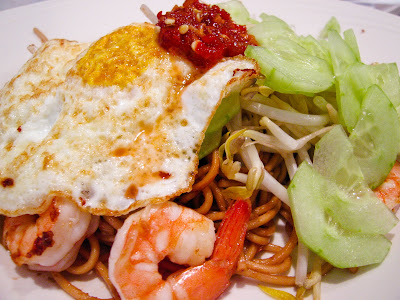 I thought about titling this post How To Rescue A Failed Asian Noodle Dish, but it just smacked of arrogance given how few Asian noodles I have actually made in my life. It is however, a good lesson in how to fix a dish–especially when the initial fail is user error in seasoning.

I got scared off of frying Asian noodles a long time ago because, not owning a wok or large nonstick pan, they always stuck horribly and it was a nightmare of excessive oil and pan scrubbing. So that is my first thought for you: only try this recipe with either a wok or a large nonstick skillet. It makes a huge difference. (And believe it or not, I use the skillet, not the wok. To me a good wok is one that needs to be kept seasoned–and I hate seasoning pans.) 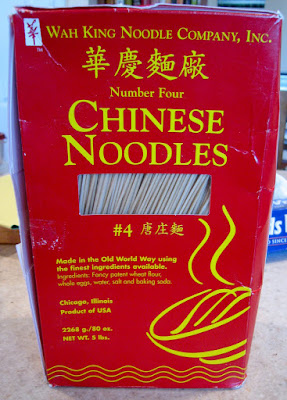 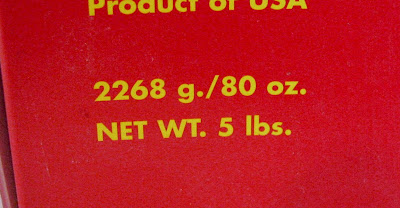 These are the noodles I used. I think Asian noodles, especially the countless unnamed Chinese ones, can be extremely overwhlelming. I bought these on a whim a few years back–I have no idea what I was thinking, as you can see it is a 5 lbs box! So I was happy to have a reason to use them. Just look for Chinese noodles that have wheat and eggs in the ingredient list.

My second thought is that I really wish I had started with Chinese egg noodles 10 years ago rather than rice noodles. The egg noodles are so much easier to work with; this dish was so easy and so fast that I am now determined to investigate more noodle dishes. 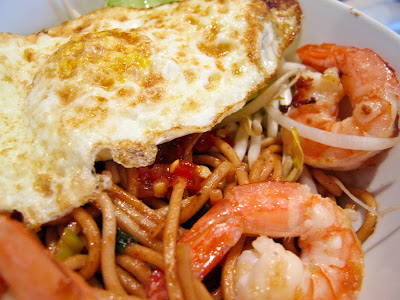 OK, as to the initial fail. I am a shameless eyeballer. It’s one of the things I like about Rachel Ray, the way she refuses to pull out any measuring spoons for spices. 99% of the time this works fine for me, but I am guessing I got the tomato paste and shrimp paste measurements off, and the first night the dish did not go over very well with anyone except Alex (I think Alex would eat fried eggs on styrofoam–that’s how much she loves them). So the second night I fried some garlic and then fried additional noodles in kecap manis only for a few moments, before adding the leftover noodles and stirfrying until you could no longer tell which noodles were fresh and which were leftover. It was a massive improvement–everyone devoured their noodles this night. 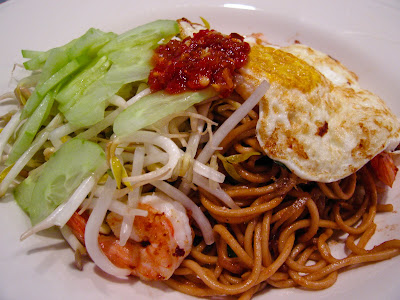 The last change I made–which is not reflected in the pictures–is that while Alex adored this dish with a fried egg, John, Sammy and I preferred it with omelet strips. The fried egg makes a prettier picture and it is truly the more authentic way to serve it, but I suggest you go with your gut on this issue.

As with all stir fries, make sure all of your ingredients are prepped and ready to go before you start. 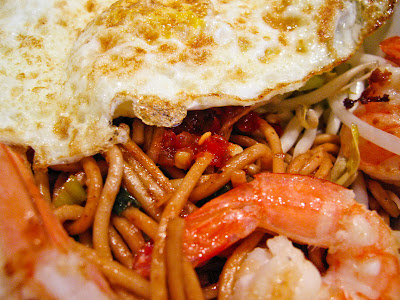 1 1/2 lbs fresh (or 3/4 lb dried, which I used) thick (spaghetti sized) round egg noodles
2 1/2 T vegetable oil
5 garlic cloves, minced
3 medium-large shallots, thinly sliced
4 scallions, chopped
3 small, hot fresh chile peppers, minced, optional (I left out and served with Sambal Oelek)
1 scant T Indonesian or Thai shrimp paste (I used Thai as that is what I keep on hand)
2 t tomato paste–if using double strength, use a little less
1 1/2 T kecap manis (Indonesian sweet soy sauce)
salt and pepper to taste
1 egg per person, either fried or scrambled or turned into omelet strips
shrimp (3-6 per person depending on age)
For garnish:
sliced hothouse cucumber
sliced tomato (we did not have)
fried shallots (I left out–I am frequently too lazy to fry shallots, much as I love them)

Cook the noodles–about 2 minutes for fresh or according to box directions for dried (my box did not have directions, it was 6-8 minutes). Drain in a colander, with cold water running over the noodles to both stop the cooking and also to help the noodles to not stick in a clumpy pile. Set aside. Whisk together the tomato paste and kecap manis and set that aside as well.

Heat your skillet or wok with 1 tablespoon of oil. Add the shrimp and saute until cooked through. Remove the shrimp and set aside. If you are scrambling eggs or making an omelet to slice this is a good time to do it. Set the egg aside as well.

Heat another 1 1/2 tablespoons of the oil in a wok or large nonstick skillet. Add the garlic, shallots and scallions, and chile pepper if using, and fry until the garlic is golden and the shallots are translucent, 5-10 minutes. Add the shrimp paste and stir fry until the ingredients are well combined. Add the noodles and toss and fry until everything is heated through, about 2 minutes.

Add the kecap manis and tomato paste and toss with the noodles until it evenly coats them. Add the shrimp and scrambled egg or omelet (if using) and toss with the noodles. Taste for salt and pepper–and possibly additional kecap manis. If you are frying an egg, either heat an additional pan or remove the noodles to a serving bowl, and quickly fry the eggs one by one. Leaving the yolk runny is traditional but does not cook the egg through so I will leave that to your discretion. Serve with cucumbers, egg, and sliced tomato (disregard the bean sprouts in the photos–we all decided that they did not work).