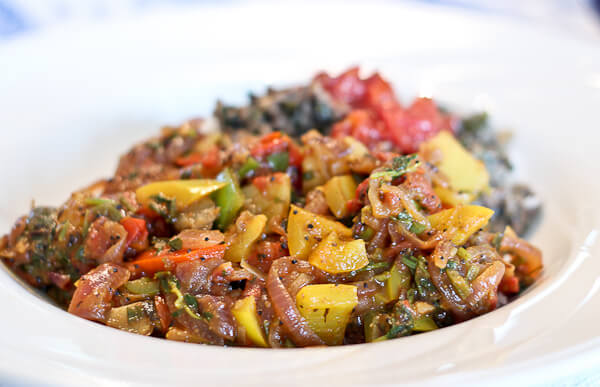 As most of you know, I have a definite preference for one pot meals. I would not say I am incapable of multi-tasking, but when it comes to making dinner I like to avoid it when possible. Because we love homey, rustic cooking like stews, curries and casseroles, I am often able to convert my meals into one pot dishes by adding some protein here, more vegetables there (zucchini is a favorite because it is so flexible).

Indian food is the one cuisine that I am most likely to throw this rule out the window and multi-task for.  There are just so many yummy curries out there that, in order to be appreciated as they were intended, need to not be one pot meals. For example, a curry that focuses on vegetables or a dal that is meant to just be the legume portion of the meal. Further inspiring me is the fact that every now and then I like to force myself to follow recipes, just for the excitement of discovering new flavors. If I am not careful, all of my Indian cooking starts to taste the same, as I reach for my favorite, tried and true spice combinations. 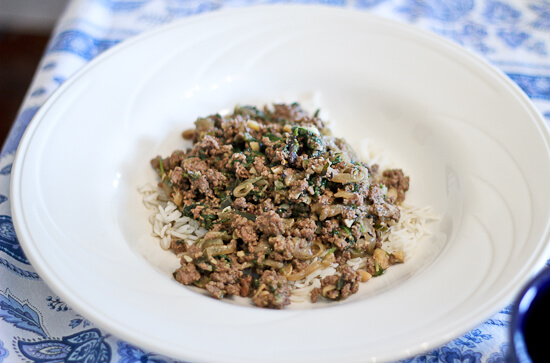 So, one Friday recently was one of those days. I had just purchased what has turned out to be an absolute gem, 1,000 Indian Recipes by Neelam Batra. So I decided I was making 3 curries that night for dinner, a dal, a fruit curry, and a dry curry with potatoes. More on those later, but the next day we had varying quantities of leftovers, all of which tasted fantastic because Indian flavors just get better overnight. So I made another dish from the book, a kheema, to make sure we had enough to serve everyone (my mother in law had joined us in the meantime). The next night, same situation, so I made a 5th curry from the book, along with some shrimp sauteed in Indian flavors (the only dish I “invented,” which was probably unnecessary but my mother in law loves shrimp so I made it anyway). In this fashion I pretty much kept an Indian feast going night after night, with just enough new each day that no one got bored. 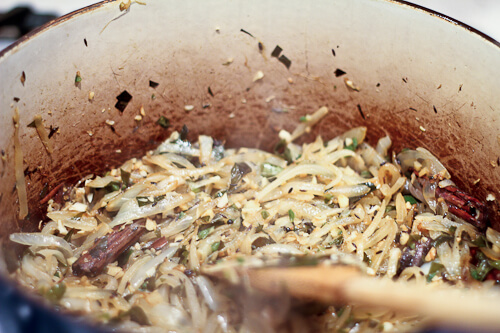 I had originally intended each of these dishes to be a separate post, but then I realized that because I was barely adapting the dishes, I would be basically just typing up 5 dishes all from the same book. So I decided instead to share my favorite of the dishes, and review the book itself. I really like Neelam Batra; she has written another favorite of mine: Chilis to Chutneys: American Home Cooking with the Flavors of India. I have her vegetarian book as well, so when I saw 1,000 Indian Recipes I snatched it up. 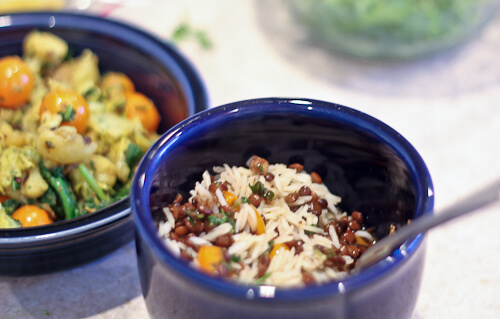 The book is geared toward an American audience, and does offer helpful hints for anyone trying to cook here, but as far as this reader can tell it is also authentic, calling for spices and aromatics foreign to most American cooks, such as curry leaves, kaala namak (Indian black salt), amchur powder (green mango powder), etc. There is a helpful glossary at the beginning for those unfamiliar with these spices. The book is divided into spice mixes, chutneys and pickles, starters and snacks, soups, salads, yogurt raitas and pachadis, vegetable side dishes, paneer dishes, dal, vegetarian curries, non-vegetarian curries, rice, bread and crepes, desserts, and, last, drinks. As you can tell there is something here for everyone! Of the 5 dishes I made, John and I liked all the dishes, loving especially the potato dish with chaat masala, the kheema, and the bell pepper curry. The kids had distinct preferences for flavors they were more familiar with, which is fine by me as long as they keep cheerfully trying the dishes.

I own a significant number of Indian cookbooks at this point and I would not hesitate at all in putting this one at the top of the list to recommend. 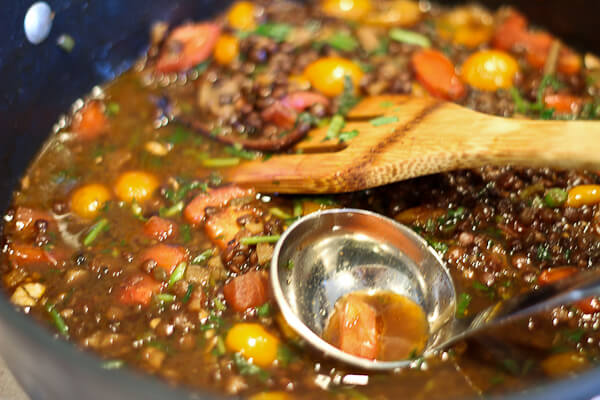 The most unfamiliarly flavored dish turned out to be the dal. Bluuni Saabut Masoor Dal, or Roasted Green Lentils with Tomatoes, calls for green lentils (French lentils du puy work fine) roasted in mustard oil with garam masala, fenugreek and asafoetida. If I had to guess, I would say the fenugreek roasted in mustard oil is what turned my kids away from this dish. John and I liked it, but I preferred it “tempered” by rice. The colors in it were fantastic, despite the base being a muddy brown (see picture directly above). 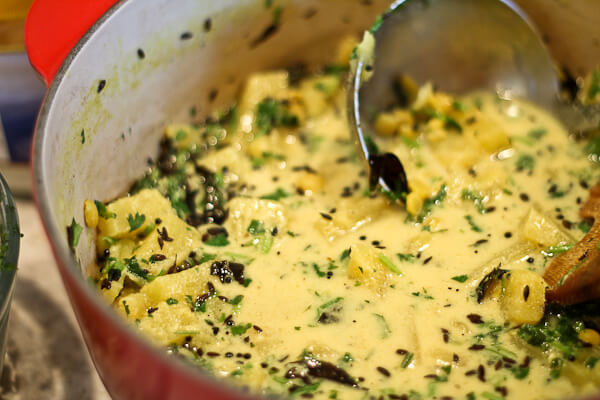 The next dish made that first night was the incredibly unique (to me) Anaanas-Toor Dal Kootu, or Pineapple Curry with Split Peas. This is one that I had to adapt, as it called for mangoes and my small town grocery had none that day. Batra described a kootu as a curry usually made with certain kinds of dal and vegetable or fruits. I figured pineapple ought to substitute ok. Sammy liked this dish while Alex did not; John and I loved it but both agreed that it was quite sweet and rich (it also has coconut milk) and as such, made a better small, complementary side dish. Because of that it lasted all weekend! 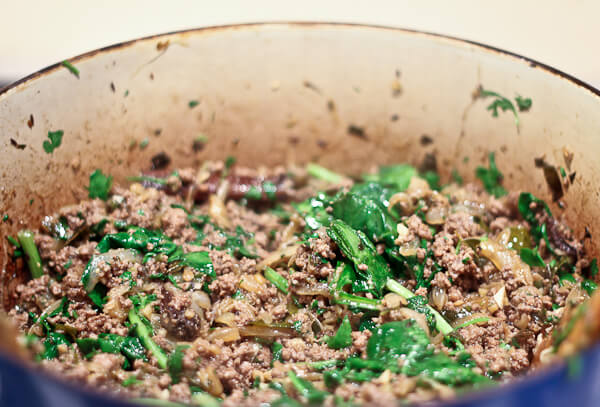 The 3rd dish I made that day was the dry potato curry, but I will save it for last as I am going to share that recipe. The dish I made on Saturday was this Palak-Nariyal Doodh ka Keema (Ground Meat with Spinach and Coconut Milk), which everyone loved. As it turns out, I am not sure the keema exists that my family would not devour. 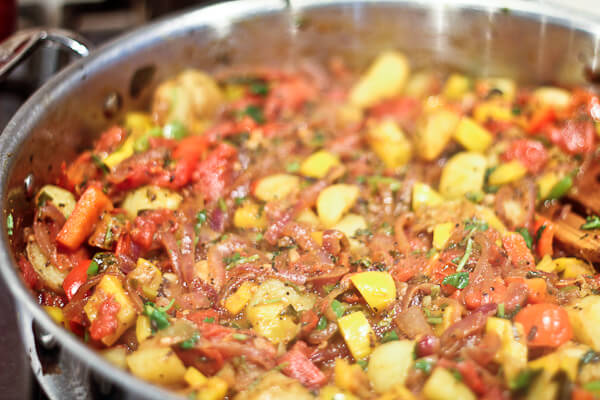 The last day, Sunday, I made Shimla Mirch, or Mixed (Bell) Peppers. I loved how this dish turned out, so colorful. It easily took the best picture, which is why it is featured at the top of this post. Everyone else loved it as well. It also made me quite happy to find a good Indian bell pepper curry, as bell peppers are something I usually have around and yet have previously not had a great sense of a good way to use them (in Indian food). 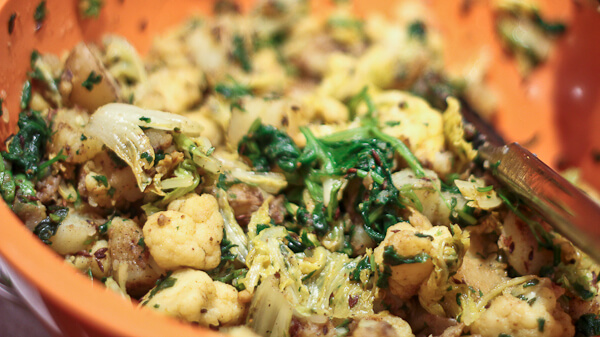 This last dish (made on the first day) was the unexpected star of the meal. Stir fried cabbage and spinach do not really sound like anything that make my family’s day under normal circumstances, but adding potatoes and making my own chaat masala turned this dish into something I have craved repeatedly since. Chaat masala is a somewhat sweet but mostly savory and sour finishing spice mix used in certain dishes, often street food or snacking type dishes, in India. It is blended and toasted before using, allowing it to be used at the end of cooking a dish. This is extra important because the blend contains asaphoetida (or hing) powder, as well as kaala namak (Indian black rock salt), both of which have quite unpleasant smells raw, but when heated impart a wonderful savory quality to the spice blend. It is one spice blend that Indians (in America anyway) will buy pre-mixed commercial blends, maybe because it calls for so many different spices, and so many of them are harder to find in the States. I went out on a limb, having just discovered delicious tart cherry powder from Colonel De, and added a little of it as well since it fit the generally sour theme of the blend, and because I could not find dried tamarind.

I am sprinkling this stuff on everything. It is that good. 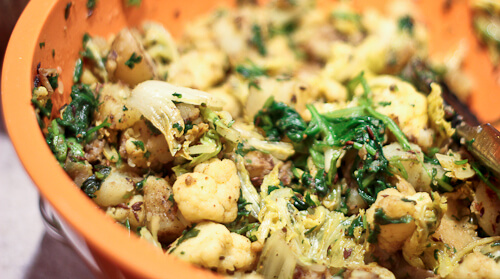 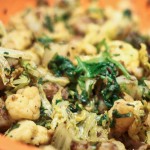