It occurs to me that I have been very lax. Happy New Year, everyone! 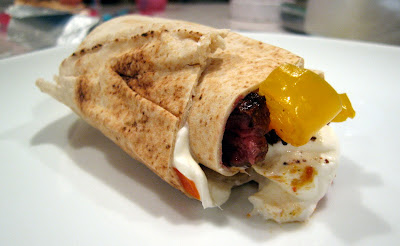 This was a fabulous throw it together weeknight meal. It is inspired by a dish in Spice: Flavors of the Mediterranean, by Ana Sortum, and that dish was in turn inspired by a traditional Turkish kabob called Iskander. Originally I had pulled out skirt steak for tacos, when I remembered this recipe in Sortum’s book.

There are 3 important parts to the recipe, only 2 of which are even recipes: a good, preferably thick Greek, whole milk yogurt, the spice rub on the steak, and the Brown Butter Tomato Sauce. The roasted veggies are healthy filler and the pita bread obviously holds it together, but I think you could serve the same meat with the yogurt and sauce on a bed of greens, for example. For what it’s worth, I roasted a yellow bell pepper, red onion and zucchini in a 450 F oven tossed in olive oil. 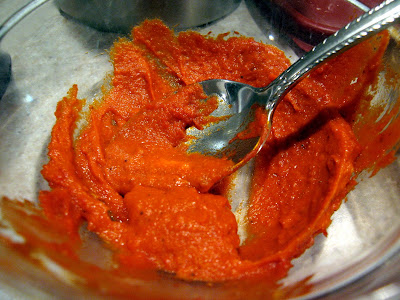 This was also a great recipe to use one of my Muir Glen reserve canned tomatoes on. I used the last of the 2008 cans they sent me, the Muir Glen Organic 2008 Reserve Halley 31 55 Tomatoes Petite Diced. The tomato sauce was totally fantastic–and because it has just a few ingredients, a good canned tomato is essential. 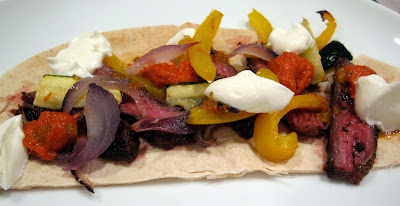 Sprinkle liberally all over steak (cut steak into several large pieces, otherwise skirt steak can be too unwieldy to work with) and rub in. Let sit in fridge 30 minutes or so. Heat a large, preferably cast iron griddle over medium heat. Right before adding steak, add a drizzle of olive oil and about 2 tablespoons of browned butter (see below–you will have extra from that recipe). Cook over medium heat, 5 minutes on the first side and a minute on the second side for rare. Reduce the heat if the spices start to char. Let sit 5 minutes before slicing against the grain. Place in pita so that pita can absorb the meat juices (if using pita).

In a large pot, heat the olive oil and add the garlic. When it is fragrant and golden, add the tomatoes. Cook until they are broken down and saucy over medium low heat, about 20 minutes. Add salt and pepper.

In a separate small skillet, heat the butter over low heat. Let it melt and cook for about 12minutes, watching it closes. You do not want it to burn, but rather turn nut brown and smell like hazelnuts.

Place the tomatoes and half of the browned butter (the other half will be used for the steak) in a blender. Puree until smooth. Serve the skirt steak with this sauce and whole milk yogurt. Roasted veggies and pita bread make a nice roll.