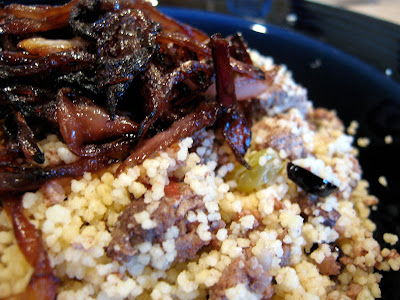 Now that fall is here I have been craving long cooking, hearty dishes like braises and stews. However, my life has not really cooperated, and so I have not made any yet. But in a fit of frustration, I did decide to take Moroccan Braised Lamb With Couscous and Caramelized Onions and make a quickie version using ground meat. 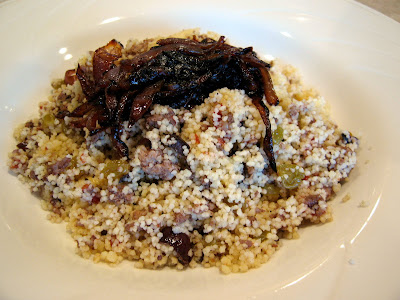 It actually worked quite well. It was fast, tasty and filling. Served with a salad it was pretty nutritious too!

Now that fall is here I am also back to using canned tomatoes (or frozen but I did not want frozen in this dish). A while back, Muir Glen contacted me, saying that they had noticed that I recommend Muir Glen canned tomatoes (I do–from personal preference, I have no affiliation to the company) and asking if I would like to try their special reserve tomatoes? Heck yeah! What is better than being sent, free, the special version of something you already use anyway?

So after a very short while, some fire roasted tomatoes (which I love) and “Muir Glen Organic 2008 Reserve Halley Thirty-One Fifty-Five Tomatoes, Petite Diced, Hand Harvested” arrived in a cute little crate in my mail. I did not use them right away–seeing as it was real tomato season around here–but now that local tomatoes are far and few between I decided to pop open a can for this dish. Now in retrospect I don’t know if that was the smartest decision since this dish did not really hi-light the tomato flavor, but I really wanted to try them and luckily I still have 2 cans, with a promise of 2009 Reserve to come. 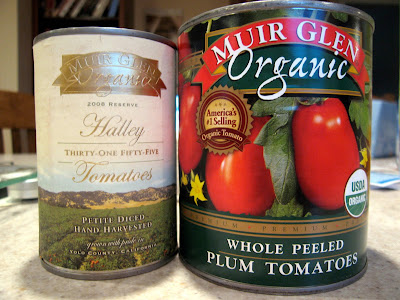 They were wonderful. They tasted and smelled fresh in a way that most canned tomatoes do not, less simmered down or something. I am not sure how to explain it. I was originally planning to use them on something like chili, but now I am wondering if I should save them for Indian curries, since really wonderful, fresh tomatoes have a big impact in that cuisine’s curries, as I have noted before.

So how can you get these wonderful canned tomatoes? Well, I guess by joining their Tomato Connoisseurs’ Club, and since I have no idea how expensive that is I am not necessarily recommending it, especially if you preserve, either by canning or freezing, your own tomatoes. But I have always recommended Muir Glen canned tomatoes of those available commercially, and I certainly continue to do so. 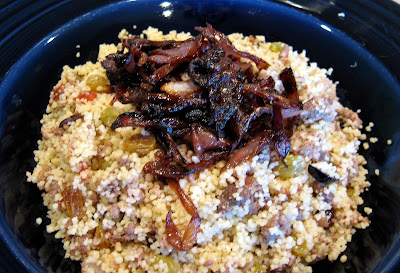 Heat a large non stick skillet over medium heat. Add the butter and the thinly sliced onions. Sprinkle with salt. Once they are sizzling, lower the heat. Basically you are going to caramelize these onions while you cook the rest of the meal, so keep an eye on them, tossing occasionally By then end you will have turned the heat quite low, but in the beginning I like to let them get some color.

Heat a second large stainless steel skillet over another burner, medium high. Add and heat the oil. When it is shimmering, add the finely chopped onions. Cook, stirring, until they are light golden brown, maybe 5-7 minutes. Add a pinch of salt and the ground meat with the spices. Stir the spices into the meat and cook, stirring occasionally. The mixture should be fragrant with the spices–if it is not, add a little more (I added as I went, so I am giving my best guess as to how much of each spice I used). Add the garlic and cook for 1 minute, then add the tomatoes. Cook for 2-3 minutes, and then add the golden raisins and olives. Cook, on medium-low, for another 10 minutes or so to blend the flavors. Be sure (as I did not and learned a lesson) to put a lid on the skillet if the liquid evaporates or else you will dry the mixture out.

Toss with couscous and top with caramelized onions. We tossed with less couscous for the adults the second night–the kids liked a lot of couscous, which is the ratio you see in the pictures.