You are here: Home / beef / Saffron Rice with Meatballs; Quick Spiced Potatoes and Cauliflower with Baby Shrimp: A Review of The Bengali Five Spice Chronicles 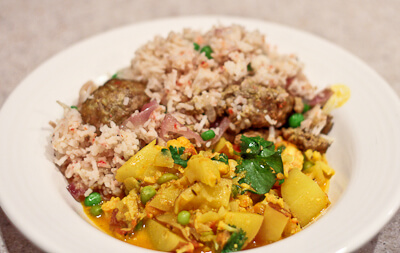 One of the big perks of blogging is being given cookbooks to review (I know you are shocked to hear me say that!). I try to only accept books that I would be interested in at least some of the dishes. You can imagine that I often get offered baking books that I am super excited by, but it is a lot more unusual to be offered cookbooks focusing on the international cuisines that I love. So imagine my excitement when Rinku of Cooking in Westchester announced that she was looking for bloggers to review her new book focusing on Bengali cuisine: The Bengali Five Spice Chronicles 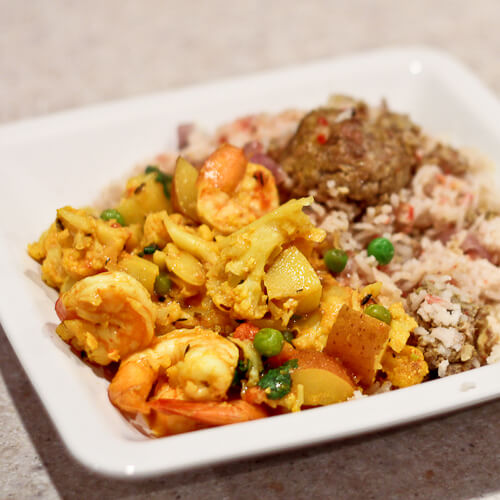 I am afraid my pictures are not going to do Rinku’s dishes justice, because as soon as I got the book I knew I was going to cook from it for a friend who was coming from out of town. Between the shorter days and having a guest, pictures were hurried and not in great light. Sometimes I think that lousy photos are one of the greatest compliments I can pay to a dish, as they usually signify an impatience to get eating! 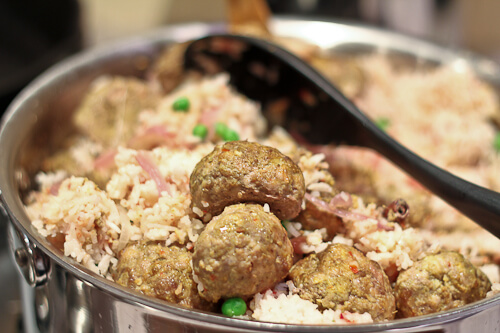 About the cookbook itself… The title refers to panch phoron, the Bengali 5 spice mixture comprised of (all whole spices) cumin, fennel, methi (fenugreek), dark mustard seeds, and nigella seeds. It has gorgeous photographs in the center, although not as many as one would like. However, I know that pictures cost money and not all publishers are willing to provide them. There is a wealth of recipes, something for everyone, including meat-eaters. The recipes all have introductions–always my favorite part–written in Rinku’s comfortable, conversational voice. Going through the book, I feel like I got to know her, which is always a sign of a successful cookbook to me. I have tried 3 recipes so far: 2 were a huge success. The third was delicious to me, but it was more different from Western cooking, less familiar, and therefore a harder sell with the kids. It was also served on a different night from the dishes I served to my friend, so I will save it for another post. 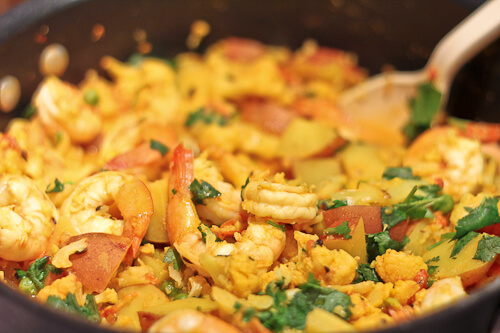 I chose 2 dishes to make for our dinner. The first, pictured above, was quick, healthy and delicious: Spiced Potatoes and Cauliflower with Shrimp. The second was the somewhat more involved, somewhat less healthy, but absolutely scrumptious (and guest-worthy) Saffron Rice with Meatballs. Knowing that I would be reviewing the dishes for this post about the book, I tried to keep my changes to a minimum. One change that I made consistently was to reduce or leave out green chile peppers, as I was concerned they would make the dishes too spicy for my children. 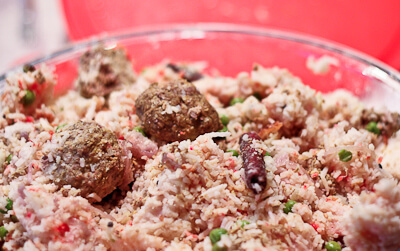 I will be featuring more recipes from The Bengali Five Spice Chronicles, and I hope you stay tuned because I will be hosting a giveaway for the book as well! The recipes below are copies from Rinku’s book, with my changes in parantheses.

Make meatballs: Preheat the oven to 350 degrees F. Process the onion, ginger, garlic, and green chilies in a food processor until finely chopped. Mix this with the ground chicken and add the turmeric, salt, garam masala and cumin-coriander powder, and mix well [Rinku likes to use her hands]. Grease a baking sheet with oil or cooking spray (I used silicone). Shape the chicken mixture into walnut-size meatballs and place on the baking sheet. Bake for 7 to 8 minutes, turning over once. (It is important to cook the meatballs thoroughly, but make sure they do not dry out.)

Make the rice: Heat the oil and ghee in a saucepan, and add the cardamom pods, cloves, cinnamon stick, and onion. Stir in the sugar and cook on low for 10 to 15 minutes. Stir in the rice, salt, yogurt, peas, and 2 cups water and cook on low heat for 25 minutes. The rice should be fluffy and cooked through at this point. Carefully mix in the saffron and check seasoning.

Gently mix the meatballs into the rice, cover, and let simmer for at least 5 to 7 minutes on low heat. Turn off heat and let rice rest for 5 minutes before serving.

Heat the oil in a wok or skillet and add the panch phoron and wait for the spices to begin crackling. Add the ginger paste and slit green chilies. Stir in the cauliflower and potato. Mix in the turmeric, tomatoes, and salt. Cover and cook the mixture on low heat for about 10 minutes.

Remove the cover, the vegetables should be nice and soft at this point. Stir in the shrimp and sour cream and bring the mixture to a simmer. Cook for about 5 minutes. (If using peas, add them now.) Stir in the cilantro and serve.

Fine print: I received this book for free for review, but was not compensated in any other way for the review. All opinions are my own.