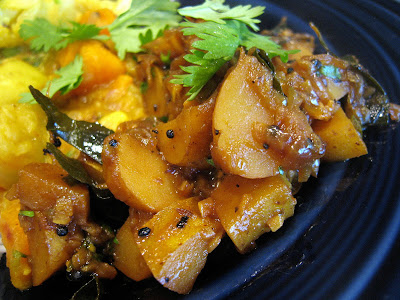 I may have made a grown man cry tonight.

I’m not sure–since he’s in Iowa and I have no proof–but John called while we were eating dinner from his conference and when he heard how our dinner went he was not so happy with us for making it without him.

Which is ironic because this dinner almost did not happen. I called Josie early this week to ask her what she was in the mood to eat while visiting. Mood is the operative word here, because my sister, while a fantastic cook, is possibly the moodiest eater I have ever met. She does not like to smell what she eats while it is cooking, and while totally willing to try anything in a restaurant, is more apprehensive about cooking anything for fear she will waste the effort. 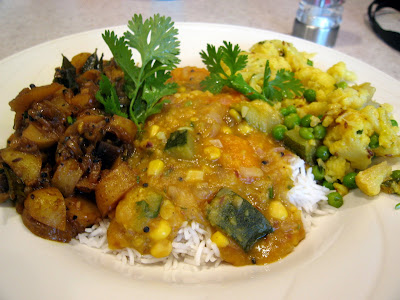 Anyhoo, when I called, she asked me if I could teach her to cook South Indian vegetarian food, which we have both been loving at the Banana Leaf Cafe in Columbus (her more frequently than me since she lives there). I was really complimented, since I think of Josie as being able to successfully cook anything she feels like trying.

Fast forward to this morning when she told me she wasn’t sure if we should make it since she was worried the smell of the lentils would both her. Yes she is crazy. 🙂 I more or less held firm and told her if my toddlers have to eat what is served so does she. Yes I really said that. (I did offer to cook something else if she could tell me what, but she didn’t really have any suggestions other than sandwiches and anyone who reads this blog knows how I feel about sandwiches). What can I say, we are sisters and we squabble…

So it is a good thing I got it right! 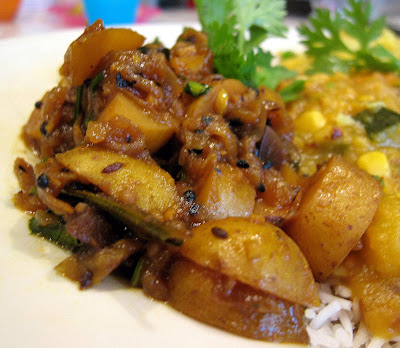 The dishes I chose were Gobhi Hari Matar Sabji (the Sauteed Cauliflower & Green Peas I served my inlaws recently, made at Josie’s request), Sabzi Dhan Shak (Parsi Spicy Squash & Legume Stew, see upcoming post), and Aloo Kaanda Bhajee (Potatoes In Sweet Onion Sauce). This last dish, the potato dish, inspired the whole meal. Josie has been obsessing on the potatoes served by the Banana Leaf Cafe since she started going there. After searching through Raghavan Iyer’s 660 Curries for South Indian potato dishes that sounded both most similar to Josie’s favorite dish and most adaptable to what we remembered, I chose the potatoes made with onions, although I did change it a bit. For example, we both thought maybe there were nigella seeds in the dish at the restaurant. While my take was not a perfect replica of the restaurant’s potato dish, it was very good and quite similar–the whole meal was such a success that Josie told me I should never have served her rice with the stew because “it had wasted valuable stomach space.”

Next time I would ditch the cauliflower dish, just because there were enough veggies in the stew and 3 dishes was a lot for a weeknight meal. But as soon as I have a chance, I obviously need to make John the potatoes and the stew. Else he might never speak to me again. 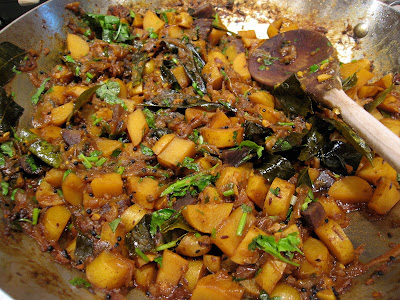 Heat the oil and ghee in a medium-large sauce pan or chef’s pan. When it is hot, add the mustard seeds and cover the pan while they pop. After they finish, about 30 seconds, add the cumin seeds, which will quickly brown and become fragrant. Add the kalonji, and then add the onion, curry leaves and chile peppers before the cumin seeds burn. Sprinkle some salt on them. Toss them and cook over high heat. Cover the pan, stirring occasionally, for 15 minutes, on medium low heat. Then remove the cover, sprinkle a little more salt on them, and turn the heat to high and cook for another 15 minutes or so, until the onions have turned reddish brown.

Add the potatoes and turmeric along with the water and maybe 1/2 teaspoon of salt. Cover the pan, lowering the heat to medium low and stirring occasionally, until the potatoes are fork tender. then remove the cover and turn the heat to medium, enough to simmer the liquid briskly and thicken the sauce. When it is how you would like it (we wanted ours to be somewhat dry, maybe 10 minutes), add the cilantro and serve.