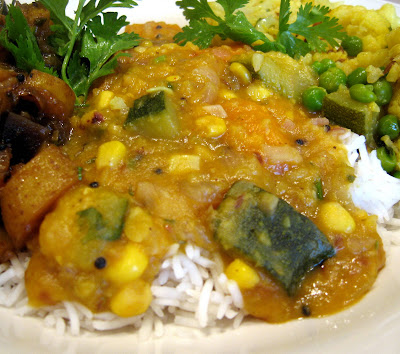 Before we get to the food, I just wanted to say thanks to Josie for all of the help while she was here. John has been gone, and that can get rough with 2 toddlers. She extended her stay until yesterday, when my parents visited, and she helped with dishes, dogs, kids, you name it. Aside from the fact that I just wish we lived closer to each other and she is my best friend, she was also just an awesome stand in for my husband. As weird as that sounds. Anyway….

There is no bigger compliment for outstanding flavor that I could give to a dish other than to say I forgot to put the tomatoes in and it was still spectacular. Seriously. 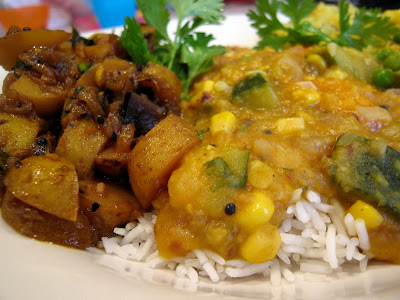 When Josie said she wanted to cook a dal it soon became apparent that while she was interested in trying some of the Indian legumes she was less familiar with (lentils, split peas), she wanted something with lots of vegetables as well, which I don’t think is a dal, but I guess I am not so sure. She also wanted something less soupy and more thick. I eventually found a contender in Julie Sahni’s Classic Indian Vegetarian And Grain Cooking. The dish stood out to me for 2 reasons: it had loads of chunky veggies cooked with the legumes, and I suspected that I could sub in whatever veggies I wanted–which is a good thing because there are some vegetables that no matter how much I love the sauce they are served in, I cannot stand the idea of them so cooked (green beans, for example). 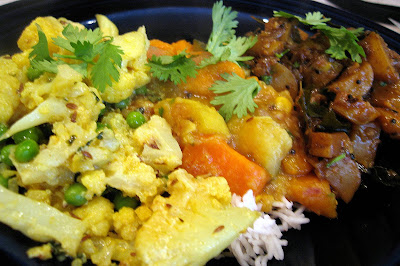 If you missed the preceding post, here are the links for the recipes for the cauliflower dish and potatoes.

This Parsi Spicy Squash & Legume Stew is apparently a famous Bombay dish, made unique by its use of Parsi dhanajeera powder. She said that garam masala could sub, so I took a halfway route and kind of guestimated how much of various spices to add to my garam masala (the Parsi spice blend is much bigger than a basic garam masala). I will provide the full recipe for the powder below, but know that I did not make the powder straight out. However the legumes, which were cooked in the powder I approximated, were some of the best “plain” (no veggies or ghee flavoring added) lentils and split peas I have ever had. I highly recommend either making or approximating the powder, whichever works best for you. I plan to make some of the bulk powder (in a small quantity) to use in the future. 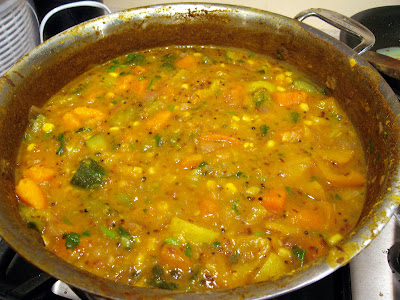 Josie and I both agreed that this stew was fantastic with tamarind and date chutney, although in retrospect that could be because I left out the tomatoes. If you don’t have any sweet and sour chutney around, you might add a bit more lemon juice and some brown sugar to taste. I liked this stew with rice, but Josie felt that was a waste of stomach space. The rice is traditional according to Sahni. 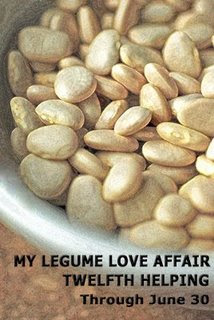 I am submitting this dish to one of my favorite regular blogging events, Susan’s My Legume Love Affair. The 12th helping is coincidentally and happily vegetarian this month. It’s being hosted by Annarasa: Essence Of Food, so head on over there early in July to check out the round up.

This is not at all a complex recipe, although it does take about 1 1/2 hours (including cooking time) to prepare. However, unlike Western soups and stews, it is built by adding layers–first the legumes are cooked, then the veggies are added, and then last the flavoring ghee is added. So while the directions may look complex, as though you are making 3 different dishes, you really are not.

Start the legumes: Put all of the legume ingredients into a large (at least 5 qt, I used 6 qt) pot and bring them to a boil. Reduce the heat to medium and briskly simmer, partially covered, until the split peas are fully cooked but not mush. This will take about 35-40 minutes.

Add the vegetables: Add all of the prepped vegetables along with 2 cups of water to the boiling legumes (I missed that at first and thought they cooked separately). Continue to briskly simmer, partially covered, for 20 minutes until, until the veggies are fully cooked but still hold their shape (Josie requested softer veggies, so we cooked ours longer). When they are done, turn off the heat and add the flavoring ghee (see next).

Meanwhile, make the flavoring ghee: Measure out the all of the ghee ingredients and have them ready by your cooktop (in separate piles). Heat the ghee in a small frying pan over high heat. When it is very hot, add the mustard seeds and cover with a lid. Let them pop for about 30 seconds or until they slow their popping and then add the cumin seeds. When the cumin begins to darken, add the chopped onion and cook it, stirring, for about 5 minutes, or until it turns brown (mine took longer as I was working from too small of a burner). Add the garlic and let it cook an additional 20 seconds. Add the lemon juice and coriander and immediately pour the contents of the pan into the finished stew. Mix gently to distribute the seasoning. Salt to taste.

Preheat the oven to 225 F. Put everything except the saffron and nutmeg in a large roasting pan and spread them out to make a single layer. Place the pan on the bottom shelf of the oven and roast for 30 minutes or until the spices are lightly browned. Mix and turn occasionally to prevent burning. During the last 5 minutes, add the saffron and nutmeg.

Remove the spices to cool. When they are cool, grind the spices in a spice mill, mortar and plestle or coffee grinder. Store in a cool, dry space up to 3 months.