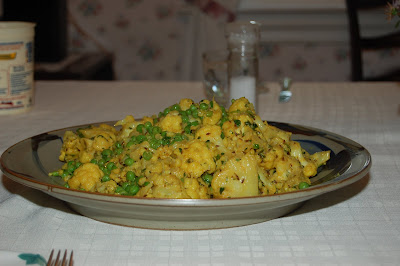 So I was flying blind to some extent, counting on the vindaloo to rescue me if it all went down the tube.
Luckily that was not needed. 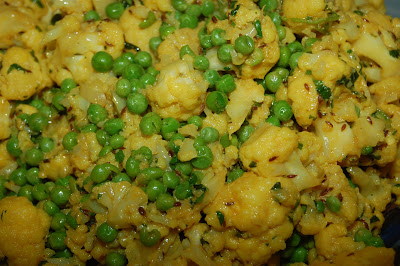 This dish complemented the pungent vindaloo well, as it is a mild dish.  The peas–not native to India as I have recently learned, but oh such a perfect and welcome addition to the family–are perfect in this, making me think maybe cauliflower, like potatoes, cry out for peas in Indian cuisine.
You might be tempted to reduce the ghee in this dish.  Do not, or at least not by much (or you could try mixing it with oil).  Just think of the cauliflower as being served in a butter sauce–the ghee is crucial to the success of the dish.  It is the nutty, tasty conduit for the other flavors in the dish.
**Special thanks again to my mother in law for taking all of these photos.** 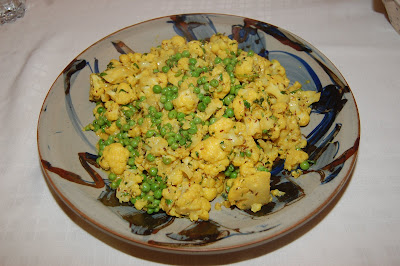 Gobhi Hari Matar Sabji (Sauteed Cauliflower & Green Peas)
Adapted from Lord Krishna’s Cuisine: The Art Of Indian Vegetarian Cooking, Yamuna Devi
4 T ghee
1 T minced ginger
1 1/2 t cumin seeds
1 bay leaf (she also suggests curry leaves, since I was out of town the bay leaf was easier)
1 large (about 3 lbs) cauliflower head, trimmed, cored and cut into flowerets
1/2 t turmeric
heaping 1/4 t cayenne or paprika
1/4 cup chopped cilantro, split in half
1 1/2 cups peas (I used frozen, if using fresh add them earlier)
2-4 T water
1/2 t salt, plus more to taste
1/3 cup plain whole fat or low fat yogurt (I used whole fat but I think low fat would work)
Make sure your pot is large enough to comfortably hold the cauliflower–and to be able to stir and toss it.  Devi calls for at least a 5 qt pot.  Heat the ghee in the pot until it is hot but not smoking.  Add the cumin seeds and bay leaf and roast them in tho oil until they have darkened and are fragrant.  Add the ginger and fry it for about one minute, stirring.  Add the cauliflower and stir-fry it, tossing, for a minute.  Sprinkle it with the cilantro, turmeric and cayenne/paprika.  Stir fry until the cauliflower has lightly browned.
Add the water (and fresh peas if using fresh), cover and reduce the heat to low.  Cook for 15-20 minutes, stirring occasionally.  Add the frozen peas for the last 4 minutes of cooking.  When the cauliflower is tender-crisp, turn off the heat and add the remaining cilantro and the yogurt, and toss.  Taste for salt.
« Tried & True Goan Style Vindaloo
Strawberry and Rhubarb Crumb Pie in a Skillet Crust »