You are here: Home / chickpeas / Tomato & Chickpea Salad with Basil and Yogurt Dressing 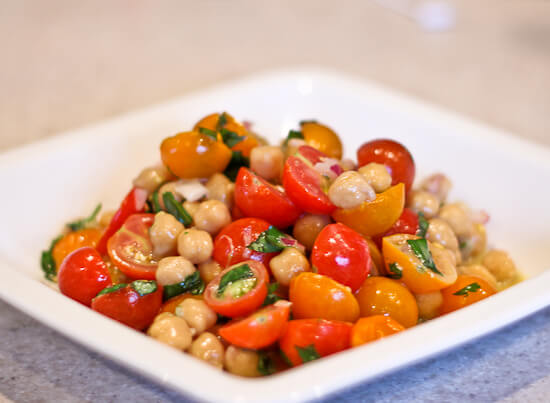 Skamp had the big Snip Snip done last week. I am not sure he cares much about his missing testicles, but he is definitely not thrilled by his cone of shame (shame because we tried to go without, but that dog would not stop licking!). 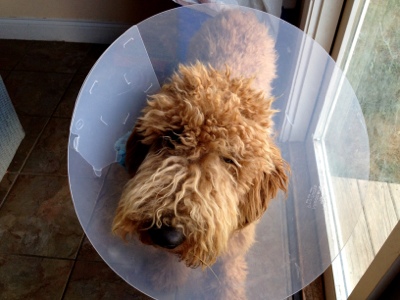 He is also seriously not thrilled by the lack of activity. Skamp thinks running and wrestling–especially with other dogs, see below–is one of the best things on earth. So after 5 days of enforced leisure time we are all going crazy. And if you are wondering, by the way, he is 56 pounds and 8 months old. Yes that is a mite larger than anticipated! 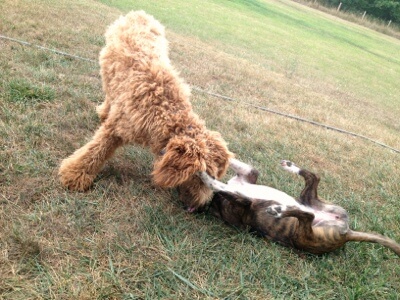 While he is still not 100% trustworthy, he is allowed to sleep in each girl’s room overnight (they take turns) as long as their room is clean. For the most part this has worked out ok, but recently Sammy’s room got a little chaotic, so John declared it was time for another book purge. Book purges are a necessary evil at this age, as kids are learning to read, because once they start to figure words out it just goes faster and faster. And to make matters more difficult, both of them take after their mom. I am a very fast reader and so are my girls, which means even with voraciously using the library, we still have books coming out of every nook and cranny of this house, most of them read multiple times.

You know how some moms mourn the adorable clothing their precious darlings grow out of? I mourn the books. I drove John batty, grabbing books left and right and insisting on keeping them. Picture books that we read to our girls so many times we had the words memorized. I finally promised him I would clear some space on existing adult bookshelves, and we will keep the books for visiting children, nieces, nephews, and, dare I say it, grandchildren. (And I won’t lie, part of me wants to go buy some other favorites in hardback that I opted not to keep just because they were paperback.) 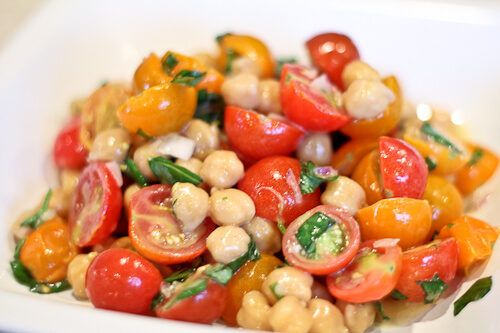 So about this salad. This is one of those blueprint deals, because I made this when John was out of town. I cannot think of anything less conducive–except maybe a dinner party–to getting a recipe written down. I just want to make it, eat it, and then get those kids to bed! 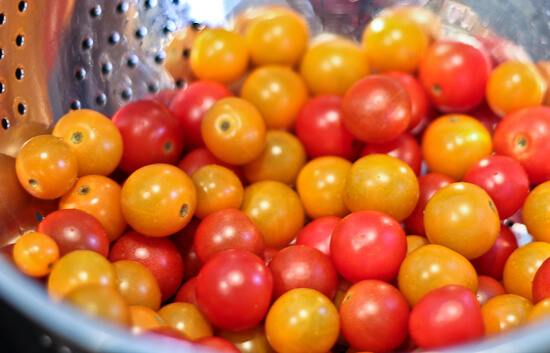 The first and most crucial thing is to start with gorgeous cherry tomatoes, preferably in season. I love the Sungold tomatoes (the yellow-orange ones above) that crop up everywhere around here every summer, but the red makes a more visually pleasing salad, so I used both. 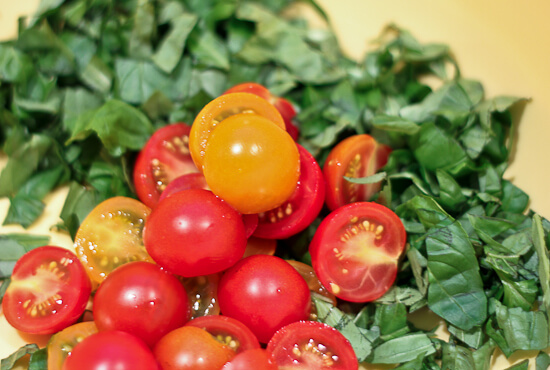 Fresh chopped basil is another must, and yet another reason this salad does better in the summer. And for me personally–although I won’t insist that anyone else do it–I only like this salad with home cooked dried chickpeas. The salad has only a few ingredients, so what you have should be of the best, most flavorful quality. For me personally, that means chickpeas cooked at home, in water with some extra virgin olive oil, chopped onion, garlic, and, added at the end, salt. Toss the cooked and drained (or rinsed and drained for canned) chickpeas with the sliced tomatoes and basil.  An optional add-in, that I did use, is finely chopped onion. I soaked sliced onion in cold water to calm the onion down (because otherwise raw onion bothers my stomach), and then finely chopped it.

For the dressing, I used Greek yogurt, lemon juice, a little white balsamic vinegar, ground cumin, salt, pepper and extra virgin olive oil. I started with a tablespoon or two of the yogurt and started adding other stuff to taste.  Alex and I, who both adore chickpeas, devoured the salad. Sammy was a little less gung ho, but she is not a very big fan of chickpeas. Ignore Sammy–it makes a fantastic simple summer supper! 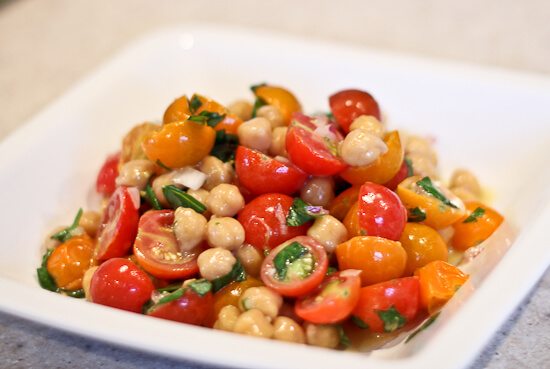