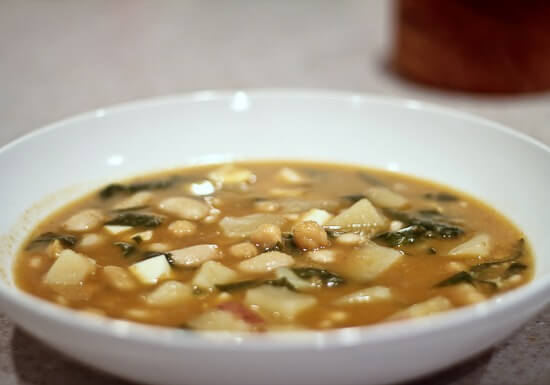 This time of year always brings with it a dilemma: you want healthy and light after weeks of feasting but at the same time for many of us it is cold outside and we want warming and hearty.  Year after year I seem to turn to the same solution: bean soup.  Last year it was the absolutely fabulous New Year Noodle Soup and this year it was Potaje de Vigilia, a Spanish “fasting” soup for Lenten days when meat is forbidden.

From what I gather, there are versions of this soup all over Spain.  I think, but am not certain, that what they have in common is chickpeas and bread to thicken the soup.  They might also usually have spinach and potatoes.  If I sound wishy washy, it is because I really don’t know anything about the soup, except I happened to come across 2 different versions of it from 2 different regions of Spain in 2 different cookbooks–and decided I would take what I liked best from both recipes to come up with my own.  Which means mine is probably not very authentic but oh my lord it was delicious. 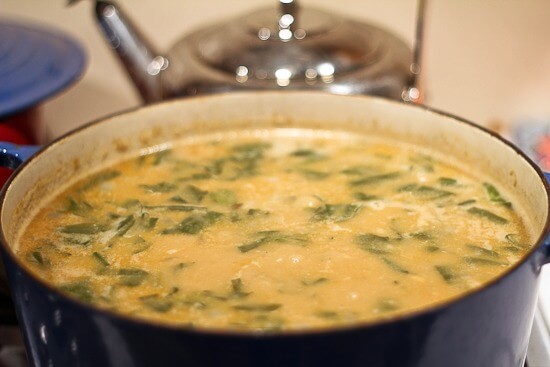 So where did I find it and what versions?  First I found an Andalusian version from Clifford Wright in his book The Best Soups in the World

.  It intrigued me, and when I realized it was a traditional Lenten soup I figured I might find some versions of it in some of my other Spanish cookbooks.  I forget if I checked all of them, but I did indeed find it in Claudia Roden’s outstanding  The Food of Spain

.  Her version is Castilian, and she refers to it as a spinach and chickpea soup, with a meat free version during Lent.  If you have ever wanted a window into how I cook, this recipe is a great example. When it comes to traditional food, I like to find as many different sources for the recipe as possible and then take what I like about it and fiddle. Wright’s version had more vinegar, which I liked, whereas Roden’s version had more interesting spices, notably the cumin.  They both had spinach, potatoes, fried bread, paprika, chickpeas and hard boiled eggs.  Because of my own interest in heirloom beans, I chose to use a mix of beans that I thought sounded compatible (chickpeas, and cannellini and rice beans from Rancho Gordo).  I also drastically (to my mom’s sadness but my family’s happiness) reduced the spinach.  What can I say?  I figure having them happily eat a soup with some spinach is better than refusing to eat a soup with a lot.  And, ahem, it might be a dislike that was passed from mother to child in this instance–the biggest difference being I have matured and no longer pick around the cooked greens but instead just eat it with everything else. As long as it is not too overwhelming. 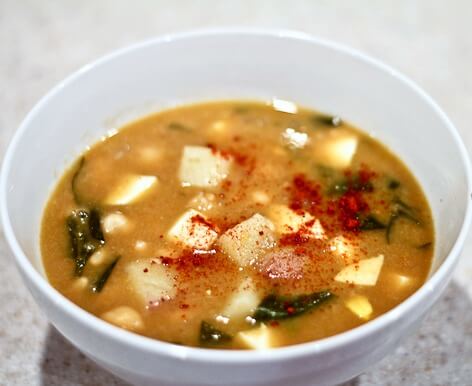 As with many of my recipes, this makes a lot. We ate it all over 3 nights. Each night it was better, and I would make just as much the next time. The bread is a hassle, but a minor one, and I would suggest you skip the soup completely if you do not want to take the time to fry it and puree it–it absolutely made the soup. When you are in the midst of frying it, it might not seem like the healthiest thing in the world, but remember you are frying it in olive oil, it will be pureed and split between many servings, and also it is the only real source of fat in the soup aside from some minimal oil and the eggs.  Don’t be scared off by the hard boiled eggs either–my husband is not a fan and never even knew they were there.  They add some great protein to the soup (unless you are vegan of course).  I followed Wright’s instructions and pureed the yolks into the bread puree, but you can also do as Roden suggests and just chop the yolks with the whites.

The soup is not as complicated as it looks–but I find it easier to think of most bean soups, and especially this bean soup with its fried bread puree, as being several recipes that are ultimately combined. 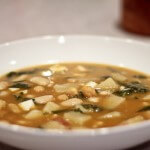 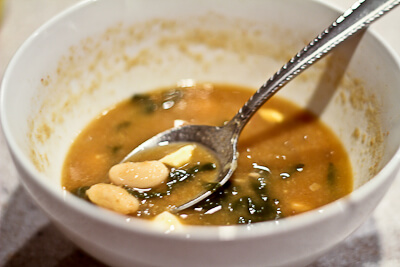 Amazon affiliate links were used in this post, but only to link to products that I would be discussing and linking to anyway.