I have had a potentially life altering revelation today. Well, life altering for me, anyway. It all started with my Taste & Create partner, Simran from Bombay Foodie. We have been paired before but this was no disappointment because I love her blog and I love the food she makes. After a short time skimming her pages, I found a paneer curry, and remembered that I actually had real paneer in my freezer for once and so my choice was made. 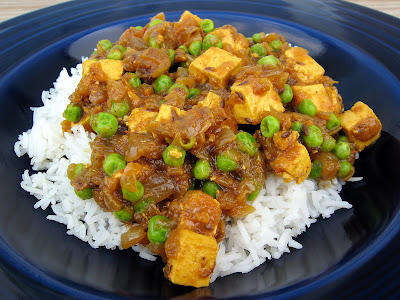 The recipe calls for 2 tomatoes–normally, in the past, I have used canned tomatoes. Very high quality canned tomatoes, the same ones that have worked successfully for me in many other recipes. But today, I had just picked my first gigantic heirloom tomato (my mom sent me the plants so I have no idea which breed exactly) and I thought to myself well it is probably always tomato season in India, so even though I think of curries as made with canned tomatoes maybe I should give fresh a try. Gorgeous just picked heirloom fresh, no less. I gave myself several hours to make the Punjabi Home Style Paneer Curry–which when you look at the recipe you will realize is kind of insane. But here is the thing, in the past I have attempted allegedly simple Indian curries (tomato-based) and found they required much longer simmering than the recipe claimed to get rid of the overly acidic tomato taste.

Apparently that taste was caused by using canned tomatoes. I am mortified to confess that while I have always accepted the vast superiority of fresh picked tomatoes raw, I have never really believed that it would make much difference in a well-cooked sauce. Oh when I am wrong I am sometimes really wrong. This was amazing. Barely any work and done in about 45 minutes. It has left me with a terrible dilemma now though–would frozen tomatoes suffice (frozen right after picking, I mean) to use the rest of the year? Should I make a whole bunch of curries and freeze them all? I cannot go back to the canned taste, not after this. My only change was to add peas and sprinkle salt on the onions while cooking to release their water. I used one super huge heirloom tomato and then supplemented with 2 quite small zebra tomatoes, all from my garden (wish I had taken their pictures now). The zebra tomatoes account for the less red nature of the curry, since they are yellow/green when ripe. I did not peel but instead just processed the tomatoes with my immersion blender in its jar. My onions were medium to big. As always, I used a paprika chili powder to eliminate heat issues for my kids and served with cayenne pepper for John.