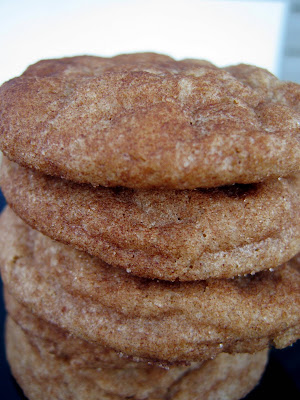 When my October Saveur came in the mail and I saw Cinnamon plastered across the corner of the cover, I immediately flipped to the article. And I am an obsessive front to back in order kind of gal, too! The article did not disappoint, with 5 desserts and several savory dishes as well. You might have thought I would have chosen something other than Snickerdoodles, which I just made a month or 2 ago. But you would be wrong. 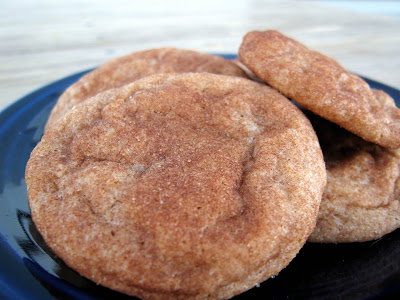 First of all, I’ve been sick, so honestly something easy like a cookie sounded best. Especially something which gave me a reason to turn on my oven given that my house thermometer read 53 degrees this morning! (OK I like to leave the windows open in the fall.) Second, it is fall, and fall says cinnamon baked goods. Third, and sadly I have no link because it is not on their website, but Saveur’s photo of the cookies had me drooling. Thicker than the ones I made earlier in the summer, and darker, they said “We are sufficiently different and sufficiently delicious–MAKE US NOW.” So what was I to do? 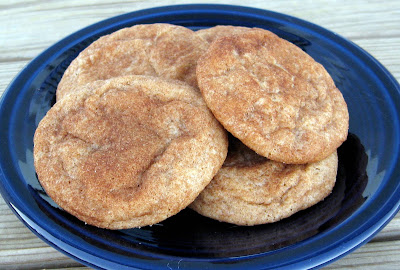 As far as how different they were from my previous Snickerdoodles (Nancy Baggett’s recipe) the answer is Quite. They are thicker, and the texture is a mix, let’s say 60% chewy and 40% soft/cakey, so not quite as chewy as the other batch. They are also the cookie you should be making if you really want cinnamon. Baggett’s recipe uses 1/2 teaspoon of cinnamon to 3 1/2 cups of flour–this one uses 2 teaspoons of cinnamon to 3 cups of flour! They are equally addictive–in fact I had to go get one right now because writing about them had me craving one. 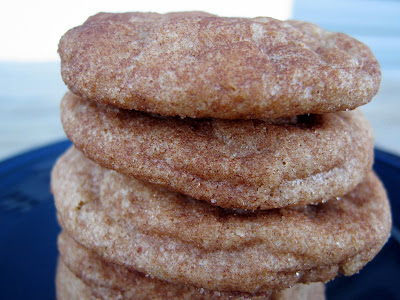 Whisk together the flour, cream of tartar, salt and baking soda. Set aside.

Beat the butter and sugar on medium speed until light and fluffy, about 2 minutes with a mixer. Add the vanilla and cinnamon–Saveur points out that the ample butter draws out and enhances the flavor of the cinnamon; I think it is important to add it here, instead of with the dry ingredients. Beat for 1 more minute. Add the eggs, one at a time, and beat well after each addition. Remember to scrape down the sides and bottom of the bowl as needed. Add the flour mixture and mix on slow just until combined. Cover dough tightly to prevent drying and chill for at least 30 minutes and up to 4 hours.

Preheat the oven to 375 F. Whisk together the remaining sugar and cinnamon in a wide, fat bowl. Scoop out tablespoon sized balls of dough, roll them quickly into a bal and then roll them quickly through the cinnamon sugar. note: my daughter rolled them way too long (she’s 40 and some of them became dry with cinnamon and no sugar stuck. They baked fine, but the sugar would be preferable so do not let your small child roll forever. Place the balls 2 inches apart on a parchment-lined baking sheet. Ideal for me was 3 across and 5 down; when I made them just a tad smaller, and got 4 across, the cookies baked flat. Bake about 10 minutes, until golden brown. Cool for 5 minutes on the sheet and then transfer to a cooling rack. 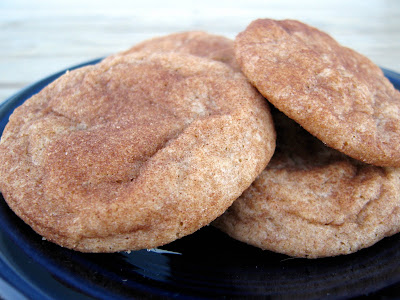