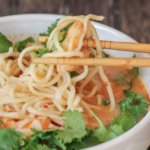 Creamy Tom Yum with Ramen Noodles is an explosion of flavor in a one pot meal that everyone will adore. I received a copy of Bangkok from the publishers in exchange for an honest review. Affiliate links have been used in this post to link to items I am discussing. 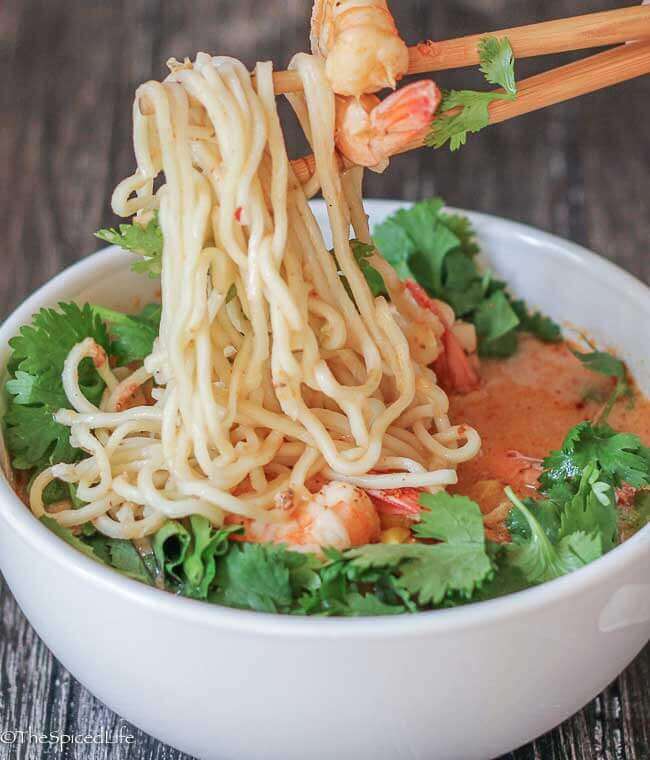 People, I am convinced that life is just a series of two steps forward followed by one step back. I was really getting into the swing of things, I was blogging if not often at least regularly, and then boom. Stomach bug. (I heard it is everywhere–what is up with a stomach bug going around in August??) We have not seen any gut infections since the kids were in preschool, and then we have had two this past year. And without going into details, I will just say that all evidence points to the fact that all of those abdomen surgeries I have had that left a lot of scar tissue mean my intestines do not shake germs easily. My mom was sick two days, John one day, and I was sick a whopping 7 days.

But enough about that because who wants to think about it? Especially when you could instead be thinking about this Creamy Tom Yum with Ramen Noodles. No competition, right? 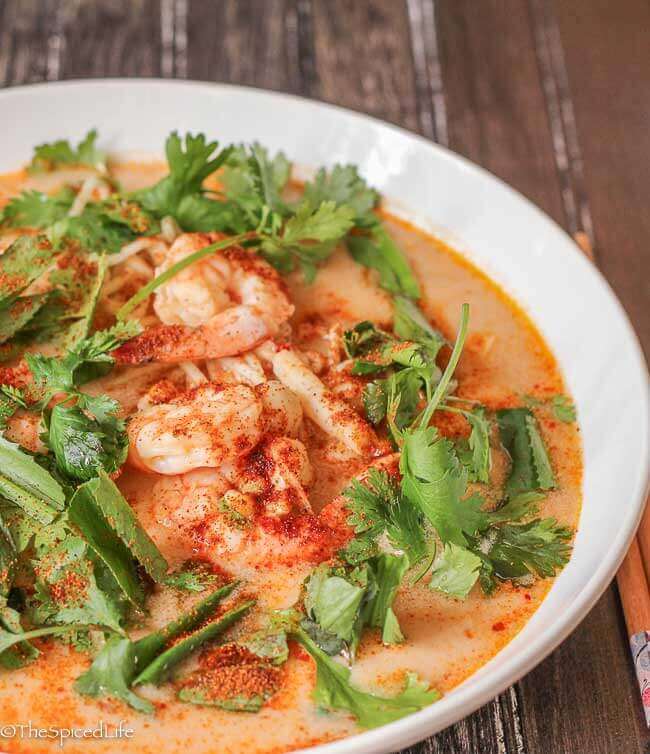 This Creamy Tom Yum is closely adapted from Leela Punyaratabandhu’s Bangkok: Recipes and Stories from the Heart of Thailand

, the last of the stellar 10 Speed Press cookbooks I was sent to review. This one took me a bit longer to review because of ingredient sourcing. But I saved the best for last because I adore this cookbook. Leela’s blog She Simmers continues to be one of my favorite blogs, and her writing–whether on screen or on paper–is pretty much the best food writing out there. The book is a celebration of the city of Bangkok specifically, so you will not find northern Thai specialties here or dishes from any other region of Thailand. But what you will find is love. Love for the people and cooking of Bangkok–no matter how “inauthentic” some of that cooking gets (for example, this soup with its ramen noodles and evaporated milk). Leela celebrates the authentic and the inauthentic, and I love that about her food. She will give a nod to the “one true way” and then diss it all the same, making it clear that authenticity only deserves so much respect. 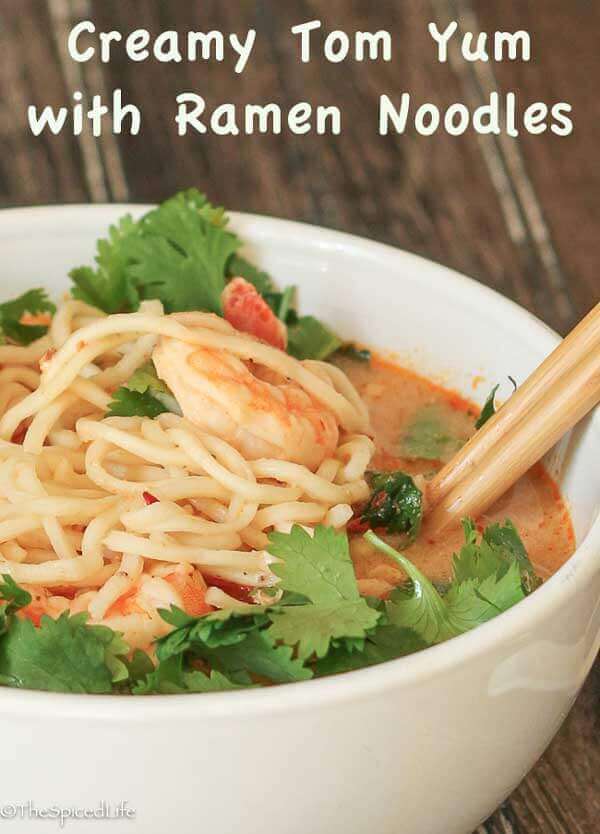 This Creamy Tom Yum is a prime example of that dichotomy at work. On Leela’s end, her headnotes make it clear that this recipe deserves a chuckle because authenticity purists will be tempted to use coconut milk in the soup (and you can if you are avoiding dairy), but no matter what they claim, the fact is that the street vendors serving the best examples of it use evaporated milk. On my end, I gave my best shot at making the soup with the authentic option of fresh river shrimp tomalley–and finally settled for a mystery  “mei head shrimp paste” (much too liquid to be paste) Chinese ingredient sold in the cooler at my local Asian market. I still have no idea if it was correct (and bless Leela, who retweeted my picture of the ingredient in the hopes of helping me figure it out), but it really doesn’t matter because this soup was amazing. 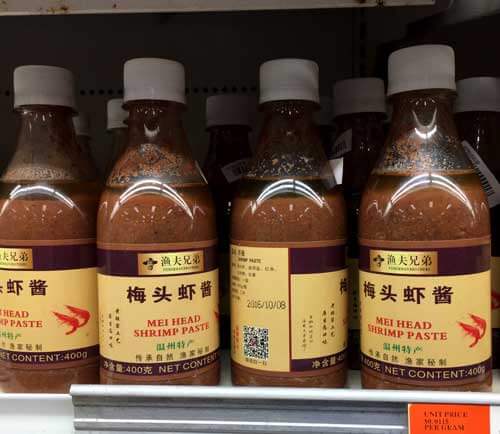 But what if you do not have tomalley or my mystery ingredient? You have a few options. First, you can buy the book and take a whack at making her “faux shrimp tomalley.” Second, you could try making it without it (she refers to the tomalley as optional but recommended). Last, you could do what I did–use this Creamy Tom Yum as a reason to go wandering in your local Asian markets and take a risk on an ingredient. You would be surprised at how often that works out–and honestly as long as you use some kind of shrimp ingredient it is unlikely to be too awfully wrong. Think of it as an adventure! 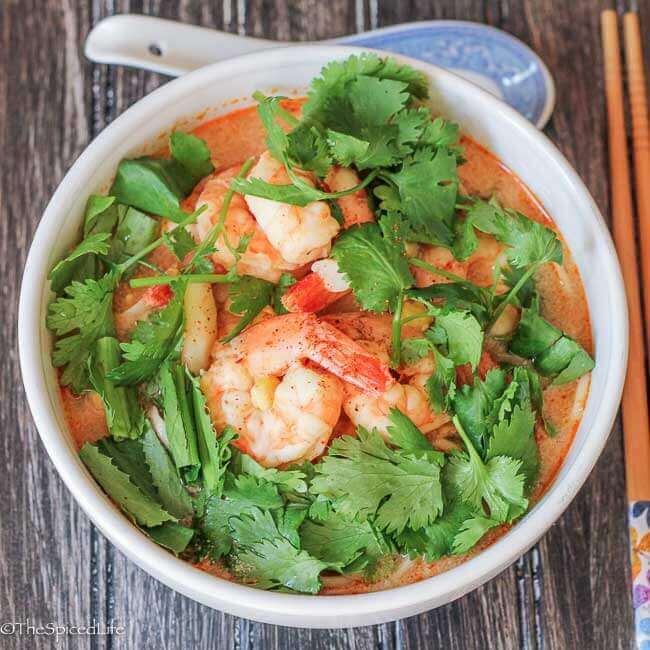 I served this Creamy Tom Yum one day when my mother in law was visiting–and it was a huge hit with everyone. We all agreed that the mushrooms and corn–my additions–were perfect for a one pot meal, but do not feel you have to add those. You could take a stab at some other seasonal ingredient or serve it without, which is the traditional option. I just wanted some fiber and additional textures since I was only serving the soup with its noodles, no other dishes. If you cannot find sawtooth coriander (culantro), don’t fret, just use extra cilantro. The two herbs are pretty similar (and if you are one of those people who tastes cilantro as soapy, well, you have my condolences… maybe try some Thai basil?). This dish and this cookbook are both run don’t walk to try them recommendations from me! 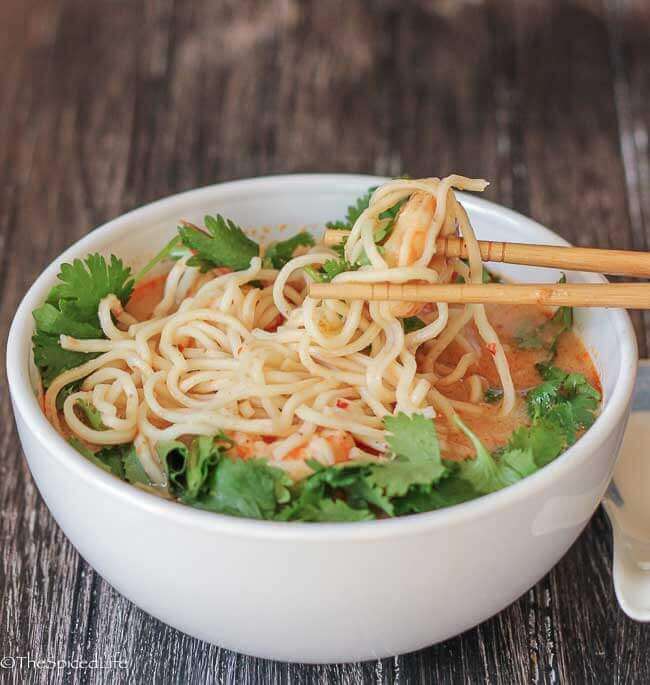 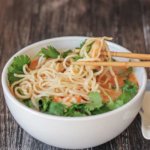 This recipe is closely adapted from Leela Punyaratabandhu with 2 exceptions: corn and mushrooms. I wanted this dish to serve as a one pot meal, so I felt it needed some additional veggies (or funghi as the case may be). Feel free to add whatever sounds good and is seasonal, or serve a salad on the side and serve without additional add-ins.

* In the past I have referred to makrut leaves as kaffir lime leaves. It has come to my attention that the roots of the word kaffir are actually racist and derogatory in South Africa. I used the word in ignorance, but now that I know I am making an effort to call it makrut, which is what South East Asians actually call the leaves.