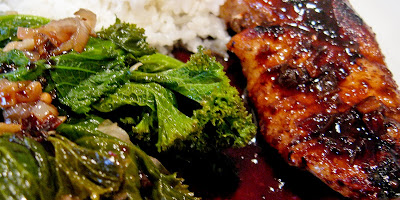 No one in my family is sick.

This may not seem like an earth shattering revelation, but it is for me. We can GO places, you know? The grocery store (check), the local ice cream shop (check), the ohmigosh it is 60 degrees and sunny out park (check), playdates (check), ballet practice (check), swimming lessons–oh wait, they ended while we were sick so that was money well spent (NOT). The excitement is unending. And yet somehow I am still supposed to make dinner.

I don’t want to make dinner! Oddly, I was more in favor of spending time in the kitchen when I felt crappy than I am now that I am finally free to get the heck out of my house. So easy, fast dinners have been the name of the game (forget about dessert). And this one definitely qualified.

As many of you know, fish and greens (cooked greens) are 2 things I have been determined to teach myself to like. For health reasons, but also because I am frankly just jealous of the pleasure other people take in them. I was reading Sippity Sup the other day and Greg had posted this beautiful braised mustard greens dish. It just seemed like something I should like. Does that sound crazy? So I made some changes to fit the overall theme of my dinner and took a stab at it. 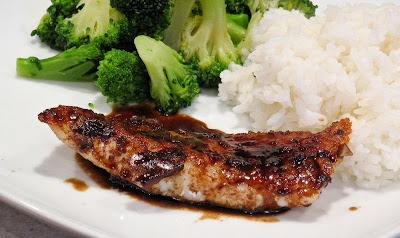 The results were mixed. For those of you jealous of my kids’ usually wide ranging diet, rest assured they are very suspicious of cooked greens like every other kid out there (it doesn’t help that their parents feel the same!). Alex flat out did not like them. Sammy was convinced to eat them on the idea that it was just lettuce (that kid can sit and eat 2 lbs of raw lettuce sans dressing no lie) but she thought they were too spicy. John initially said yuck but then later decided they were “ok”–he did eat them all. I liked them but did not love them. Honestly though that is big progress for us, which makes me think that the recipe is pretty darn good. It only marks the second plain greens (i.e., greens on their own, not part of soup or stew, etc) dish I have ever enjoyed. The important element seems to be something acidic (vinegar especially) being added to the greens. And I was ok with the mustard greens flavor, unlike for example beet greens which frankly revolt me. So if you like greens give this recipe a try. 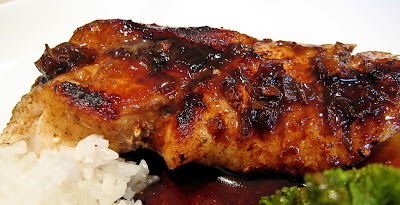 We loved the fish. It was such a success that I made it again the second night with the leftover glaze (I purposefully made a lot)–but I served it with broccoli this night as I was out of greens (truly). I took more pictures because I was unhappy with the photos the first night, so that is why there are not as many pictures of the greens. Sammy in particular went crazy for this preparation–she demanded more fish long after I was out and was outraged when I could not comply.

These 2 dishes certainly do not need to be made together, but I thought that the balsamic glaze made a nice addition to the greens (and gave the dish continuity). If you are not making the fish, substitute either red wine vinegar or plain balsamic vinegar. I know most people think of salmon when they hear balsamic glaze, but I do not care for salmon. Obviously try using it if that is what you like. Both nights I served the fish with a Japanese style white rice, although brown would work as well. 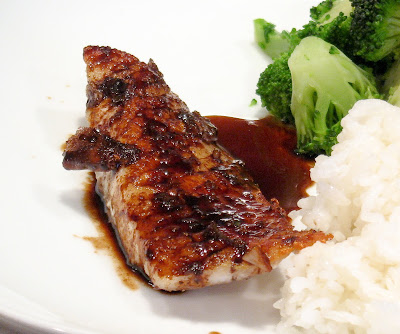 Heat a medium saucepan over medium heat. Add the oil and when it shimmers add the garlic and shallots. Fry, stirring, until they soften, about 5 minutes. Add the rest of the glaze ingredients (through oregano) and whisk together. Simmer for 5 minutes, until thickened. Taste for salt, pepper, or even brown sugar if it needs to be a little sweeter.

Heat a large nonstick skillet over medium high heat with the 1-2 tablespoons of oil in it. When it is shimmering, add the fish fillets. Fry until golden and flip. After flipping, brush with the glaze. Cook until done, remove and flip to the other side and immediately brush with more glaze. Reserve the glaze–everyone wants a different amount plus you will use it for the greens recipe. 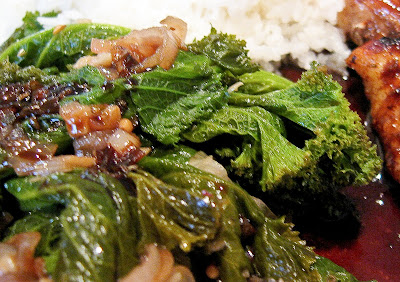 2 T olive oil
3 large shallots, thinly sliced
5 cloves garlic, minced
1/4 t yellow mustard seeds
pinch (to taste) red pepper flakes
1/2 cup white wine (whatever you like to drink, nothing too sweet)
1 lb mustard greens, washed and left whole (Greg says to trim the thick stems, I was uncertain how much to trim and ended up trimming little)
1 T of the balsamic glaze above (or red wine vinegar or balsamic vinegar)

Using a large saute pan (I used my All Clad 14 inch), heat the oil until it shimmers. Add the mustard seeds and heat until they pop, about 30 seconds. Then add the shallots and garlic and cook until softened and starting to brown. Add a pinch of salt and the red chile pepper flakes. Add the white wine and simmer briskly for 1 minutes. Add the greens, placing in them a single layer as best as possible, and cover with a lid. Toss the greens every 5 minutes, braising for a total of 15 minutes. At the end, when they are wilted but still bright green, add the balsamic glaze and toss them thoroughly to coat with the glaze. Salt and pepper to taste.