You are here: Home / chickpeas / Are You A Lunch Person? 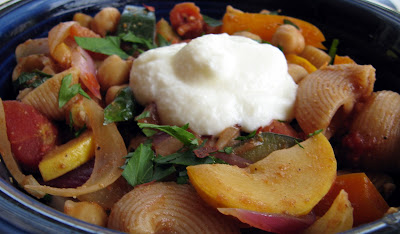 For me the answer is a resounding NO. I predict right now you will never see a sandwich recipe on this blog. I mean, I like some sandwiches, but they don’t excite me and I avoid eating at restaurants and delis that only offer sandwiches. Lunches at my house consist frequently of finger food for the kids and me grabbing a frozen meal.

But about 2 times every 3 weeks (in other words not weekly, but more often than every other week), I make a big noodle toss for me and the kids that we eat for several days in a row. They tend to follow the same blueprint: I saute some onions and jarred garlic (that’s my first rule of thumb: I unashamedly use jarred minced garlic or ginger for lunch recipes since whipping up cooked food at lunch in addition to dinner is time-consuming–so shortcuts, in my book, are acceptable at lunch) and then start throwing in spices and other veggies, frequently some legumes. Then I throw in a big bowl of whole grain pasta, toss it together, and serve. My favorite variations tend to be Mexican, Moroccan or Middle Eastern in inspiration. 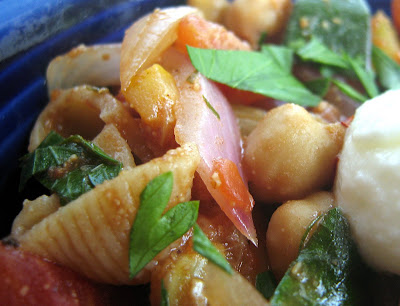 This one is vaguely Middle Eastern. Or maybe Moroccan. Or maybe a mish mash. I wish now I had served it with smaller noodles, because my girls, like most toddlers, like the noodles and chickpeas the best. To their eyes this one had a lot less noodles since one toddler serving had only 4-5 noodles. I also think next time a handful of golden raisins might be nice in it. 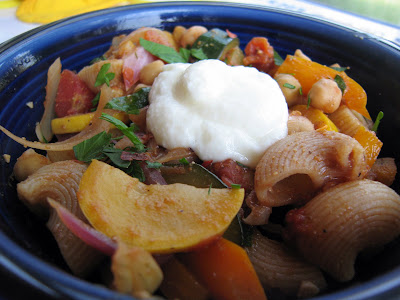 Bring a large pot of water to boil.

Heat up a large skillet on medium high heat. Depending on whether it is nonstick or stainless steel, drizzle a very little oil or a tablespoon or 2 into the pan, and heat it up. When it is shimmering, add the garlic and let it toast briefly, 15-30 seconds. Do not let it burn. Add the onions and cook until caramelized, about 10 minutes, stirring occasionally. Sprinkle with salt.

While it is cooking, slice and add the following (and add it this order, since some items take longer to cook than others): zucchini and squash, sweet bell pepper and chickpeas. When the onion has totally caramelized and the zucchini is a little tender, add the spices and stir. Do not allow the spices to stick and burn. 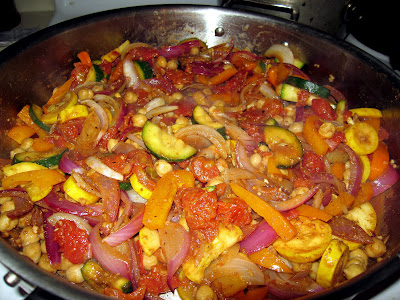 Add the pasta to the water and cook.

Add the juice of half of the lemon to the pan to deglaze it. Then add the tomatoes. Stir the mixture and bring to a boil. Reduce the heat to low and cover the pan. Let it cook for 10 minutes, in which time the pasta should finish and be drained.

Taste the “sauce” for salt and pepper. Add the cooked noodles, the juice from the remaining half of the lemon, 1 tablespoon of chopped parsley and toss. Serve with a dollop of plain yogurt–Greek style is best but regular will do, and an additional sprinkle of parsley.