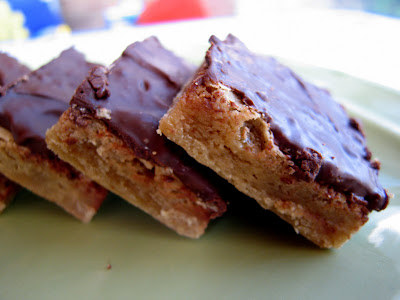 I was looking through my dessert cookbooks the moment I tasted that blueberry custard pie. There is nothing more frustrating than craving dessert and realizing you have none–at least for us sweet tooths anyway.

I am sure some of you may have noticed that I am a Scharffen Berger fanatic. I just find their chocolate to be utterly and completely sublime. So it is no big surprise that I shelled out for John Scharffenberger’s and Robert Steinberg’s The Essence Of Chocolate: Recipes For Baking And Cooking With Fine Chocolate. It is a gorgeous, heavy cookbook, with glossy pages and beautiful photos of recipes contributed by loads of famous bakers (and some from the authors themselves), using Scharffen Berger chocolate. So when I realized I was in the mood for chocolate, this was where I turned.

These Brown Butter Blondies With Milk Chocolate really made me question the definition of what a blondie is. To some people blondies are full of nuts, chocolate chips and coconut (ugh). Growing up, we always thought of blondies as chocolate chip cookies in bar form, which are pretty perfectly embodied by that America’s Test Kitchen recipe. These blondies were entirely different from those. I initially sliced them like my previous blondies have been sliced, but quickly realized that they were way too rich for that and cut them all in half. These things are nearly like eating candy (not a bad thing). I have also never seen the chocolate melted into a top layer on top of the blondies, rather than chips inside of the dough. Melting it into a layer really emphasizes the use of milk chocolate, which complements the brown butter flavor nicely. These blondies are also unique (and more similar to brownies) in that they do not use any leavening agent. 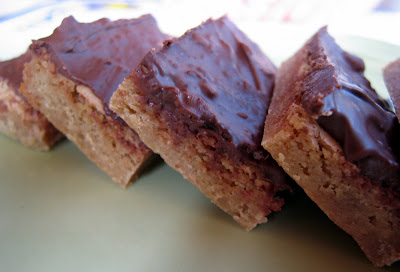 What do you think? Are these blondies?

Anyway, whatever they are, they are really delicious. I hope you give them a try. 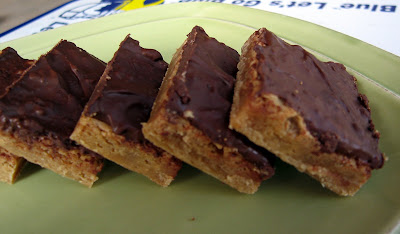 Brown Butter Blondies With Milk Chocolate
Adapted from The Essence Of Chocolate: Recipes For Baking And Cooking With Fine Chocolate

Preheat the oven to 350 F. Grease and line a 9X9 baking pan with parchment paper (foil will work too but make sure you butter it). Leave some hanging over the edges so that the blondies can be lifted and removed from the pan.

Place the brown sugar in a large bowl and set aside.

Place the butter in a small sauce pan and place it over low or medium low heat (you might start low, the instructions say low, but I needed medium low). Tilt the pan occasionally and watch the butter carefully. The solids will separate out and the butter will sizzle. After about 5 minutes it will develop a light brown color and start to smell toasty or nutty. At this point–watch it carefully so it does not burn–pour it over the brown sugar. Add the salt and whisk together. It may separate or seem greasy at this point, which is fine. Add the egg and vanilla and whisk together until smooth. Add the flour and fold gently until absorbed.

Let cool for 10 minutes on a cooling rack. Then remove the bars by using the parchment paper and let cool completely on the cooling rack. After the chocolate has mostly but not totally set, slice into bars.

« Are You A Lunch Person?
Stewed Summer Green Chicken With Beans And Corn »