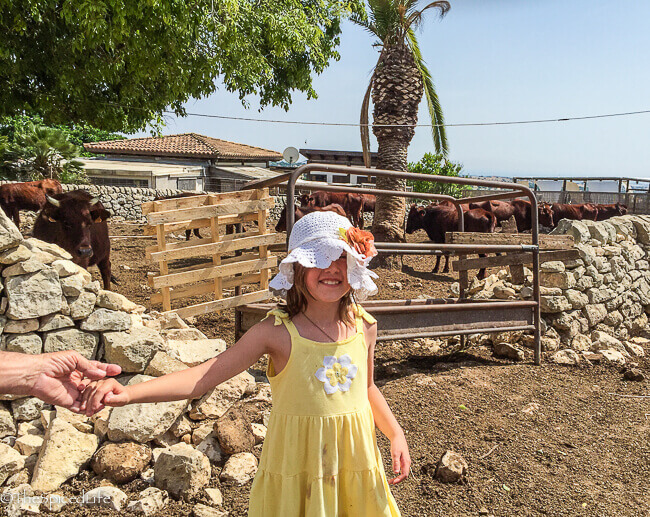 I’ve been avoiding this post. Not because of anything bad–we had a fascinating and fun time–but for a variety of reasons we ended up on a tour where we had no idea what we were touring. Which presents some problems in describing it for you.

The story starts with a language barrier and ends with a family running a bed and breakfast and apparently not hiring enough help after they had a baby. It also includes the possibility that said family’s sister’s B&B, whom they referred us to, maybe just maybe was being paid by the tour workers to push us in the direction of their tour. They promised it was a food tour and would include hands on experiences with livestock. The above picture is the closest we got to livestock–and only then because our driver was completely smitten by Sammy and took her to see the cows.

But there is some food, so read on. 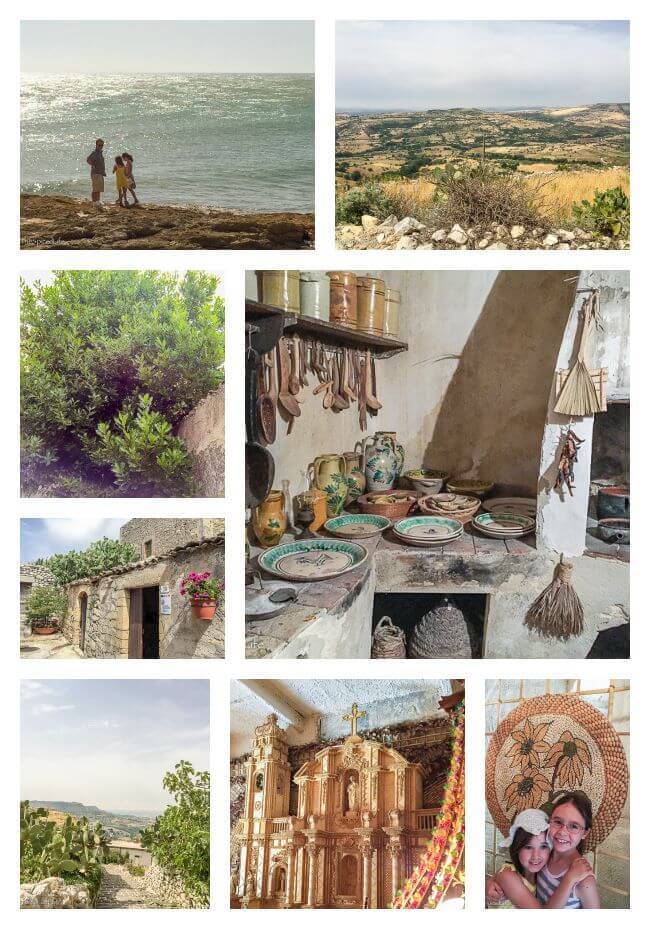 All of the pictures above except the beach were taken at Buscemi, a village that has been settled since the ancient Greeks, but was rebuilt in 1693 after an earthquake destroyed it. Part of the village is frozen in 1693, as a kind of life-sized museum to show how an agricultural Sicilian village lived. It was our first stop, and, needless to say having been promised a food tour, we were all a little baffled (picture John’s poor students!).  You could just imagine the local elementary class excursions to learn about Sicilian history!

First we saw a typical peasant or farm worker’s dwelling. It was tiny and very humble. I did not take any pictures of it, as it was quite crowded once we all packed in. The entrance to the dwelling is the picture on the left under the tree. After that we looked in at a few “shops,” for example where the cobbler worked. We continued on the path in the lower left picture above to see the dwelling of what I thought of as mid level management–the overseer or manager of the farm, but not at all the owner. The kitchen in the above picture is from that dwelling.  The laurel tree is from outside their dwelling. 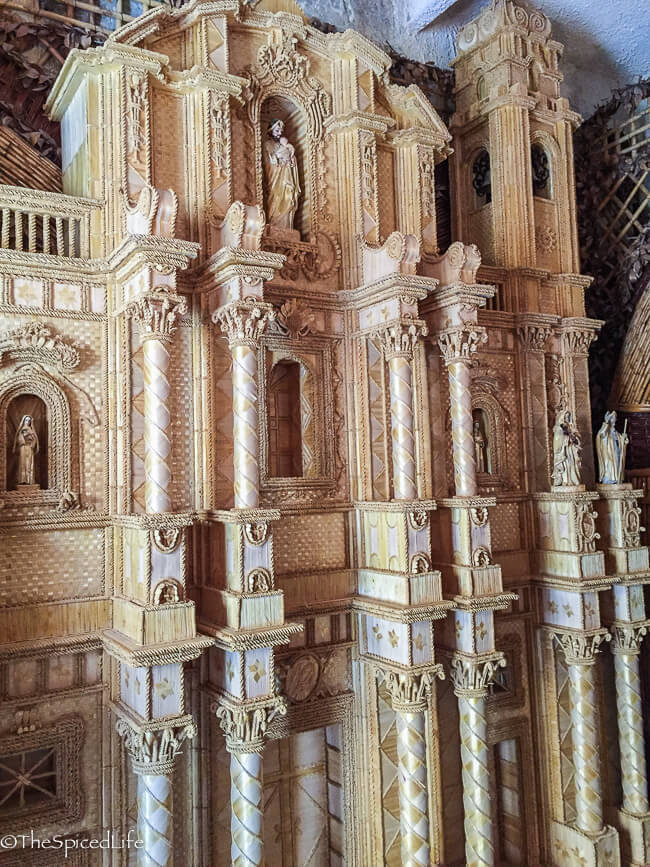 Hiking from dwelling to dwelling was hot, and watching videos on how the people lived was, well… not exactly un-interesting, but it certainly was not food! We were not really sure what all they wanted us to see. And that is why I no longer even remember what “building” we were in when they showed us all of the art made of agricultural “extras.” The theme of course was not wasting anything, and hence we have this amazing cathedral made of straw. Or the picture in the collage of flowers made of dried beans. The straw cathedral was the real stunner of course. 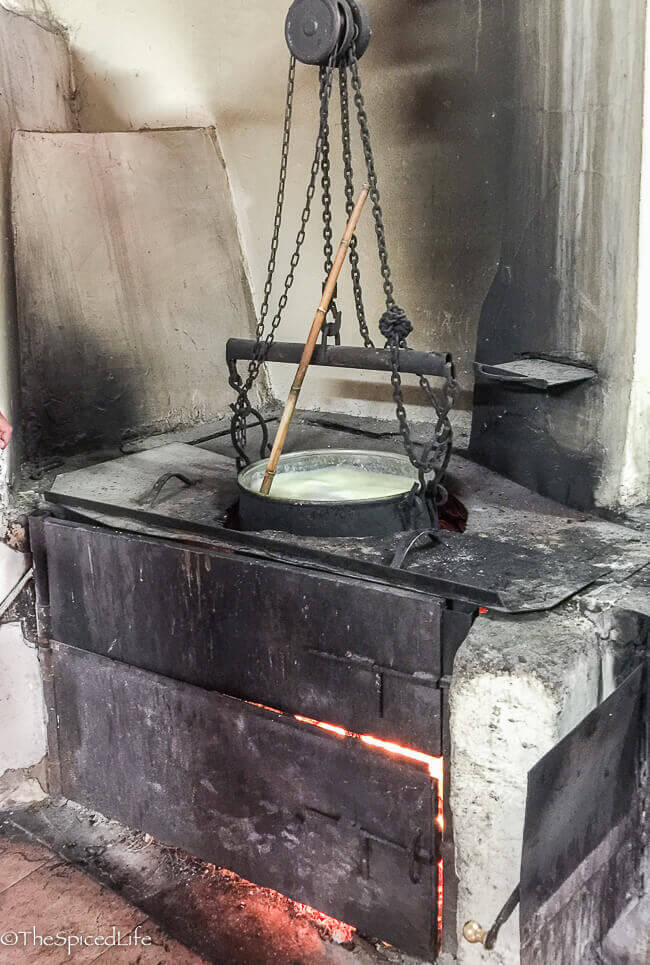 From the village we moved on to a farm in Ragusa where they made ricotta the traditional way. Needless to say I loved seeing that. They also had a gelateria with gelato made from the dairy their farm produced, as well as a restaurant where they served us some traditional Sicilian food. Finally!

The ricotta is made by heating cow’s milk with an equal amount (10 kilos to 10 kilos in the above picture) ricotta. The previous ricotta is drained for 45 minutes before being mixed with the milk. The fire is only fueled by olive wood. It is heated to 80 C, or 176 F. We got to try the ricotta, as well as several other cheeses they produced. As sublime as the ricotta is, without any salt it tasted foreign to us plain. I think it is fair to say we liked things made with ricotta more than the ricotta plain. 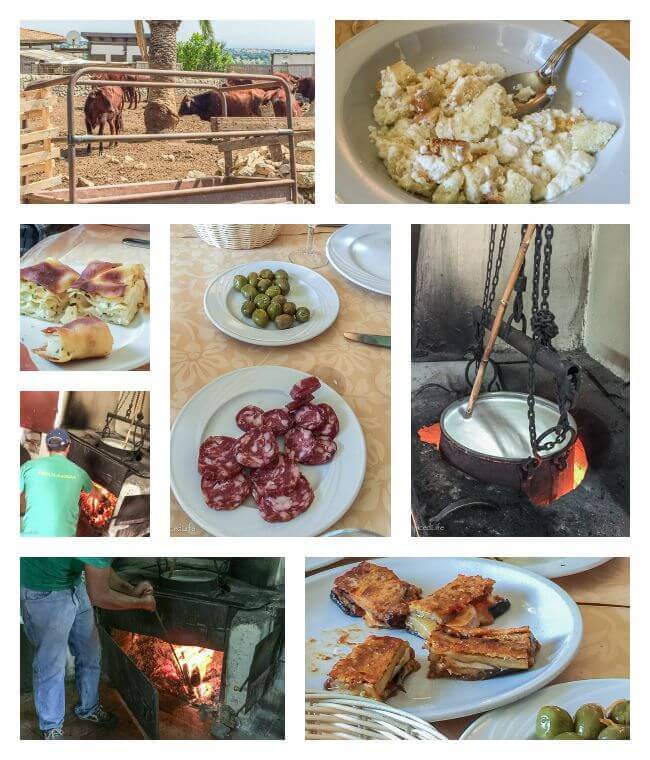 From there we moved to the restaurant. The most interesting dish to me–the one that really stands out in my memory and was very different from anything I have eaten anywhere and was also delightfully humble, i.e., it was clearly something that your average Sicilian farmer ate, was the very bland looking warm ricotta straight from the pot, mixed with crusty bread pictured on the top right in the collage above. When they first served it to us, it was just the warm ricotta. At that point you could see us all trying to get a taste for it, trying to be polite but not really sure what we thought. The ricotta at this point is not salted. The gentleman serving us showed me how to rip my bread into it and then I enjoyed it. John and the kids not so much–it was that kind of homey, bland comfort food that can be hard to get a taste for if you have not grown up with it.

We were also served green olives, salami, and some layered dishes. I was not smart enough to write down what the layered dishes were–now I am guessing some kind of lasagne and some kind of eggplant dish. After that, gelato. And a photograph session with the cows–I won’t lie, there might have been some grouchiness, on both Sammy’s part and John’s and mine, that there was no livestock to interact with. After that they took us to a beach–where we walked around for 30 minutes or so.

All in all, the tour was not as promised and I would not recommend it. Having said that, I cannot regret any of it, and it certainly was interesting.