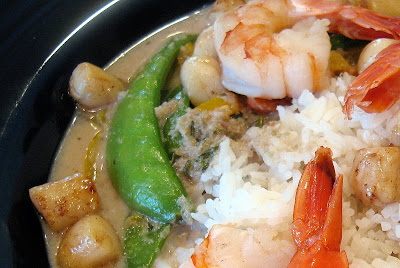 You have probably noticed a dearth of seafood on this blog. When I was growing up I hated all seafood except the fish fry we had down south on the Gulf coast–but you know anything tastes good breaded in cornmeal and deep fried. Similarly I discovered that I liked calamari as well. Then after getting out of college I discovered sushi–and I discovered that raw tuna tasted an awful lot like raw beef, which I love. So I love tuna–but it is pricey and I rarely make it at home. And that was about the extent of my seafood repertoire until a few months ago when I tried scallops. 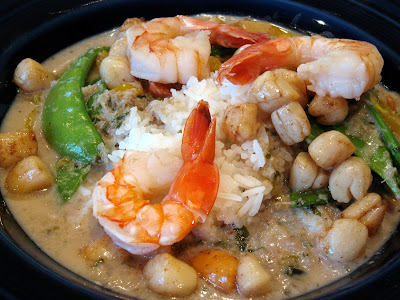 I may not like shrimp [update 2016: I learned to like shrimp!], but they sure are photogenic little creatures. Compare to the identical photo below. 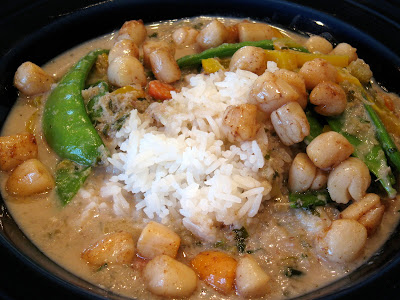 So when I came across this recipe for a Thai Green Curry Seafood “Chowder” I decided to try it, cooking the scallops and shrimp separately (and only eating scallops myself, I dislike shrimp but my husband and Alex LOVE it). I have to give a shout out to Becke of Columbus Foodie (whose blog as of 2018 seems to have disappeared), who had the exact same revelation about scallops. But did she sit at home wishing she knew anything about buying and cooking them? No she went out and did it, trying 3 different kinds, and blogging about her results, thereby doing most of my work for me. Now I had no excuse and simply had to try making them. 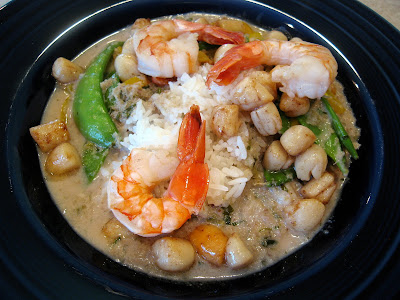 Needless to say (after reading Becke’s post) I chose the Dry Packed or Individually Frozen bay scallops. They were much smaller than I expected–maybe a sea scallop versus bay scallop thing? I guess I am not sure which I have eaten in restaurants. John thought they looked right but these things were TINY. Maybe it is like shrimp and just depends on the scallop. At any rate they definitely tasted right. I thawed them, patted them as dry as I could get them, and sauteed them in oil and butter. I then added water to that very hot pan and simmered the (already cooked but frozen) shrimp. I built the chowder by scooping rice into a bowl, ladling the curry broth around it, and then adding the seafood. Thus keeping the seafood taste at an acceptable level for someone like me! 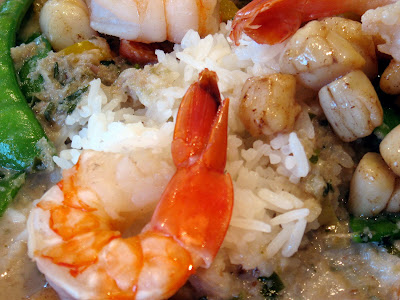 This dish lasted us 2 nights–so I cooked the seafood fresh each night.

A word about the “chowder.” Bon Appetit had this curry in its “New American Classics” section of their May 2009 issue. The idea being that American food is getting more global, etc. They simply called it green curry but declared it the new seafood chowder. Enough of it was different from how I have been taught to make a classic Thai Green Curry that I decided to re-name it, thus making clear its kind of fusion-y roots. This is not a traditional Thai green curry, although it certainly has a lot in common with it. 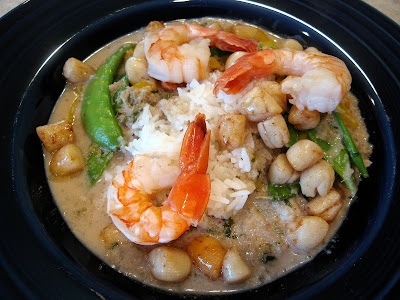 Heat oil in a large saucepan or dutch oven over medium heat. Add the garlic and saute until fragrant, about 15-30 seconds. Add the green onion and saute an addition minute, stirring to prevent scorching. Once the garlic had browned but not burned, add a large spoonful of the separated coconut cream. once it melted, add the green curry paste and stir together. Cook the paste until the oil separates–add more coconut cream if it seems too dry. It will become quite fragrant–maybe 3 minutes. Add the rest of the coconut cream and milk (the watery part), the water and the stock. Stir to blend. Add the kaffir lime leaves, palm sugar and fish sauce. Bring to a boil and then reduce heat to maintain a simmer. Cover and leave to cook for 10 minutes.

Add the carrots and bell pepper. Cover and let simmer another 5 minutes. Taste for seasoning (salty/sweet–add more fish sauce or sugar as desired). Add the snow pea pods. Simmer for 1 minute. Add the dark green parts of the green onions, the basil and cilantro and turn off the heat.

Serve with jasmine rice and scallops and shrimp. 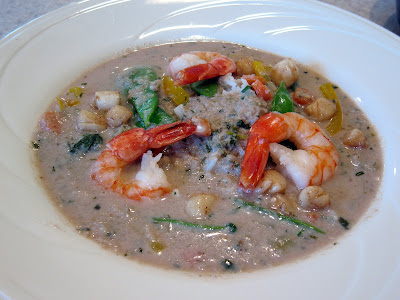 One of the first things I did when I started blogging was buy a plain white plate (so not me!). Anyway John asked why I take pictures of my dishes in the blue plate also, and I said because you never know (at least I don’t) which will suit the food. And then lo and behold I had the picture to prove it–the green curry looks pretty blah in the white plate.
« Why Have I Never Tried Lemon Sugar Cookies For Painting Before?
A Buckle Recycled: Lemon-Lime Strawberry Buckle »