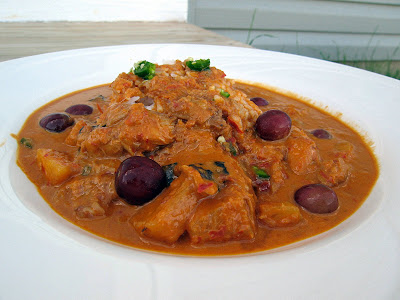 Really in an ideal world it would be roasted duck, but around here finding duck to roast would be a pain–and more of an undertaking than I felt like. So roasted dark chicken meat makes a pretty good sub.

I have previously shared some recipes for and using green curry paste–which is kind of ironic because red curry paste is my first love. But as I noted in those other posts, making curry paste is usually a big endeavor, where my husband and I together make several batches to freeze. So I don’t always get around to it that often. But I was cooking for a friend of mine who just had a baby and whose husband is out of the country–he studies monkeys and is chasing them, which is only relevant because they lived together in Thailand for quite a while so they could study the monkeys there–so I knew she liked Thai food and it seemed as good of an excuse as any to finally get around to making red curry paste. 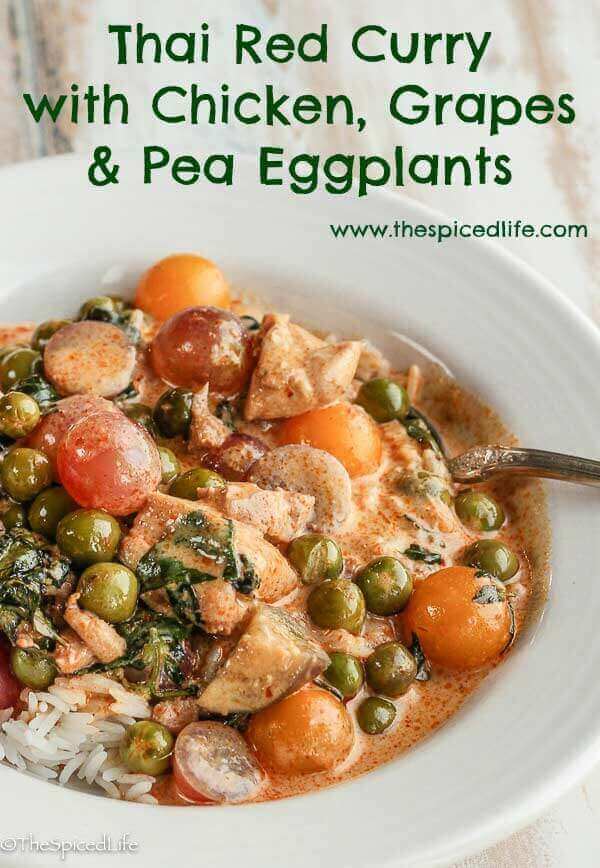 My favorite curry hands down is roasted duck with red curry as served in Thailand, where they serve it in pineapples with pineapple and red grapes in the curry. YUM. Some Americans cannot wrap their heads around the red grapes–until they try it. You better believe it was the first thing we added to our red curry when we got home from the honeymoon. [Update November 2015: I keep homemade red curry paste in my freezer, and fantastic curries are always just a few minutes away because of this. The above curry is a slightly different take on red curry, cooking chicken thighs in the curry instead of roasting it separately, adding grape tomatoes and pea eggplants, which are finally legally available in the States!]

I refer you back to my initial post on making Thai curry paste, here, but because red curries are based on dried chile peppers and not fresh, I do have a few other words of wisdom. First, red curries are probably the largest and most diverse group of Thai curries. Yellow and green tend to follow predictable paths, but there are plenty of curries–such as paneng and chu chee–that you might have seen on a menu as separate from red curry, but are in fact red curries. Because of this I think of them as more flexible, as permitting more tinkering. If you like dried spices, add them. If you do not, most can be omitted, with the exception possibly of coriander seeds. The Thai of course would have opinions about what goes with what (according to David Thompson, spices like those I have incorporated go well with the oilier roasted duck, and any Thai author will tell you that chu chee is usually for seafood, even though I have enjoyed it on chicken), but I recommend you try any meat or veggie that sounds good to you. 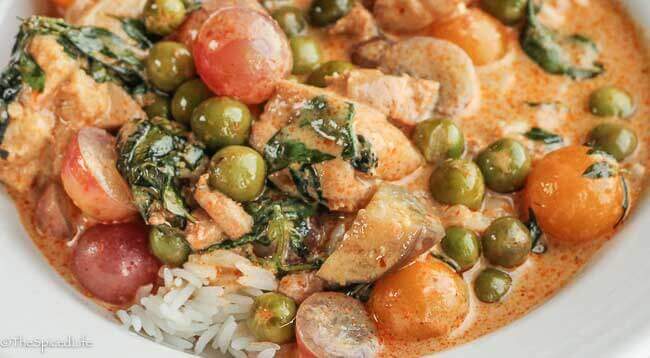 In my humble opinion, speaking as a non-Asian midwestern American who has been making Thai curries for over 15 years now (yikes!) the single greatest discovery that I have made is how to choose my chile peppers more carefully for dried chile pepper-based curry pastes. Many cookbooks recommend an absurd quantity of chile de arbol or a comparable dried chile pepper–which of course then leads to only a select number of your acquaintance being able to eat the stuff–and that is if you can even eat it! Let’s face it, when you were not raised with serious heat it can be hard to acquire the ability to tolerate it. I am a strictly medium sort of gal. (Which is, as I noted in my posts on green curry, what makes the canned curry pastes ultimately pretty useless to most of us). 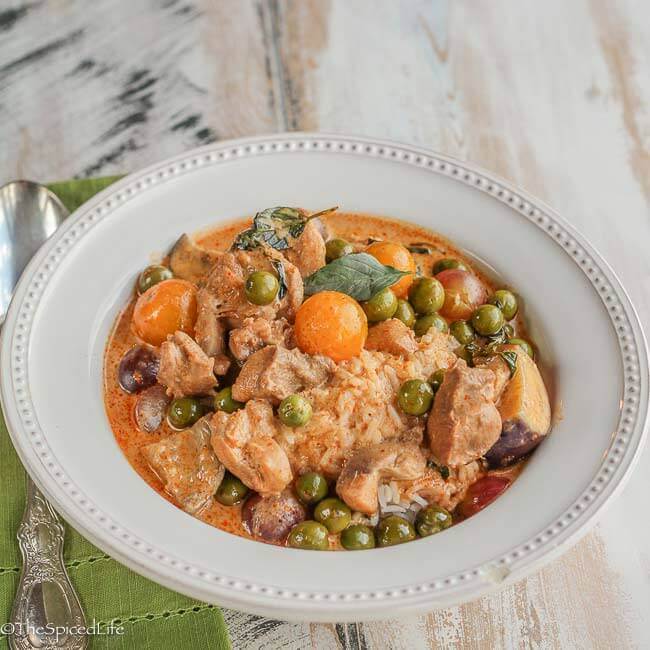 Anyway, then I received Victor Sodsook’s True Thai. He suggested dried New Mexico chile peppers, with some chile de arbol thrown in. What a difference! When I made paneng paste in Chiang Mai on my honeymoon, pounding out by hand yegads!, I assumed that their chilies were similar to ours, where size frequently denotes spiciness or lack thereof. Not so. My paneng, while very tasty, was also inedible. My husband finished it. But here in the New World, New Mexico, Anaheim or California chile peppers all dry to a very mild heat that packs loads of flavor. It is perfect for red curry paste. Do make sure you use a brighter (not sure how else to describe it) dried chile pepper, as opposed to the smoky darker ones such as guajillo, ancho or pasilla, all of which will taste very wrong. And certainly do not use any smoked peppers, such as chipotle. 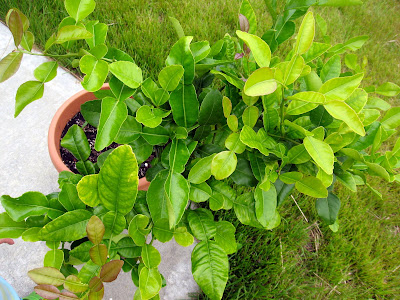 If you love Thai food like me, why not try a Makrut lime tree? You might get fruit, and even if not the leaves are the most important part. My tree loves my new house as you can see! It comes inside October/November through April/May, and all of my Thai food tastes perfect because I have the leaves!

In the past I have stressed the importance of using Makrut lime peel in your curry pastes–however there has been a reduction in the world crop, leading to almost none here in the States [Happily as of November 2015 this is no longer true. Just depends on the year]. I spent an embarrassing but well worth it amount of money ordering 12 limes (I was notified when they had some available) and then carefully sectioning and freezing the peel. Temple of Thai is my most reliable source–but even they are out right now, although I recommend emailing them because it may be that the crop has rebounded and they are just not in season now. So if you cannot find the peel, I recommend half the amount of Persian lime peel (or regular limes) with 2 Makrut lime leaves shredded and added to the paste. The Persian lime peel alone will not make an adequate sub–the flavor of Makrut lime is like no other.

I also recommend doubling, or even tripling this recipe and freezing it. Frozen homemade curry paste is a wonderful treat–and a very easy way to really impress people. However, if you do more than double the recipe, be aware you may need to puree the paste in batches and then thoroughly mix it all together. As always, I strongly advise you to pound the woodier ingredients in a mortar first (lemongrass, galangal, kaffir lime peel/leaves, cilantro root if using–some recipes call for it but I do not here).

[I am happy to report that in the years since this post was written I have discovered even easier and better ways to make homemade Thai curry paste. Check out my post on using a wet/dry grinder to make Thai curry pastes–and be aware that I think but have not confirmed that you could use a powerful blender like a VitaMix the same way!] 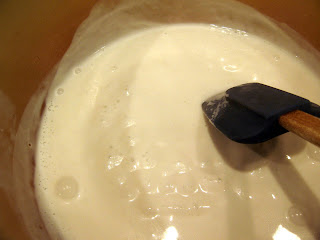 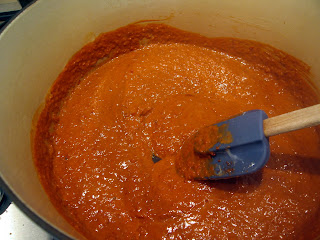 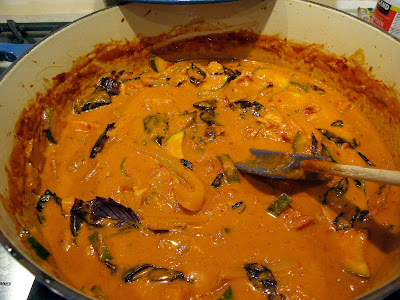 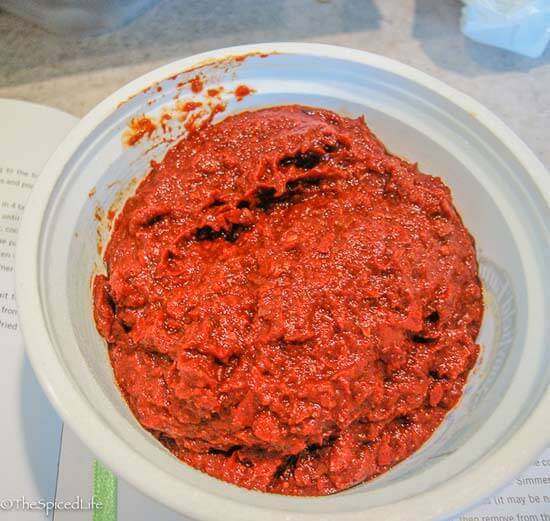