You are here: Home / beef / Super Simple Steak Salad and An Umami Tasting 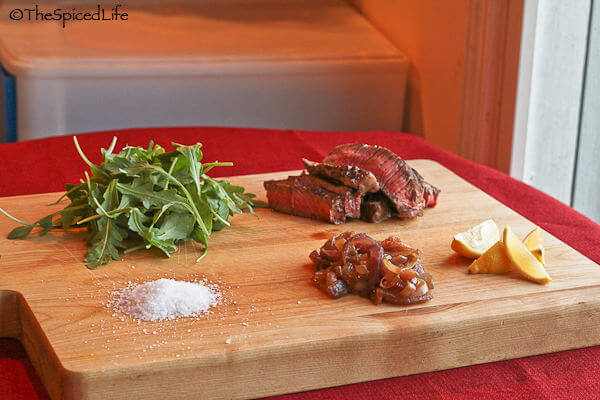 So I mentioned I was in Chicago. The Beef It’s What’s For Dinner people (the beef checkoff) invited some bloggers to Chicago for Live Well 2013, a workshop centered around cooking, parenting and nutrition, and where beef can fit into all 3 in 2013. It was a both fabulous and fascinating experience. Fabulous because they wined and dined us, and did it well, not to mention the fun of getting together with a small group of other bloggers to yak about blogging for 24 hours straight. It was fascinating in several ways.

First, the more negative way. I admit it, I have negative preconceptions about what I will call conventionally raised beef; I tend to prefer local farmers raising cattle completely on pasture. One of the speakers, Anne Burkholder of Feed Yard Foodie, came with her daughter and delivered a presentation on what was involved in running a feedlot cattle farm. She made it clear she is very offended by the term “Factory Farm” and here I won’t lie (I clearly did not say so to her face as I was not trying to be offensive) but that is exactly the term I was raised with, long before it was a Left leaning PC way to refer to conventionally raised cattle. On the one hand, I could understand her anger. Looking at her pictures it was clear to me that her cattle have much more room to move than I had ever envisioned; listening to her describe their diet it was also clear they get more “greens” than your average organic buying, Michael Pollan reading consumer understands (they get both alfalfa and corn stalks ground up with their grain). It was clear that she and her daughter care deeply about the cattle that pass through their farm. On the other hand, I am the granddaughter of a small cattle farmer whose cattle were entirely pasture raised and who probably knew exactly which cow he was eating at any given time. At any given time the feedlot farm in Nebraska has 3,000 cattle on their farm. So I was genuinely left feeling fascinated and educated, but not necessarily persuaded, if that makes any sense. Also, and I am really not devoting enough time to this subject here, but one of my bigger problems with large feedlots is not how they treat the cows but rather the idea that we as a country need that much inexpensive beef. We can get a lot of nutrition out of a cow, especially for growing children, but that one cow also takes a lot out of the environment, which is why I try to keep our diet loosely flexitarian (this N.Y. Times article does a good job of describing the what of flexitarian if not totally, for me, the why, as it focuses on diet, not environment). You will see beef recipes at The Spiced Life, because I adore beef. But you will also always see a lot of vegetarian, poultry and seafood (and pork, but I include that with the beef). 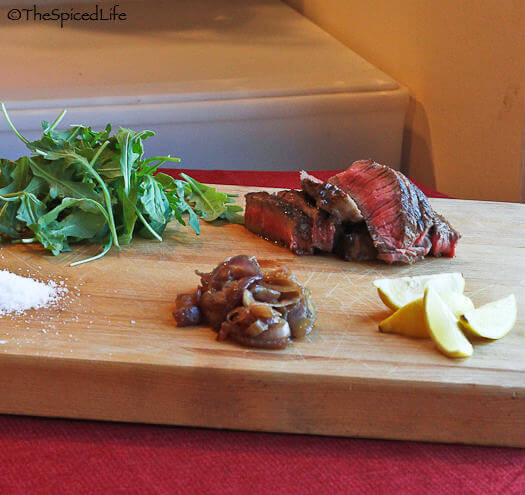 And now on to the more positive fascinating parts! Some of the topics covered that I found really interesting and informative: how to cut your large roast into smaller cuts and what they will be good for; the state of school lunches; the state of nutrition in general; an umami tasting, for lack of a better way to put it; and an outstanding trip to The Chopping Block, a cooking school in Chicago, where we were encouraged to create healthier, easier, more simplified versions of classic dishes using different cuts of meat. Stay tuned for more on that one later because honestly I am so inspired by being forced to think outside the box that way (not that my partners could tell probably since I was half awake!) that I am hoping to recreate our recreation into yet a third dish for this blog. But what I really want to talk about now is the umami tasting.

After a yummy, protein rich breakfast Saturday morning, we headed to the hotel restaurant for a discussion on umami, or the fifth taste. I think of it as the essence of savory. Some foods that have it in spades are mushrooms, dried beans, cheese (which also is salty) and, of course, beef. As part of getting us to think about umami and how it interacts with the other 4, more well known, tastes, a chef who works with the National Cattlemen’s Beef Association, Dave Zino, laid out this tasting for us. First we tried each “taste” on its own: salt for salty; lemon for sour; arugula for bitter; caramelized onions for sweet; and of course unseasoned beef for plain umami. Then he encouraged us to try each of the 4 the more well known tastes with beef, each on its own. Thus we “saw” (tasted!) how salty affects umami, how sour affects umami, and so on. Those of us inclined then tried all of it together, and I have to tell you I found it flat out delicious. And fascinating to think about.

That night, driving back to Ohio, I told Alex about it on the phone. And she was fascinated! And thus a plan was formed. And guys this story is going to crack you up, because this is what I learned, and parents sit up and take notice! Alex thinks she hates onions (really I think she hates their texture); Sammy hates steak. Well Sammy and I discussed it, and she decided she was amenable to trying it if it was not pink or red (Mommy shuddered and Grandpa cheered from his grave!) for the sake of the experiment. Alex liked the idea of the tasting enough that she agreed to try the onions. John was not home, but we did it anyway. The kids found it really interesting. Sammy liked the onions best and Alex liked the steak best (just like her mommy, darn near raw!). This was all predictable. They both agreed that combining the various flavors definitely changed how the flavors tasted, and made the things they did not care for much less disagreeable. They both agreed salt was necessary on almost everything. We had a great time.

Fast forward to the next night, tonight, when we did it again with leftovers. I will be darned if their father did not nearly throw a temper tantrum about tasting the lemon on its own! Here I had these super cooperative kids putting their dad to shame (and John is normally a joy to cook for). Of course after the kids and I dissolved into giggles calling him a big baby he pretty much had to try it. Mind you he was quite melodramatic about his distaste for it! He agreed that the whole combination was super yummy, but apparently I should never ask him to taste lemon again. Maybe next time we will see what happens if I suggest a lime!

This is not a recipe, because the ingredients are all kept separate until the end when you can toss them into a really fantastic simple salad, no oil even needed. Simply Recipes has a great recipe for caramelizing onions if you have never done it, just remember to not add any vinegar or salt, because you want them only sweet. Likewise, and it goes against your cooking instincts, do not season the steak as you want it to only taste of umami. Medium rare is probably ideal for the tasting, but obviously if it is not steak you will enjoy eating there is no point, so cook it to your desired doneness no matter how much it pains me (and yes it pained me to cook that steak for Sammy!). Let me know how it goes! 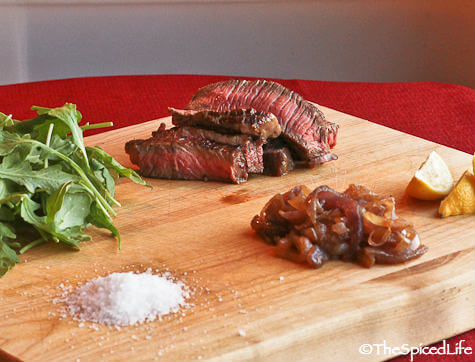