You are here: Home / beans / Southwestern Black Bean Soup: It Isn’t Super Healthy, But It Sure Is Tasty! 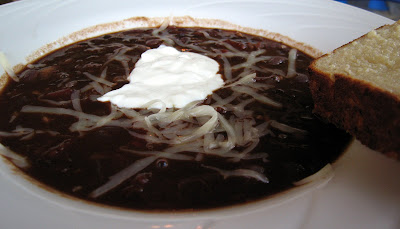 The first time I tried Dave Lieberman’s Black Bean Soup, I was full of trepidation. There is just something about using canned beans with their liquid that really icks me out. But I forged ahead anyway–I don’t remember why now–and was floored. It was really, really good–but of course it was with all that bacon!

For this time around, I had no interest in lightening the recipe (I love bacon and it really makes this soup), but I did want to get away from the canned beans. So, although I used Liberman’s recipe for everything else, I made the beans myself, as directed below. It was wonderful. If I had had time to go shopping, I would have piled it high with tortilla strips, chopped chives or green onions, cilantro, sour cream and cheese. As it is it was plenty good with just the sour cream and Monterey Jack cheese I had already in the fridge. 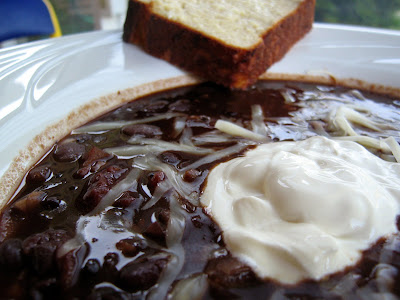 This soup is my submission to Sticky, Gooey, Creamy, Chewy‘s Blogiversary Bash. I think soups with garnishes make excellent party food–just set out the big pot’o’soup and then provide lots of accompaniments (lots more than I provided for my own family, frankly). It scores extra points for being both easy (who wants to work so much as a hostess?), it can be made-ahead, AND it is decadent with all of that bacon.

One exciting additional note about the soup: I made it with my mom’s homegrown dried black beans. Yes you read that right. Who knew you could grow black beans in central Ohio? It’s been such a success she promises she is growing more next year. I want her to start growing some of the funkier heirloom beans! And boy these cooked fast thanks to being so fresh! 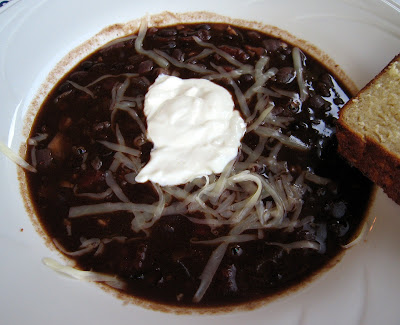 1 lb (I used 12 oz because that was all my mom gave me) dried black beans
1 bottle lager
1 small onion, chopped
3-4 cloves garlic, minced
1-2 T-sized chunk of freshly rendered roasty lard (not that processed white junk they sell in a box)
water to cover beans by at least 2 inches
salt to taste

Place all of the ingredients EXCEPT THE SALT in a medium large heavy pot. Bring to a boil and let boil gently for 5 minutes. Reduce the heat to low and cover, with the lid slightly askew. Check after 15 minutes to make sure it is very gently simmering. Check after 2 hours to make sure the beans are still covered by water (add some more if not). If it looks like they could be close to done, taste them to find out. Check every 30-60 minutes (for fresher beans, check more often) thereafter for the same issues (water and doneness). When they are tender and creamy, add salt to taste* and let them simmer another 10 minutes. Set aside to add to the soup.

*Be aware of the rest of your ingredients in the soup when salting the beans. For example, if you are using a commercial stock, I would under-salt the beans, in case the stock brings enough salt. If you are using homemade, salt as you would normally.