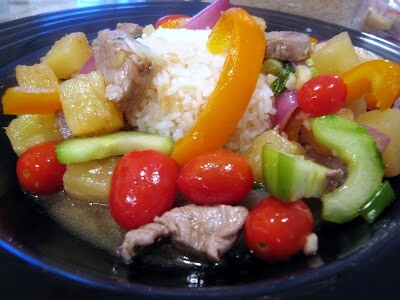 Do you associate sweet and sour Asian dishes with heavy, almost gloppy stir fries served with breaded and fried, sometimes greasy, chicken or pork? I am not claiming I did not once enjoy that Chinese American restaurant staple, but I promise once you try the Thai version you won’t look back. The sauce should be sweet, yes, but light and refreshing. The meat, in my opinion, should never be breaded or deep-fried. The vegetables should be fresh and crisp. I will accept a pink sauce, indicating the presence of some ketchup, but I like to keep the ketchup to a minimum. 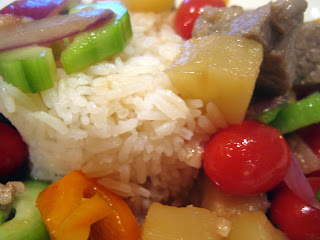 Like many SE Asian stir fries, this dish is simple to prepare, as long as you have everything ready to go before you start stir frying. The second important rule of thumb is that you must carefully choose the order in which you stir fry your vegetables. Some require longer cooking and come require only the barest heat through. What vegetables you use is up to you. For my own taste I consider pineapple to be non-negotiable (and I think canned subs fine). I also love the unexpected crunch of cucumber and explosive burst of grape or cherry tomatoes. I sometimes add broccoli but did not tonight. While certain rules are obvious, don’t let anyone’s “rules” dictate how cooked you want your veggies. For example, a Thai cook would add the onions late, but I always add them early because I do not believe home stoves get hot enough to cook the onions enough and raw onions bug my stomach. 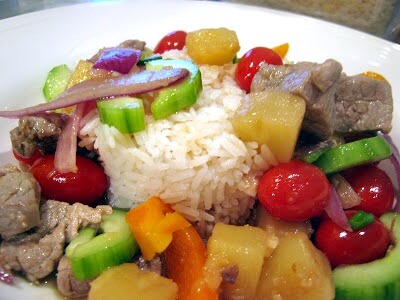 I have been making and eating this dish for a while now. I made it at a cooking class in Chiang Mai on my honeymoon, which is in northern Thailand. If you make it with only vegetables, it makes a delightful side dish for a more elaborate Thai spread, but I like using some meat and making it a light, simple dinner. It is not usually served spicy, although you could certainly add heat if you wished. 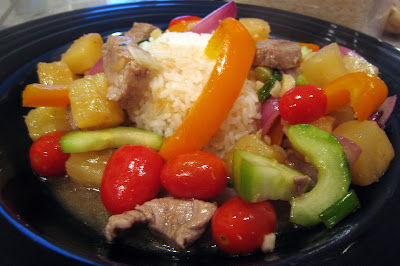 2 T vegetable oil
1 pork tenderloin, cut into bite sized pieces
6-8 cloves garlic, minced
1 small onion, cut into wedges
3 scallions, chopped into 1/4 inch pieces (the Thai would uses longer pieces but once again that is too much onion for my stomach)
1 sweet bell pepper, sliced
1 small pineapple, cut into chunks, or equivalent canned
1-2 handfuls grape or cherry tomatoes, sliced in half or left whole, your preference
1 hothouse cucumber, peeled and seeded, sliced into half moon wedges 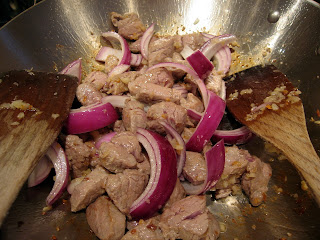 First prep all of the meat and veggies and make the sauce. the sauce will be a little on the sweet sauce, balanced by sour and salty. If you are unsure, feel free to add a bit more of something (lime juice for sour, fish sauce for salty, and sugar for sweet) at the very end. 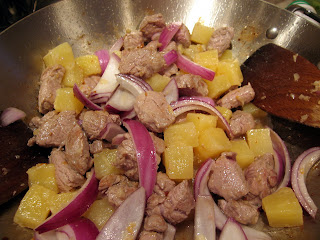 Heat a wok or large skillet on high heat. Pour in the oil and allow it to heat to nearly smoking. Add the garlic and stir fry for about one minute. be sure to keep stirring the garlic–it will become pleasantly aromatic and toasty golden but you do not want it to char. Add the pork and stir fry for 1-3 minutes, until it is no longer pink. From here on out, add and briefly stir fry the ingredients in the order that suits your palette. For example, I like my onions cooked but my bell peppers very crisp. So I add the onion, then the pineapple, then the green onion and pepper, then the sauce, and then last the cucumbers and tomatoes, which I only want to briefly heat through. I would stir fry 30-90 seconds between each ingredient, depending on how long you want it to cook (for example, if you use carrots they may take longer than the peppers). 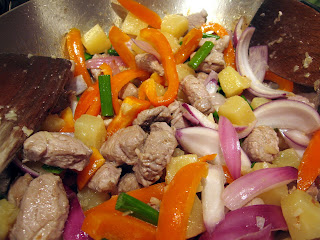 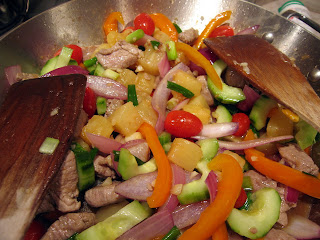