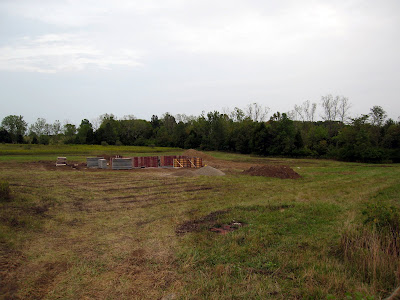 Check it out! We own a hole! At first Alex could not wrap her brain around this one, but now she has really gotten into it. She told us tonight it was HER basement they were building. HER toys would go down there (which granted is what I had told her). She also told us repeatedly that “Building a house is very exciting!” and she was “so excited that we would have our first HOUSE!” (all said in increasing pitch and volume–and not really true, it will be our second house). 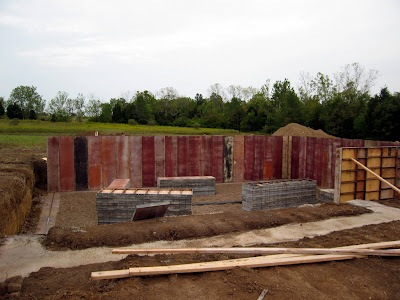 That being said, it is very exciting. The house will be roomy but not huge, but it actually looks quite small–until you picture a couch in it and realize just how many couches you could stuff in it. It’s unbelievable how fast it happens once it starts happening. But now I have started fretting that even if it is ready before Christmas we won’t move until after Christmas since I don’t know what to do about the Christmas tree and our kids’ excitement, which should be at an absolute high now with Alex since she can remember last year and what Santa brought her and Sammy (a kitchen of course). It just seems a shame to either get a tree at the last minute or not have the tree for Christmas Eve/morning–or to have to decorate the tree twice, argh! But as John says, I am borrowing trouble… 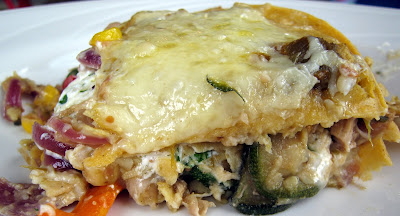 I hope I got the measurements on this dish right. I have been waiting almost a full year to make it–at which point I decided the key was staying true to the spirit of the dish–using apples in a Mexican tortilla casserole, rather than worrying about when I was going to remember to cook shredded pork in advance of making the casserole. So on a whim today I went for it–but I changed a lot, based on what was around and what was seasonal, and did not measure much since I was working with a 9X13 dish whereas Barbara, of Tigers & Strawberries, was working with a 9X9 dish. It came out wonderfully–and as long as you follow your instincts (if it seems like too much or not enough cheese, please adjust accordingly!) then I am certain yours will too! 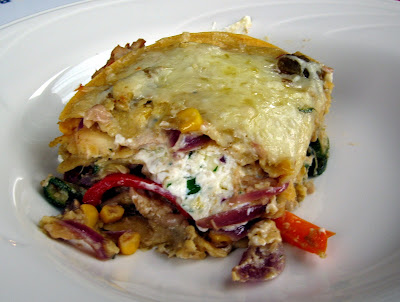 1 apple, chopped fine
4 cups salsa verde of choice (here‘s one I made recently but feel free to use your favorite storebought)

Using the food processor or your hands, mix all of the ingredients for the cheese filling until well combined. Set aside.

Finely chop one apple and add it to the salsa. Set aside.

Heat a large skillet on medium high heat and add the olive oil. When it simmers, add the onions and cook until softened and translucent. Add the garlic and zucchini, along with a pinch of salt. Stir and cook another 5 minutes. Add the shredded chicken and the bell pepper, along with the spices, and cook over medium heat. Add the corn, beans and apples and cook until the onions have caramelized a bit. Deglaze the pan as needed with the apple cider.

Bake in the preheat oven for 25-20 minutes, until the casserole is bubbling and the cheese are starting to brown. Let stand for 5 minutes before slicing in order to help it not fall apart.