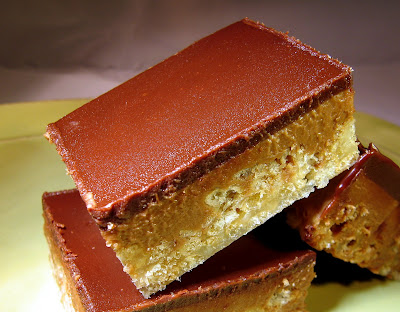 But she did warn us when she posted about them. As I mentioned earlier we have a house guest coming in, so I made these in anticipation of that. Maybe it is my inner Italian mother, I don’t know, but the idea of people coming to my home and me not having food just wigs me out. So despite the peppermint patty brownies I finally got right this week (I was inspired by my sister to try again) and served during the playdate and the allspice muffins for playgroup and the chocolate chip cookies, lemon meltaways and Espresso Chocolate Chip Shortbread I baked for our soldier for Operation Baking Gals on Tuesday (that last I want to make again before blogging about them–mine came out a bit dry sadly enough), I found myself in the kitchen again tonight, up to my arms in butter and sugar (but no flour this time). I’ve probably gained 10 lbs this week just from sampling. 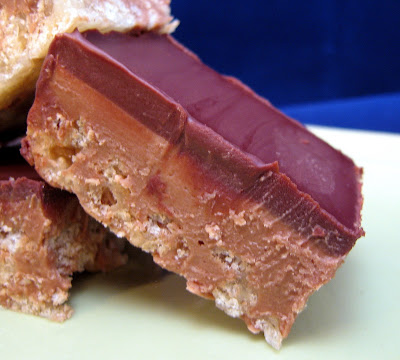 It is hard to say that these bars were the best thing I made this week given how I feel about that NY Times chocolate chip cookie recipe, but they were definitely the second best thing. Ironically, when I saw them on Deb’s blog I thought they were gorgeous but I was not sure how I felt about Rice Krispies and peanut butter and chocolate.

It turns out I feel mighty fine about that combo. 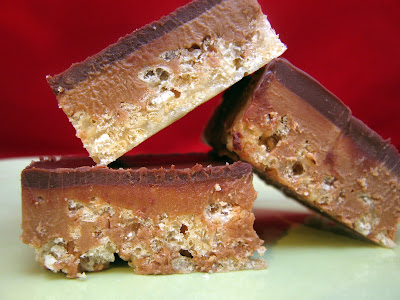 So, like Deb, don’t say I did not warn you how sinfully addictive these things are, but also don’t say I didn’t tell you that yes you absolutely should try them. 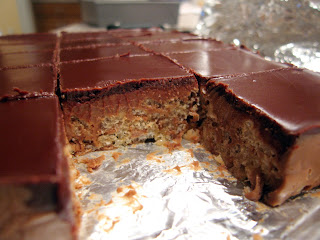 My main changes–both from the original and from Deb–were to add salt (although Deb used salted butter so clearly we were on the same wavelength) and also to line the pan with foil and slice the bars before they completely hardened. Some people had complained about crumbling and I hoped this would fix that. Whether it was the reason or not, my bars sliced beautifully. 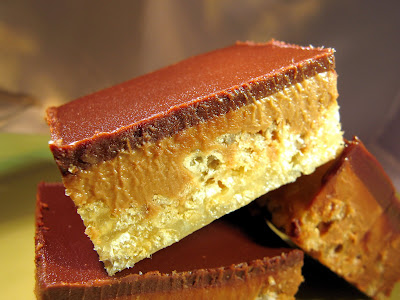 Line an 8 inch square baking pan with foil; make sure that the foil overhangs on at least 2 opposing sides and is pressed securely into all corners. Lightly spray a paper towel with nonstick cooking spray and use it to rub the bottom and sides of the foil lining.

Put the cereal in a large bowl and set aside.

Pour 1/4 cup water into a small saucepan. Gently add the sugar and corn syrup (do not let any sugar or syrup get on the sides of the pan) and use a small wooden spoon to stir the mixture until just combined. Put a candy thermometer in the saucepan. Cook over medium-high heat and bring to a boil; cook until the mixture reaches the soft ball stage, 235 degrees F.

Remove from the heat, stir in the butter and salt, and pour the mixture over the cereal. Working quickly, stir until the cereal is thoroughly coated, then pour it into the prepared pan. Using your hands, press the mixture into the bottom of the pan (do not press up the sides). Let the crust cool to room temperature while you make the next layer.

In a large nonreactive metal (I used glass) bowl, place the chocolate and the peanut butter. Set the bowl over a saucepan of simmering water and melt, stirring with a rubber spatula, until the mixture is smooth. Remove the bowl from the pan and stir for about 30 seconds to cool slightly. Pour the mixture over the cooled crust. Put the pan in the refrigerator for 1 hour, or until the top layer hardens.

While the bars are chilling, make the chocolate topping: In a large nonreactive metal bowl, combine the chocolate, corn syrup, salt and butter (I did the salt to taste–it was fabulous after 2 pinches; the original recipe does not call for any salt in any stage but I think it really adds something).

Set the bowl over a saucepan of simmering water and cook, stirring with a rubber spatula, until the mixture is completely smooth. Remove the bowl from the pan and stir for 30 seconds to cool slightly. Pour the mixture over the chilled milk chocolate peanut butter layer and roll it around until it evenly and smoothly coats the entire peanut butter layer. Put the pan into the refrigerator for 1 hour.

When the 1 hour is up, pull the pan out and let it sit for about 10 minutes. Then remove the sheet of bars by using the foil overhang. Slice the bars (handling gently–the tops will still probably be soft but it will be easier to slice at this point) and return them to the fridge to let the top harden completely. Then remove again and store however desired (I did 2 layers, separated by wax paper, in a tupperware container) in the fridge. 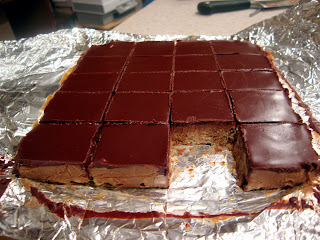