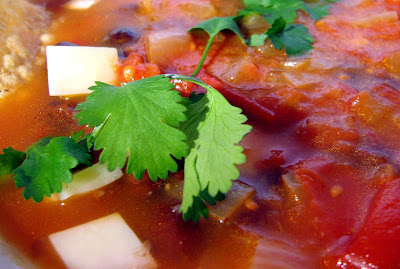 I have been holding out on you.

Really holding out. My most repeated recipes, the tried and true favorites, of this household, are, for the most part, not on this blog. This is easily explained; the recipes are usually easy fallbacks that I don’t even have a written recipe for anymore. And they are frequently made when I am frazzled and short on time anyway. So the idea of trying to type them up is daunting. I will try to be better about this.

One of these recipes–probably my most made and eaten recipe of the last decade–is extra special because it is what I crave when I am sick. And when I am sick I don’t feel like typing out recipes. 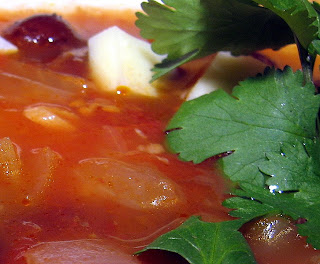 But you are all in luck–although the poor birthday boy is not–because it is John who is sick (and therefore not getting his SE Asian feast–we will see how he is feeling tomorrow morning; it seems to be a basic cold/virus, except he vomited all night but swears he is fine for dessert tonight and since he is a boy who knows he might be). So I feel well enough to cook, take pictures and type.

There are lots of tortilla soups out there–and a fair number of them are truly scrumptious. Most here in America tend to be a little on the thick side, usually thickened by corn tortillas, and full of goodness–cumin, chili powder, beans, chicken, pepper, onions, zucchini, etc, topped by cheese and sour cream. I have eaten and loved these soups a thousand times–and probably I have blogged about them. 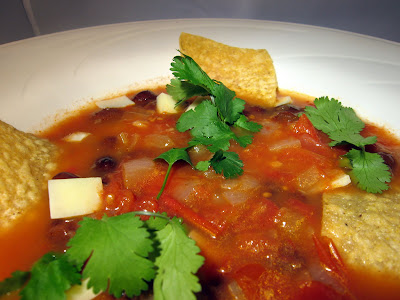 But this is different. This is a Oaxacan Tortilla Soup, taught to me by Susana Trilling in a Mexican cooking class (sadly in Cleveland, not one of the classes in Oaxaca, although that remains a dream of mine), and it is as different from those tortilla soups as a bed of seasonal greens tossed with fresh lemon juice and a good extra virgin olive oil is from a Chef”s Salad. Each have their place but just because you have a favorite tortilla soup, please don’t let that stop you from trying this one.

This tortilla soup is a simple but extremely flavorful broth, thickened by nothing except tomatoes. It is flavored by onions, garlic, tomatoes and chipotle. Nothing else goes into the broth–in the class even the chipotle did not, instead you chopped up canned chipotles in adobo for garnish, but over the years I have chosen to cook dried chipotles into the broth instead, to provide more overall chipotle flavor without as much heat from biting into an individual bite of pepper. The chipotle is essential to this soup. You then ladle the broth over the garnishes. I will list all of the possible garnishes in the recipe, but I will asterisk the ones that for me personally are non-negotiable. 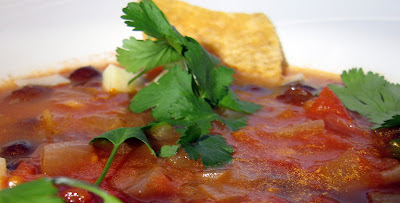 A few comments on quantities: think of me as that grandma you had who refused to measure anything and stubbornly answered “when it tastes right” to every question you had regarding amounts. I generally start with a few medium or one large onion, a head of garlic, maybe 28 oz of 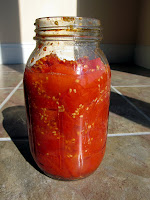 canned tomatoes or the equivalent fresh in the summer (this time I used my mom’s, canned last summer, and I can soooo tell the difference), and then add the stock til I get it right. Sometimes I add more tomatoes and then more stock again. Similarly with the chipotles: the number I need the first day is not the same as the second day (if you like leftovers). It WILL get spicier as it sits, so if it took 3-4 chipotles to get it right the first day, I suggest removing 1-2 of them before putting in the fridge. When tasting the broth for the right taste you should remember 2 things: you may need to add a fair amount of salt if using homecanned tomatoes or homemade chicken stock AND the broth should be a bit spicier than you like it, because the garnishes will calm it down.

By now you are thinking it might be way too large of a pot of soup, right? Well you are in luck because this soup freezes very well. There was a 3 year stretch in Pennsylvania when I was having babies that I just kept freezing the tomato-onion heavy leftovers and then later re-using by adding more broth and tomatoes and occasionally onions and garlic–when it would get too thick with tomatoes and onions I would just buzz it with the immersion blender. John preferred the broth really thin, I actually liked it after the blending, either way we cleaned our bowls. 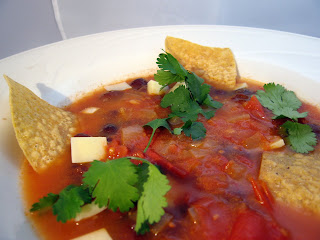 And one last comment on tortilla chips. You can make this with grocery store tortilla chips–I will not come after you, the tortilla soup police will not get you. But if you ever try it with homemade tortilla chips you will never, ever do such a foolish thing again. Now you are thinking to yourself Laura don’t tell us you actually make homemade tortilla chips when you said you make this soup when you are sick. You’re right I don’t, at least not when I am sick–I send John to the local Mexican restaurant and he brings home a few bags. I am not enough of a food scientist to tell you why, but the grocery store chips will turn to mush while the freshly made ones retain their crisp. 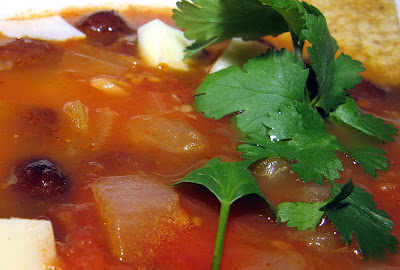 Oaxacan Tortilla Soup
Adapted from Seasons Of My Heart

Everything to taste–see notes above!

1-2 T vegetable oil, as needed
1 very large onion or equivalent, chopped
salt to taste–will depend on your tomatoes and stock
1 head of garlic, minced
28 oz canned tomatoes or equivalent
48 oz chicken stock, or to taste (I suggest starting with less and adding and tasting)
1-4 dried chipotle chile peppers or canned in adobo (the canned ones will be hotter right away; the dried heat can be monitored and built slowly)

Garnishes:
diced avocado
cilantro
*diced cheese (Oaxacan string cheese, farmer’s cheese and monterey jack are all good choices; it should be a good melting cheese)
shredded chicken
beans of choice–I usually prefer a red or pink bean here but black might be more traditional in Oaxaca; I used Eye of the Goat this time
*tortilla chips, preferably freshly made
anything else that sounds good to you 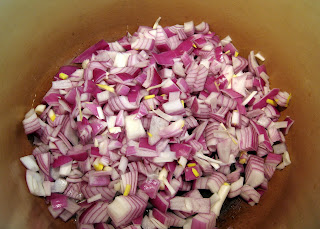 Heat a large dutch oven or stock pot; add the vegetable oil and heat it to shimmering. Add the onions and sprinkle some salt over them. Cook until softened and add the garlic. If you are using homemade stock, sprinkle some more salt on it. Cook for about 10 minutes total. Add the tomatoes and cook for 10 minutes, boiling briskly and stirring occasionally. While the tomatoes are cooking, add the chipotles. After the 10 minutes is up, add the stock. Let the soup simmer for at least an hour if possible to meld flavors, but I have done it shorter in a pinch. This soup always tastes better the next day. Taste for salt and tomato/broth amount adjustments at the end. 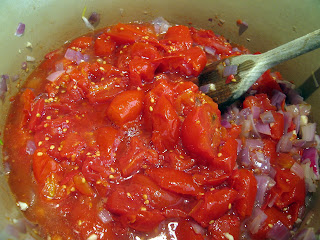 Serve, ladled into bowls, over the various garnishes (except cilantro and tortilla chips, which should go on top). 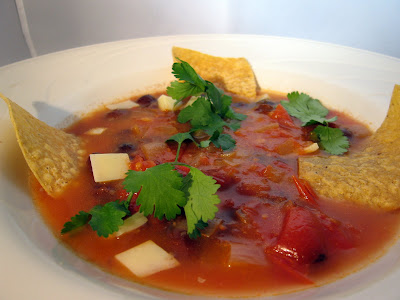