You are here: Home / brownies / My House Smells Like Christmas: Alice Medrich’s Best Cocoa Brownies With A Peppermint Twist 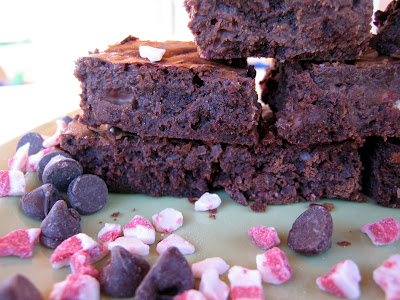 OK, I have several posts burbling around inside of me, so provided I get them typed, I think you should hear from me a little more often this week.

These brownies were inspired by a thread on the Cooking Light Bulletin Board. Someone posted a question about doubling this recipe, and then somehow the thread turned to mint variations. Now I usually avoid those variations; most brownie combos are just too over the top for me. The Oreo ones drive me nuts–I usually just end up wishing that I could eat the Oreos plain. The mint ones are frequently too strong. And so forth and so on. I tend to be a brownie purist. 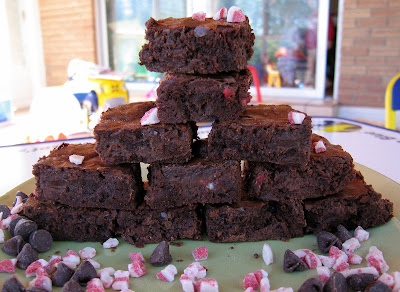 But for some reason the mint variaton suddenly sounded good to me. All I had were some Andes Peppermint Crunch Baking Chips, so I decided to try using them. I remembered that in the in the past Andes mint baking chips have been very strong–unlike, say, with chocolate chips, there is such a thing as too much of a good thing when it comes to mint baked goods. So I took the optional 2/3 cup chopped nuts, and instead added slightly under 1/3 cup of the baking chips–and slightly over 1/3 cup of semi sweet chocolate chips.

These are really good. They made my house smell like the holidays. The peppermint is present but not at all overwhelming. They are kind of like the brownie form of a London Mint. I bet they would be great crumbled into ice cream… 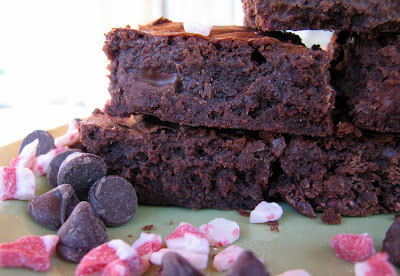 Position a rack in the lower third of the oven and preheat the oven to 325°F. Line the bottom and sides of an 8×8 baking pan with parchment paper, leaving an overhang on two opposite sides.

Combine the butter, sugar, cocoa, and salt in a medium heatproof bowl and set the bowl in a wide skillet of barely simmering water. Stir from time to time until the butter is melted and the mixture is smooth and hot enough that you want to remove your finger fairly quickly after dipping it in to test. Remove the bowl from the skillet and set aside briefly until the mixture is only warm, not hot.

Stir in the vanilla with a wooden spoon. Add the eggs one at a time, stirring vigorously after each one. When the batter looks thick, shiny, and well blended, add the flour and stir until you cannot see it any longer, then beat vigorously for 40 strokes with the wooden spoon or a rubber spatula. Stir in the baking chips and chocolate chips. Spread evenly in the lined pan.

Bake until a toothpick plunged into the center emerges slightly moist with batter, 20 to 25 minutes. Let cool completely on a rack.

Lift up the ends of the parchment or foil liner, and transfer the brownies to a cutting board. Cut into 16 or 25 squares. 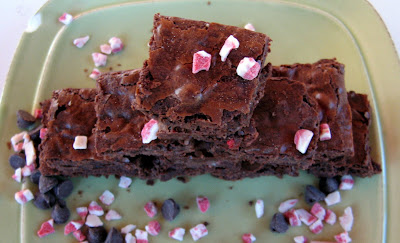