You are here: Home / chicken / My Delayed But Intense Love Affair With Tom Ka Gai

Tom Ka Gai (sometimes spelled Tom Kha Gai) is a delicious and fresh Thai coconut soup, flavored with galangal, cilantro and lime. I updated these photos in December 2016; they look a little different, because I let each person add their own nam prik pao, which means the photos were taken before it was added, unlike the original photos. Affiliate links are used to link to items I am discussing. 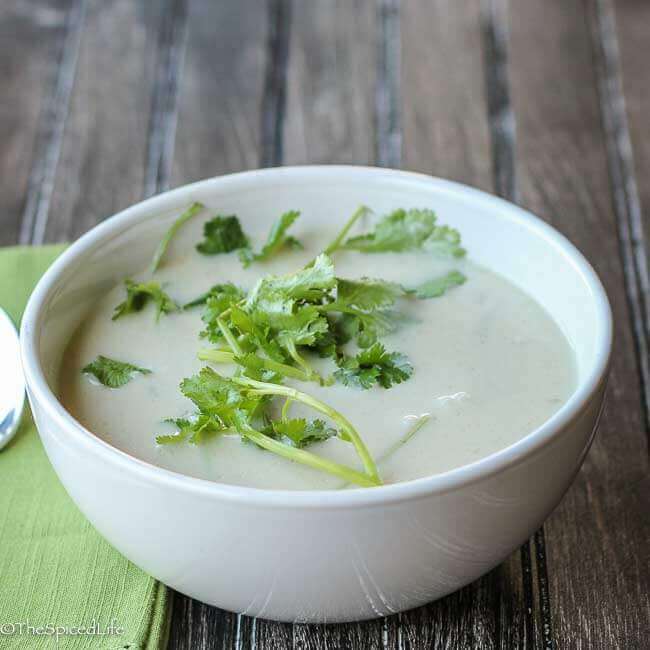 I love soup–just check out my sidebar and you can see how much. I also love Thai food–more than is really represented in my archives (because I learned to make it a few years ago, whereas this past year I have really been discovering Indian food).

Yet somehow I have never made tom ka gai (spellings vary; David Thompson spells it as dtom khaa gai in his classic Thai Food

, and others still spell it as tom kha gai; I tend to use both “kha” and “ka”). As a matter of fact, until about 2 months ago, I did not think I liked it at all; I found it watery and bland. But I guess I had only had mediocre examples because 2 months ago at a Thai restaurant in Atlanta I was served a complimentary lunch special tom ga kai that blew my socks off. I almost skipped eating it–how dumb am I?–but decided to try it and wow.

So I came home, determined to try making it myself. After all, even if I had no idea why it was so good, I know what I like and I know Thai food pretty well, so replicating it (or something that I liked at any rate) was bound to be simple. 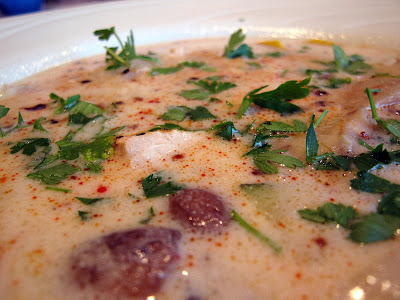 This soup was fabulous! What had I been thinking? Knowing how much I loved Thai food, why did I stop trying tom ka gai after 1 or 2 bad examples? Sheesh!

You know what the best thing is about this soup? It is the perfect one pot summer meal. It is lighter than most of my one pot meals (think stews, chilis, casseroles and braised meat dishes), but it was still filling enough on a summer evening with a fresh bed of greens sitting beside it. Given how much I love one pot meals, that alone made the discovery thrilling, since I frequently mope around the house on summery afternoons, complaining about how I don’t feel like making a meat main dish with 2 sides but yet am not in the mood for most of my one pot fallbacks. 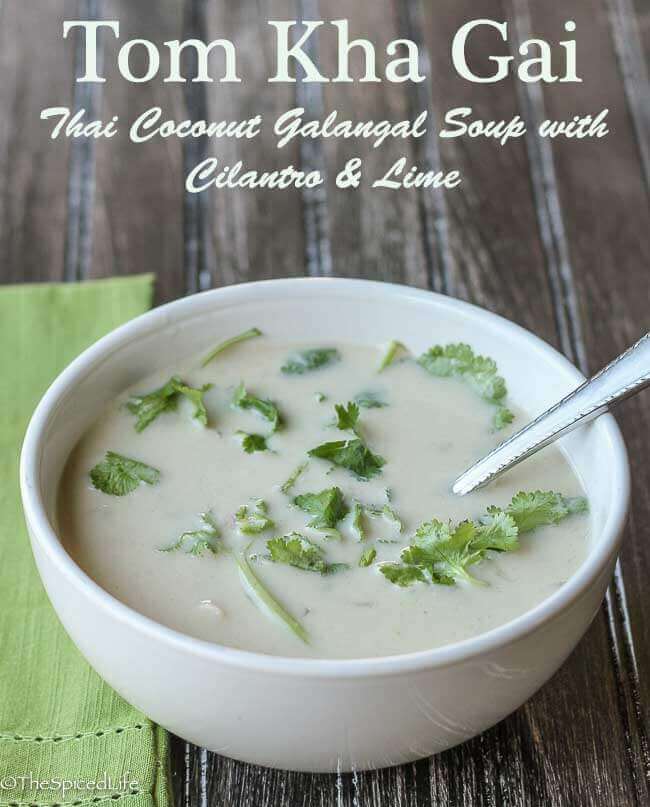 About my soup: I chose to work from a David Thompson recipe for one simple lazy reason: he did not call for the chili tamarind jam (nam phrik pao) I saw called for everywhere else but instead offered the option at the end of his soup chapter of a chili topping (nahm jim prik jiaw) that people liked for flavor and color both on Thai soups. I could not buy the nam phrik pao here in my small town and I did not feel like trying to make it. Thompson’s condiment looked much easier. So his recipe it was, albeit with changes. For example, he does not call for onion in his condiment, but I thought it sounded good. No disrespect to the original, but we loved it. It was deep fried goodness–and a teaspoon or 2 was enough for a dish.

[Update December 2016: since making this dish for the first time, I discovered storebought nam prik pao, and realized that it is quite delicious and having it on hand makes so many Thai dishes easier, such as this fried rice–check out that post if you would like to read any more about using commercially made nam prik pao.] 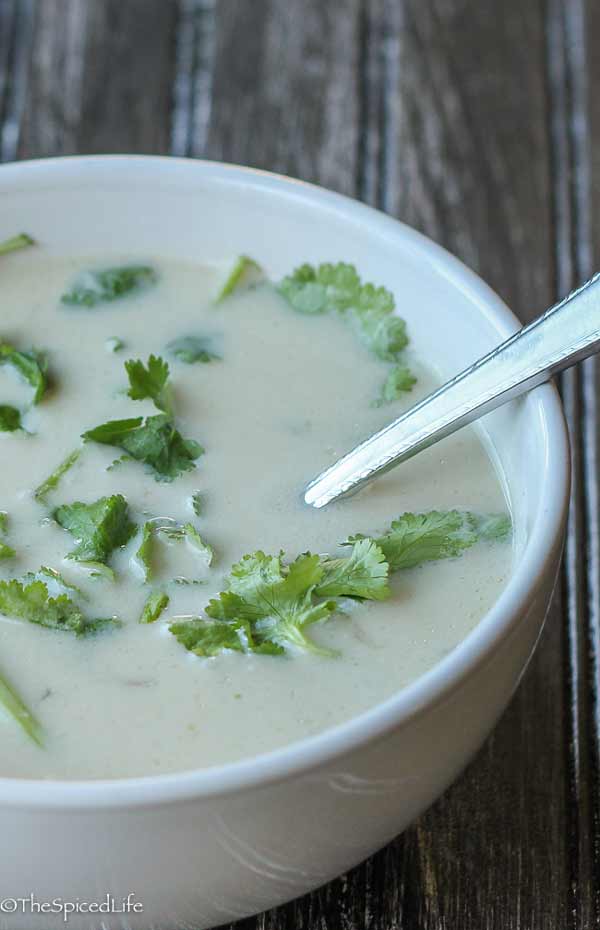 I also added summer squash to the soup, mostly because I think zucchini complements just about any Thai dish and it bulked the soup up with more veggies. I used more lime juice because I love sour. I flash fried (is that a phrase? I deep fried for bare moments) the mushrooms, once again because it sounded good, my deep fryer was heated and ready, and I dislike raw mushrooms and I was afraid just simmering them in the soup would leave them with a raw taste. [Update December 2016: I cooked bunapi mushrooms directly in the stock and they were delicious, so no flash frying necessary if you prefer not to.] Other recipes I had read for tom ka gai said that the creaminess was up to you, I was cooking for more than one night, so I ended up using 4 cups of stock to 33 oz of full fat canned coconut milk and 14 oz of light coconut milk. We liked it creamy, obviously.

, because the proportions were all off in mine. I was making a bigger soup and I did not measure well. I am confident his recipe is enough of a blueprint along with my changes in the preceding paragraph. I am giving you the recipe for the condiment as I made it–it should store in the fridge for a month or 2, longer in the freezer.

For what it’s worth, my kids went crazy for this. Sang its praises all night. 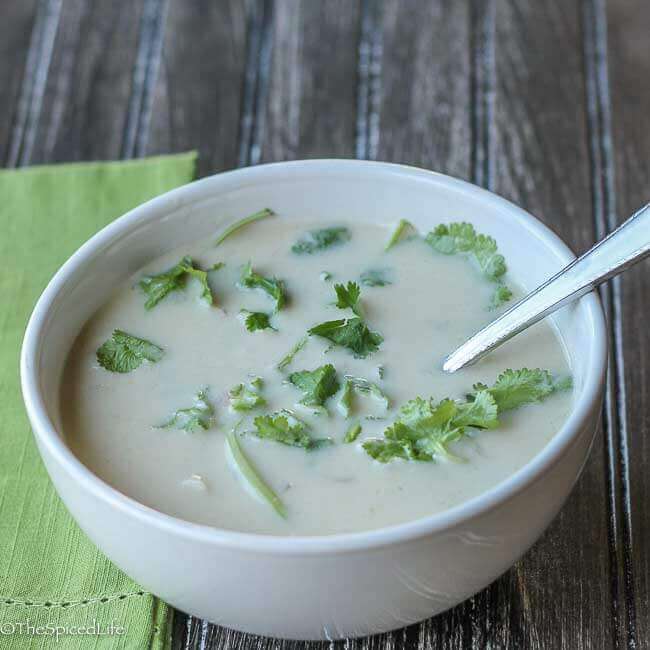 Print
Recipe closely adapted from David Thompson. If you are not in the mood for chicken, try adding shrimp and cooking it through at the last minute--it is fabulous!
Author: TheSpicedLife
Recipe type: Soup
Cuisine: Thai
Ingredients
Instructions
3.4.3177 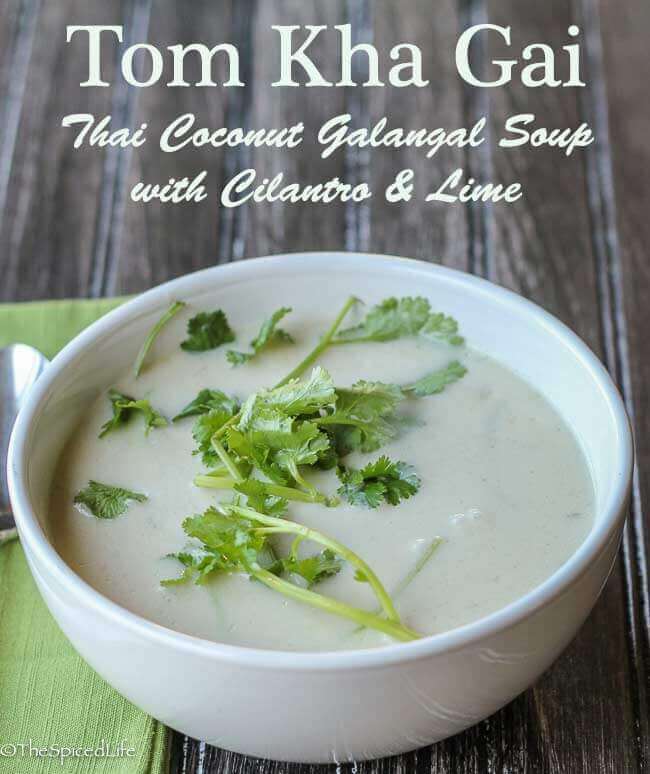