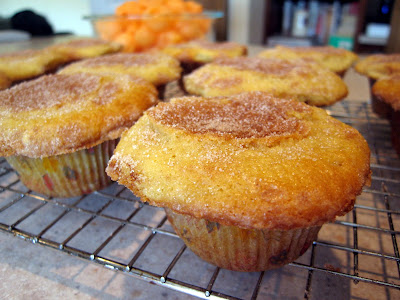 I offered to host playgroup today but when I only got a few responses late at night I decided not to bake (this happens in the summer a lot–people out of town, plus we have several newborns in the group). Then, late last night, I read Big Red Kitchen and knew that yes indeed I was baking. The Sour Cream Muffin Cakes she has up right now are absolutely perfect for casual daytime hosting–they came together super quickly and were so tasty that one of the moms took the very copy of the recipe I was working from! 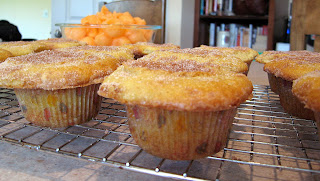 However, I did learn a lesson while making these cup cakes. Size matters. Robyn called for 1/3 cup of batter in each muffin for a total of 12-14 muffins depending on your way of measuring I guess. Well I did not feel like pulling out a second muffin tray for 2 muffins, so I just made 12 larger muffins when it became apparent my batter would make at least 14 at her size. And the incredibly tasty topping became incredibly ugly but tasty topping. So I guess the moral is keep the muffins to 1/3 cup batter or you risk the expansion of the muffin out from under the topping.

My changes were minimal–she did not mention salt, which I added. I used light sour cream. Last and least important, I added my ingredients in steps so my instructions seem fussier but really this recipe was super easy. 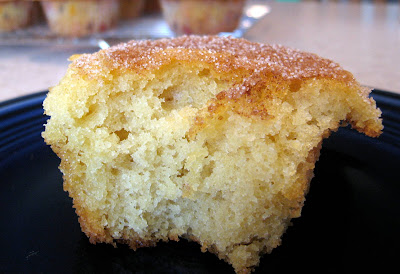 Cream butter and sugar together until light and fluffy. Add the eggs, one at a time, beating well after each addition. Add the vanilla and beat until well blended–be sure to scrape the sides if using a mixer.

Whisk together the flour, baking powder, baking soda and salt. Mixing gently, add the flour mixture to the batter in 3 additions, alternating with 2 additions of the sour cream, beginning and ending with the flour mixture. Line a muffin pan with muffin liners. Briefly spray the pan and muffin liners with nonstick spray. Scoop 1/3 cup of batter into each muffin liner. Sprinkle the tops with cinnamon sugar. Bake for 14-17 minutes, or until a toothpick inserted into the center of a muffin comes out clean. Mine took longer since I made them too big. Also because they came out too big, I sprinkled them with additional cinnamon sugar (the sides that had none) when they came out of the oven. Let the muffins cool for 5 minutes in the pan and then gently knock them out onto a cooling rack. Cool right side up.