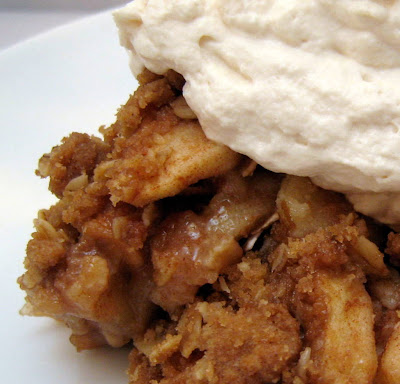 I am annoyed with myself every fall for not trying to make more simple apple desserts. I see them everywhere on the internet, mouth watering, and I think I could do that. And then for some reason I do not. OK, I do know why part of the time–frequently those otherwise simple desserts involve making pie or tart dough, something that I just have not done often enough to find “simple.” I guess the other part of the time I get lazy, or distracted, or probably I make something chocolate instead. That’s a common failing on my part! 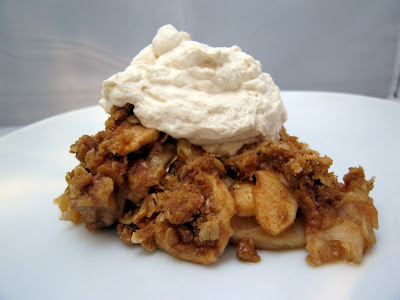 Today at the farmers’ market, I picked up Golden Delicious apples and some heirloom variety–have you ever noticed it is impossible to remember the names of heirloom fruits and veggies? Although they have wonderful names, they are also unfamiliar and as a result they slip right out of my head. But anyway, this particular variety was quite crisp and tart–perfect to my mind for baking. 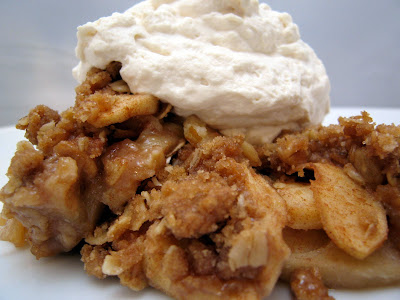 (Quick tangent: I was reading the other day that Southerners insist you only bake with tart apples and eat sweet, while Northerners feel the opposite. Well despite my strict allegiance to Northern cornbread, apparently I am a Southerner in this matter. In my family, tart apples are always for baking and sweet for eating. However, despite this, I decided to shake things up by adding some sweet apples for contrast.) 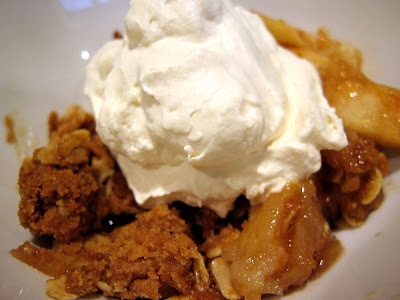 (Second quick tangent: Do you remember me discussing lack of lighting the other day as we head into fall? This is a good example: when I first served the dessert, the kids were waiting and so I just served it. But it was a Saturday night (I watch what I eat less on weekends) and I decided that in the interest of good photography, haha, I would have a second serving after they went to bed. The photo above was taken while the kids were waiting and I was in a hurry. The photo below was taken using the photo box, albeit with only one light because one was broken (the other photos were also taken with photo box, with white background).) 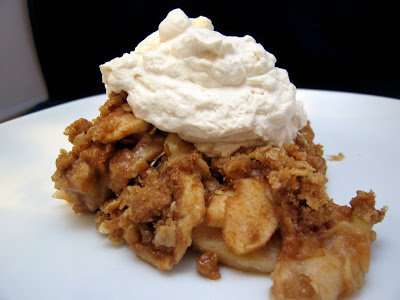 So back to last Saturday: I came home from the farmers’ market with my apples, made my Malaccan Beef & Vegetable Stew, and sat down to watch the Michigan-Michigan State game. Those of you who watch college football will guess that as a Michigan fan by the end I was a bundle of nervous energy. First and mostly we looked awful. Then suddenly with not much time remaining, Tate Forcier and co. step into the collective phone booth and emerge unstoppable, take the game into overtime, and throw an interception to end the game. Yikes. So I was twitchy and suddenly peeling apples seemed like a good way to focus myself.

This is what came out of that. And may I say it was really, really good. 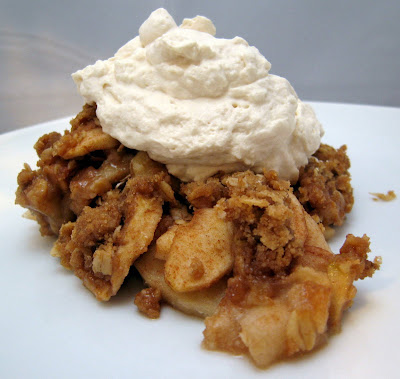 Crisp Topping
Adapted from Flo Braker, Baking For All Occasions

First make the topping by placing all of the ingredients into a mixer and mixing on low. Finish by rubbing and squeezing with your hands until the butter is evenly distributed and the mixture clumps. Set aside.

Then start peeling and slicing the apples. Place in a large bowl. every 2 apples or so, drizzle with a tiny amount of cider and toss. This will both prevent browning and add some zing. When all of the apples are sliced, toss with the cinnamon, ginger, brown sugar and flour. Place in the prepared baking dish. If it seems too sparse, quickly slice and peel another apple and toss in.

Crumble the crisp topping over the apples evenly, making sure there are no gaps. Place in the oven; bake until the topping has browned and the filling is bubbling. You may need to reduce the heat to 325 F toward the end.

Let the crisp cool at least until warm instead of hot. When ready to serve, whip the topping. Whip the cream until frothy and then add the vanilla and sugar Finish whipping until you have soft peaks and serve on top of the crisp.