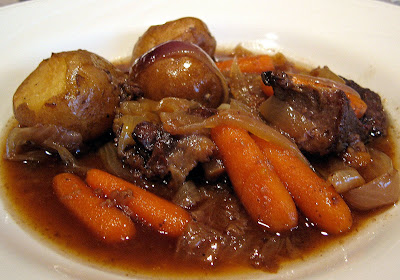 There should be more braised beef dishes on my blog. Seriously, if it was compatible with how I want to live from environmental and health perspectives, I would have some variation on pot roast every night of the week.

But alas I know I should not, so I try not to indulge too often. But the weather has had me hankering, and I basically took all summer off from pot roast, so I figured it was time.

I try to shake my pot roasts up quite a bit. For example, the Goan curried pot roast. This is not because I am bored with the classic beef, potatoes and carrots that I grew up with. On the contrary, my mom’s pot roast is my idea of comfort food taken to its highest level–at least on the savory end, I suppose her apple pie gives it a run for its money. But sadly I married a man who does not really care for pot roast.

Some of my regular readers are probably thinking it serves me right since I don’t like shrimp. To you I say but he does not like duck! So we are already even on that score. Plus, a braised brisket was the first meat my elder daughter ever ate–the meltingly tender texture a huge improvement over chewy and previously rejected steak. So my compromise is instead to search the world over for other culture’s versions of pot roast–including some more unusual ones from here in America. That extra bit of flavor makes pot roast a dish he enjoys, albeit only occasionally. 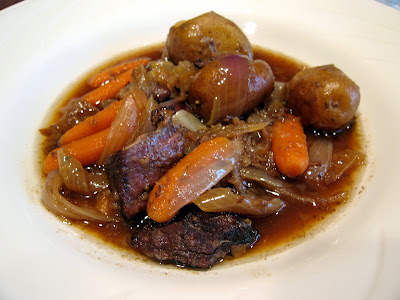 This pot roast is from Portuguese Malaysia–which is why the end result bears a great resemblance to classic beef stews. I have made it previously, at which time I made it strictly according to instructions, but I found the separate cooking of the vegetables to be not only fussy but also less flavorful (I love potatoes braised in beef broth/fat/juice). And I also found braising the dish uncovered to be slightly stressful–I had to watch it and frankly it added nothing to the experience for me. I prefer to shove that baby in the oven and walk away. So here is MY version of Malaccan Beef and Vegetable Stew.

And here I include the obligatory October quick note to say that light is fading, the days are colder, and alas my pictures are suffering. My in laws gave me a wonderful photo box last year for Christmas, and I am trying to use it more often, but it just does not happen much with dinner and hungry children. Try to pretend the lighting is better! 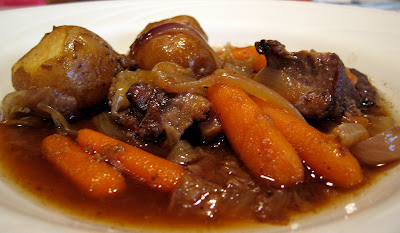 *I have noticed most chucks come in 2-3 lbs packages, so I usually make pot roast to last for more than one night. I also add more veggies than most people, in an effort to make the meal less meat-centric. Feel free to add or reduce to your preference.

Massage the double black soy sauce and black pepper into the meat and leave to rest at room temperature in a large bowl for 30-60 minutes. When you are ready to cook the meat, heat a 5 qt Dutch oven over high heat. Gently shake the meat pieces dry(ish) and dredge in flour and set aside on a plate. Add the oil; when it shimmers, add the meat and sear on all sides. Remove when brown to the bowl with the remaining soy sauce. Preheat the oven to 230 F (this dish can be made faster on a higher heat, but I wanted it in the oven before my football game started; just do not braise at higher than 300 F).

Add the finely chopped onions to the pot and cook for 5 minutes, reducing heat to medium if necessary to prevent scorching. Add the whole spices and cook, stirring, until the dish is quite fragrant (3-5 minutes). Add the beef stock and deglaze the pot. Return the meat, with juices and soy sauce, to the pot. Cover tightly and place in the oven. Cook for 1 hour. Then remove the pot, flip the meat over, and return to the oven for another hour.

After the first 2 hours, remove the pot and add the potatoes (scrubbed clean) and layer the sliced onions over that. Raise the heat to 250 F and return to the oven for another hour. Remove the pot and add the carrots and cook for another hour. 20 minutes before serving, raise the heat to 300 F. Taste for additional salt. Serve in wide flat bowls; remove pieces of meat, potatoes and carrots, and then ladle onions and gravy over the entire thing.