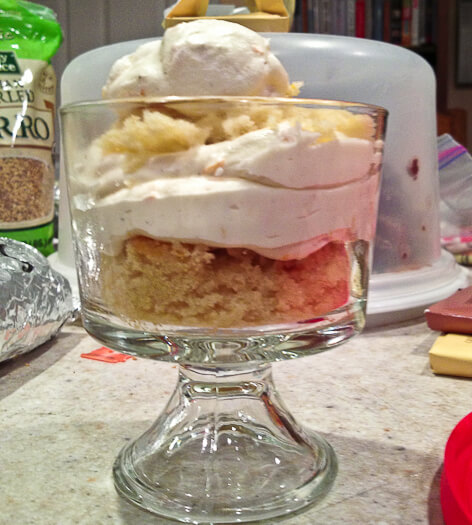 You might have guessed from both my title and my picture that this month’s BundtAMonth did not go as planned. The first problem was that I just did not have many occasions on which to bake a bundt cake, given that I was sick throughout the holidays. Then, when I did make one, I made a fantastic mojito bundt, just for this occasion, see picture below. First problem was that I served it to dinner guests and never took pictures. The second problem was that I realized, after the fact, that I cannot in good conscience post any more cakes from Cake Simple: Recipes for Bundt-Style Cakes from Classic Dark Chocolate to Luscious Lemon-Basil

by Christie Matheson. The book is small, and I just don’t think it is fair to share quite so many of her cakes. Even if they are the most fantastic bundt cakes ever. So I scrapped that cake. 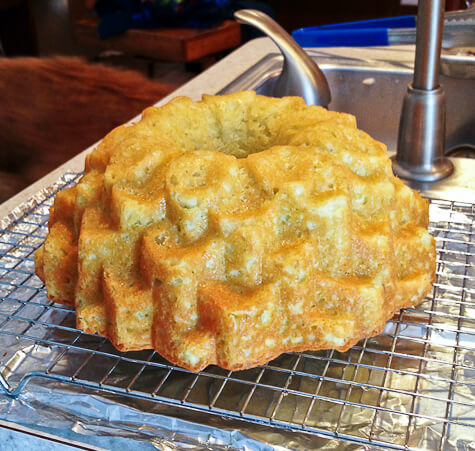 Then I lost track of time and realized I still had not baked a cake as of this past Monday. I decided to adapt a previous bundt cake of mine, this Vinho Verde Bundt Cake (which I highly recommend in and of itself). The flavor is wonderful, everything I was aiming for. But I think I will let the next picture speak for itself: 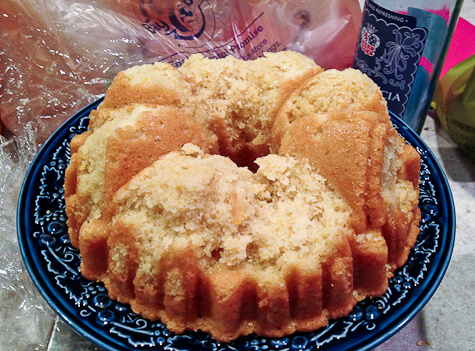 I currently have 3 working theories: something went wrong in the adaptation (which is why I do not have a recipe for you); gumminess from nonstick sprays is damaging my pans (this was an older pan); or the nicks that are in some of my older pans are causing a problem. Anyone want to add to the conversation? It was a bummer, because I loved the flavor: I added orange and lemon zest to the cake, along with some orange juice. The real difference maker was the teaspoon of fiori di sicilia I used in place of the vanilla. If you have never tried this stuff I highly recommend finding some. It is like flowers plus lemon plus vanilla plus a hint of orange. Absolutely delicious. 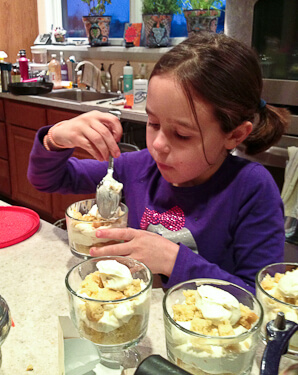 I am pretty sure every baker has the same solution for all types of cosmetic dessert fails. Trifles/parfaits. I have done it in the past (more than once!) and no doubt will do it again in the future since nothing comes out perfectly 100% of the time. Instead of sharing a recipe (since I do not have one I consider reliable), I thought instead I would walk you through my thought process for the trifle. First I decide just how fancy of a dessert I need. In this case it was just my family, so I wanted a few quick individual trifles, but otherwise we can just eat mangled cake. And as is pretty apparent from the pictures, the additional time needed to turn it into a trifle left me pressed for time which led to cluttered photos. But if I was making it for guests, I would have taken the time to find a lemon curd and had a triple layer trifle, which I probably would have layered into a large trifle dish. I knew that I wanted whipped cream in the dish, but since I was not making lemon curd, I wanted it to have more flavor than just heavy cream. Keeping in mind the theory behind Alice Medrich’s white chocolate mousse, I lightly whipped about 1 1/2 cups of heavy cream. I also melted about 5 oz of good quality white chocolate. To the latter I added the zest of one orange (after I wished I had added lemon zest as well) and about 1/2 cup of sour cream. I mixed it together (see photo below), which cooled the melted chocolate, and then folded it into the whipped cream. I skipped the chilling stage and layered it with the cake. 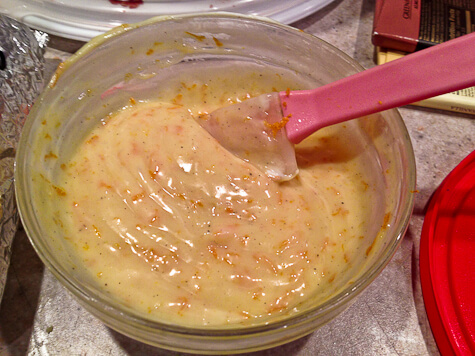 The final dessert was delicious. I am just sad because I really do not have the photos to convince you of that. Everything was rushed, and so my counter was cluttered.  And in the meantime, just to add to the overall sense of everything going wrong with this cake, I left my camera at my mom’s house this past weekend, which is where I was when I participated in Cook, Eat, Tweet. So these are iPhone photos, which means every bit of counter clutter is prominently displayed in the background! But hey if you want to check out some really gorgeous citrus bundt cakes, I suggest you go check out what everyone else was baking for January BundtAMonth!

Here’s how you can be a part of Bundt-a-Month:
– Simple rule: Use mandarin, orange, Citrus lime, yuzu, lemons, Key lime or ANYTHING citrus – and bake us a Bundt for Tangy January
– Post it before January 31, 2013.
– Use the #BundtAMonth hashtag in your title. (For ex: title should read #BundtAMonth: Chocolate Cinnamon Bundt)
– Add your entry to the Linky tool below
– Link back to our announcement posts.

Follow Bundt-a-Month on Facebook where we feature all our gorgeous bundt cakes. Or head over to our Pinterest board for inspiration and choose from over 350 Bundt cake recipes. 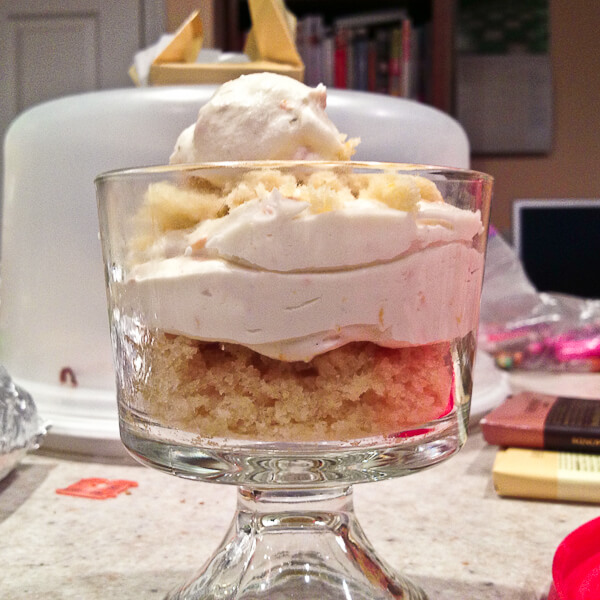