Mujadarra is a classic Middle Eastern dish of rice, lentils and caramelized onions, and it is the definition of comfort food as far as I am concerned. Affiliate links have been used in this post to items I am linking to. 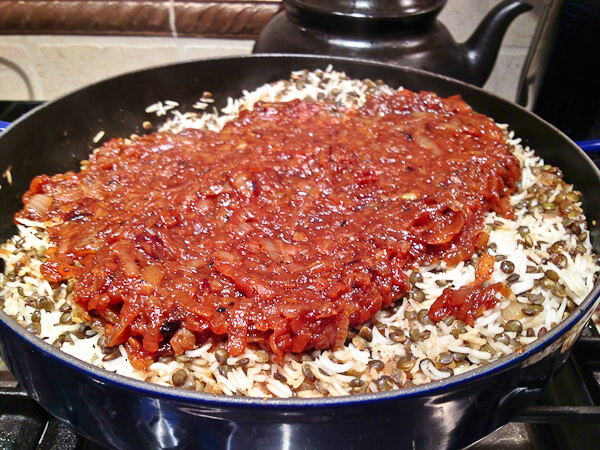 Guys! Cook, Eat, Tweet was so much fun! Not to mention delicious! If you missed the fun, here is the original announcement. In a nutshell, those of us involved in the Cookbook Tour for An Edible Mosaic: Middle Eastern Fare with Extraordinary Flair

threw a live cooking twitter party, where we all cooked the same dish from Faith’s cookbook (see the original announcement for her exact recipe). We fielded questions, shared experiences and photos, and just had fun. 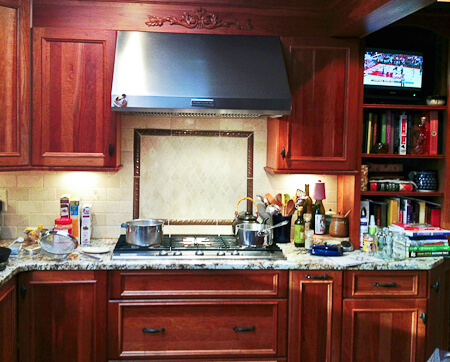 My experience was made all the more, ahem, exciting, by cooking in my mom’s kitchen. Don’t get me wrong, her kitchen, recently renovated, is a work of art. But it is still not my kitchen. For example, when slicing the onions, there were no onion goggles to reach for and sunglasses had to suffice. Because this recipe calls for a lot of onions. 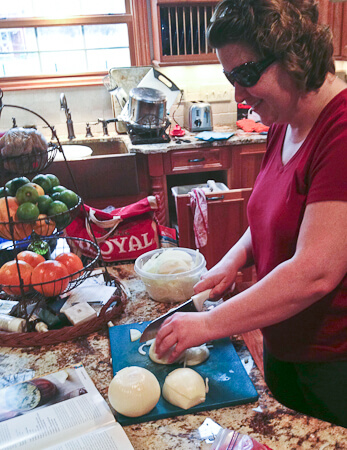 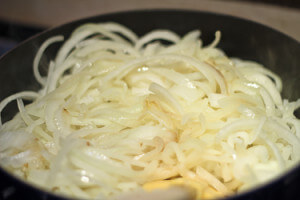 I also managed to burn a pan, because it was not as heavy duty as the ones I am used to. But c’est la vie–that’s how cooking in other people’s kitchens goes. And the dish still turned out fantastically.

We (and Faith, in her book) encouraged people to adapt as needed or inspired. For example, my mom does not keep bulgur in her pantry and I had not had any time to get any. So I made my mujadarra with long grain rice. Similarly, brown lentils would be used traditionally, but any lentil that holds its shape can be used, and so I used French lentils du puy, a type of green lentil which holds its shape really well. My mom did not have any green cardamom pods, and I grabbed my cardamom seeds, not pods, in my rush to get out the door to Columbus (where my parents live). The seeds definitely made a difference, as you encountered occasional bursts of fragrant cardamom. It did not bother me, but the pods are probably better for a less agressive, more blended cardamom flavor. 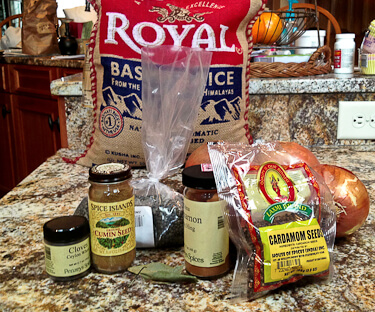 I have written the recipe below as I made it. I got some attention during the event because I used the pasta method for my rice. Those of you familiar with my blog, or more specifically my Indian rice dishes, may already be familiar with this method. Normally, the pasta method means you boil the rice, just like pasta, in salted water until it is quite al dente–but definitely not crunchy at all. Then you drain the rice, return it to the pan, and cover the pan and let the rice steam in its own steam for 20 minutes. At the end you have perfect, fluffy rice. 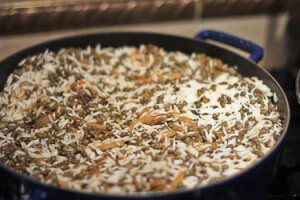 I have adapted this method to making pilafs and other rice dishes. In the past I have found cooking rice with meat and/or vegetables to be quite unreliable. Sometimes it works out perfectly, but half the time there is too much water in the dish (from the liquid in the veggies most likely) and the pilaf is mushy. I have also had the opposite happen, where the top layer of rice is crunchy. There is no way to be certain just how much water is in your meat and vegetables. I have no idea how people get it perfect every time and I stopped banging my head against that particular wall a long time ago. Instead, I boil the rice, just as I would any time I make Basmati, but instead of letting it steam alone, I then mix it into the (mostly) cooked dish and let it steam in a warm oven. I have never had this method fail.

I do want to clarify, however, for you Asian food aficionados or rice lovers, that if I am making Japanese rice or Jasmine rice or any rice where stickiness is desirable, I use a completely different method. 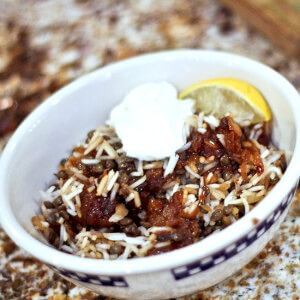 Check out everyone else’s mujadarra from Cook, Eat, Tweet! 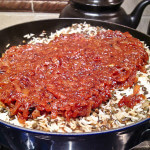 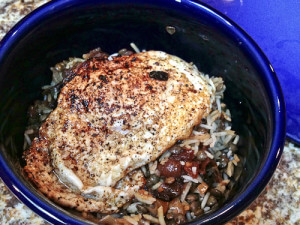