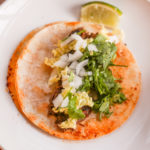 Birria de Res Tacos taste deliciously complex; much like Mexican mole or Thai curry, many ingredients come together to create a sum that is superior to the equal of its parts. Affiliate links have been used to link to items I am discussing. 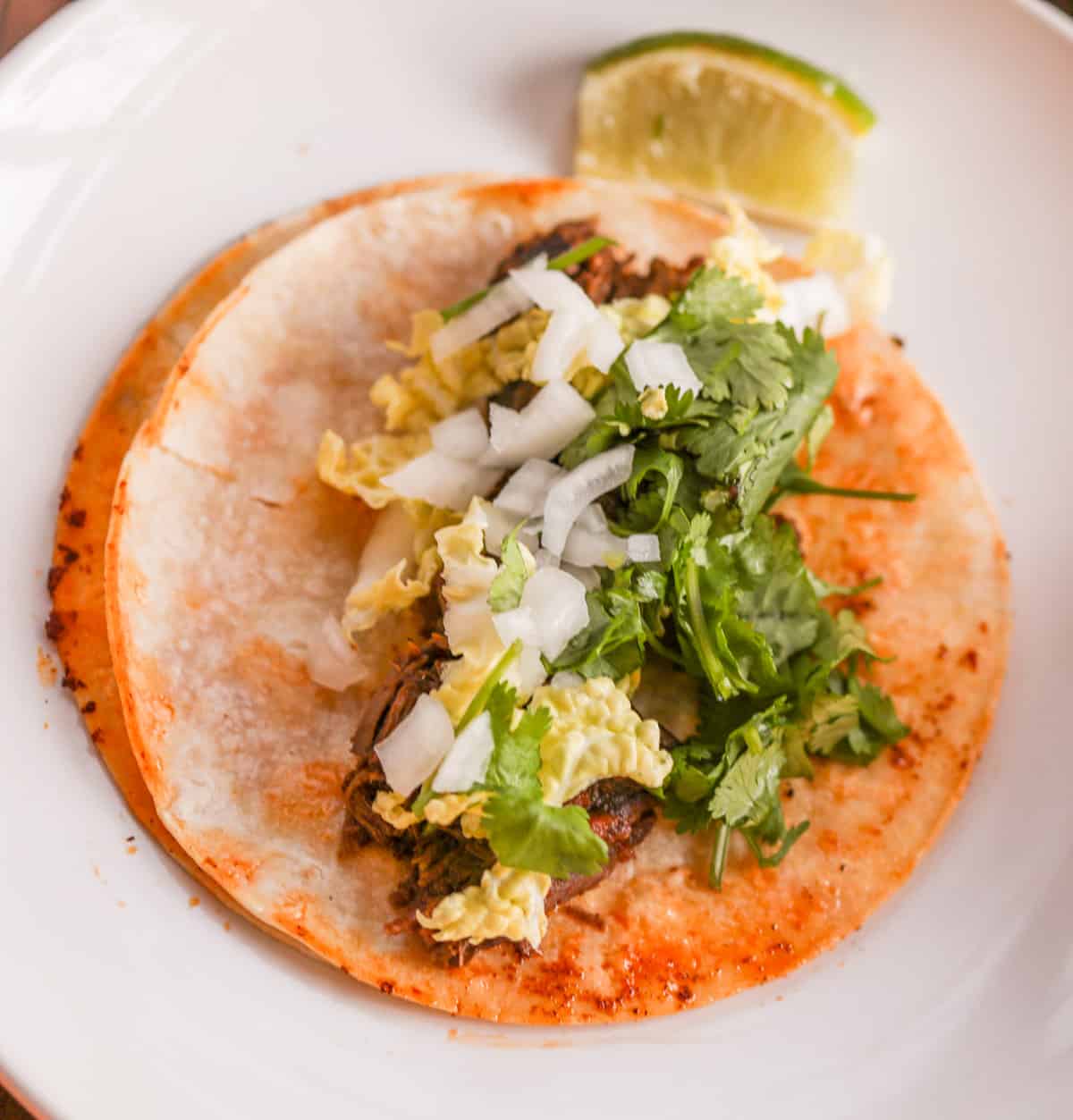 Guys I have been sitting on this post for a while. Photos edited, recipe written, and just feeling… stuck. When I was making it I had these thoughts going through my head about what it means to be a white American sharing international recipes whose culture does not run in my blood. To be honest, the main reason I had such heavy thoughts on my mind is because of an offhand comment in a New York Times article about “the Birria Boom” (which made me laugh because hanging out here in quarantine in Pennsylvania I had no idea that Birria was booming):

This means that, yes, somewhere, a white woman is sharing her “authentic birria” recipe made with boneless beef, packaged bone broth, a few shakes of smoked pimentón and some puréed carrots — the dark side of internet fame, for any dish.

So yeah there’s a lot to unpack there. On the one hand, the actual article got me excited to try making my own Birria. On the other hand, ouch. Dare I share it? And on a side note, is it culturally insensitive to use a boneless cut of meat to make a dish traditionally made with bone-in meat? It kind of reminded me of the time, a million years ago, when I was learning to make Indian food and carefully peeling my tomatoes because all of the recipes (at that time in the few cookbooks I had, this was 20 years ago) I saw called for it. I finally asked a friend, who was raised in India until coming to America for high school, college and graduate school. Her maternal grandparents lived here. Anyway, I will never forget the sound of her laughter as she informed me she did not know anyone who took the time to peel a tomato. There is a lesson somewhere in that. My thought is it is all in the presentation–as a white American if I tell you that Birria is traditionally made with a bone-in cut and that it provides important gelatin and flavor to the dish, but that this time I could not find a bone in cut, hopefully the NY Times food blogger police will not come after me. 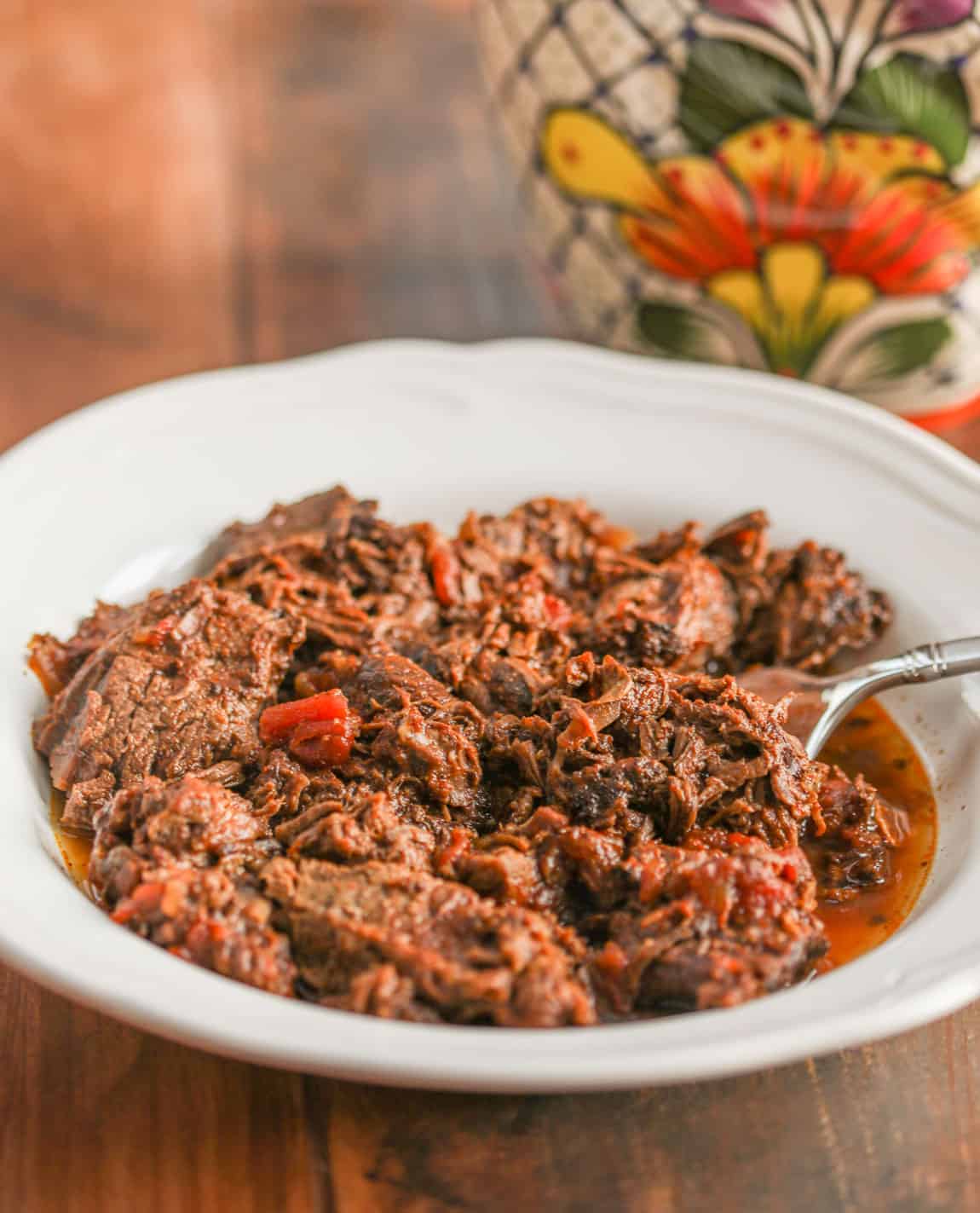 Which is all kind of a musing side note because as it happens I did use bones. Which leads me to what inspired me to actually sit down and start writing. Personally I always associated Birria with goat (I have read about it but never tried it as I have never seen it on a menu where I live, the boom notwithstanding), but having done some research it is also traditionally made with lamb. However I like the idea of the hardier goat, which got me thinking instead of subbing beef (my common fallback since lamb and goat can both be trickier to find) why not try bison? It is absolutely not traditional yet it honors the spirit of using a hardy animal that works with its environment, rather than an animal that needs irrigation and feed, etc to survive. There is a reason goat is consumed in many arid and rocky climes–it can eke out a living without a lot of human interference. Likewise the bison can survive on their own on the Great Plains, unlike beef cattle, which need a lot of human assistance to survive west of the Mississippi River.

I have discovered a few foodways related items in the last few years I have felt passionate about, and fair trade, single origin spices run a close second, but none have I felt so passionate about as Wild Idea Buffalo. I want to be clear, much like those fair trade spices, I have no relationship with Wild Idea outside of sending them my money to buy their delicious bison. This is me using my space to try to convince you of the fact that Wild Idea is doing incredibly important work–and I hope you choose to support them. It is a little ironic it is the bison and not the spices that this particular food blogger feels so intensely about but it starts with Dan O’Brien and his amazing writing. I was looking for books for our trip out West (before the world lost its mind back in 2019) and I stumbled upon his Buffalo for the Broken Heart: Restoring Life to a Black Hills Ranch. Being 100% honest I have no idea why I even read the sample. I am not a nonfiction fan (I had been looking for historical, romance or mystery!) and despite being a cattle farmer’s granddaughter I cannot say I am particularly interested in ranching.

But I couldn’t put it down. From that I went straight into Wild Idea: Buffalo and Family in a Difficult Land and by the end was certain I was a part of their family and completely invested in using bison to regenerate the Great Plains. (Which made it all the more devastating when our tour of the ranch was canceled due to a death in the family that to this day I am worried was a person I loved in the books but of course it would be creepy to ask.) I think if the story had ended there I would have promoted supporting them, much as I do the spice companies, but to see the bison in the wild immediately following reading the books? I cannot explain it, but it was almost spiritual. They are tied to our survival in terms of climate change because of the way they regenerate the carbon-sucking prairie, and they are tied to the survival of many bird species (essentially American bison are a lynchpin (or keystone) species). They also have that wisdom that certain large grazing animals seem to express, kind of like elephants. I could understand how Native Americans both consumed and revered bison. My mom just finished a painting I asked for based on a photo I took out West, and we finally got it framed (after the shut down) and I just asked my daughters: is it weird to love bison so much, to the extent of having this picture on my wall, and yet find them absolutely delicious? 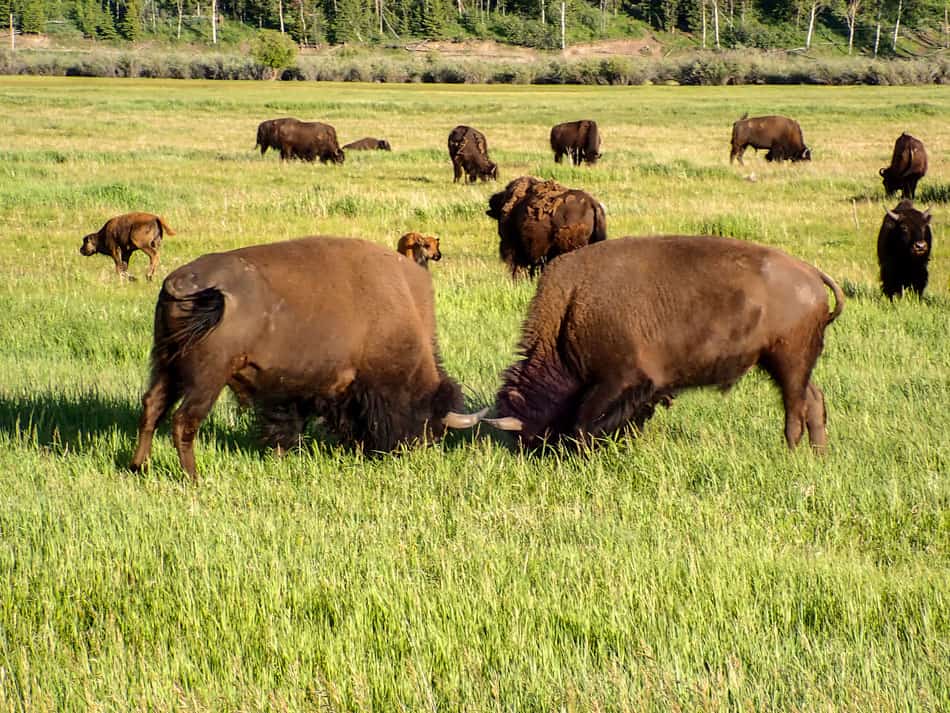 If I can get a photo that does it justice (it can be tricky because of lighting) I will share my mom’s painting–she is amazing at painting animals.

I’ve decided no. It is all the circle of life. And if you need one more reason to support Wild Idea Buffalo, please check out their Humane Field Harvest information. The feedlot model of harvesting meat has always been the step that makes me the most squeamish. I would much rather eat less meat and pay more for animals that lived free of the stress of feedlots.

If you are curious, to bring this full circle back to the Birria, I ended up studying the NY Times recipe referenced in the article above and a recipe in Margarita Carrillo Arronte’s Mexico: The Cookbook. I did make some changes based on necessity of what I had around, and I have explained those changes in the notes at the bottom of the recipe. It is my personal belief that we do the food of other cultures a disservice if we never try to make them to the best of our ability with what we have around (within reason). Just be aware of what changes you are making and why. 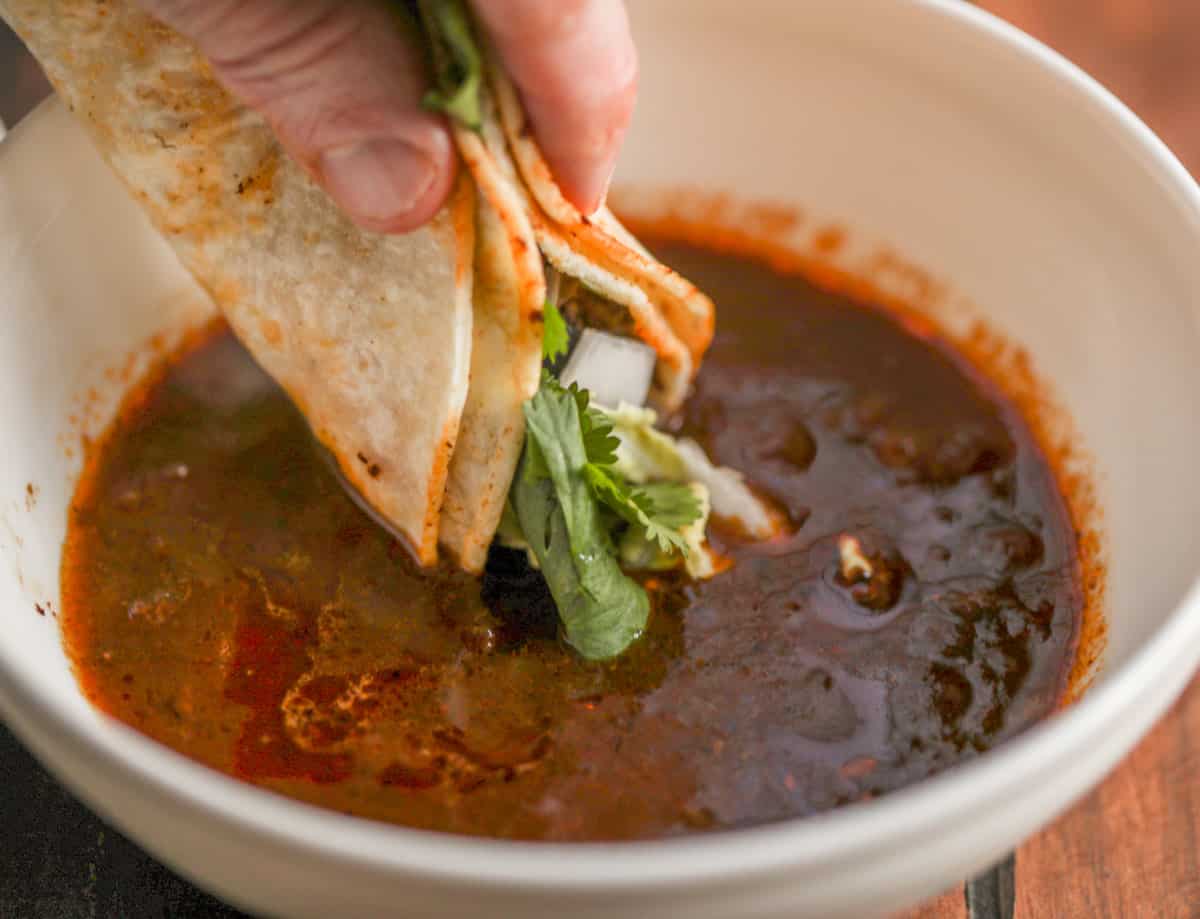 This recipe was adapted from studying an article in and recipes from the NY Times as well as a recipe from Margarita Carrillo Arronte.

**Ideally you would use 5 lbs of a bone in red meat braising cut. I was intent upon using bison, and Wild Idea Buffalo sells their bones separately so I added them separately. Do not skip the bones!

****As always when using a pressure cooker, check your model for best recommendations for time to cook meat stew. If using a lean meat like bison, err on the side of shorter time and be prepared to add a few more minutes at high pressure if it is not yet fork tender when you release the pressure. Meat with a lot of fat, like a beef chuck, will have more room for error in terms of overcooking and drying out.