You are here: Home / beef / Bibimbap (Korean Rice Bowl); Review of The Food of Korea

Bibimbap is a fantastic, healthy Korean rice bowl with ground beef and loads of crunchy vegetables. It is one of my favorite dishes ever. A copy of The Food of Korea was provided to me by the publisher in exchange for an honest review. Affiliate links have been used in this post to link to items I am discussing. 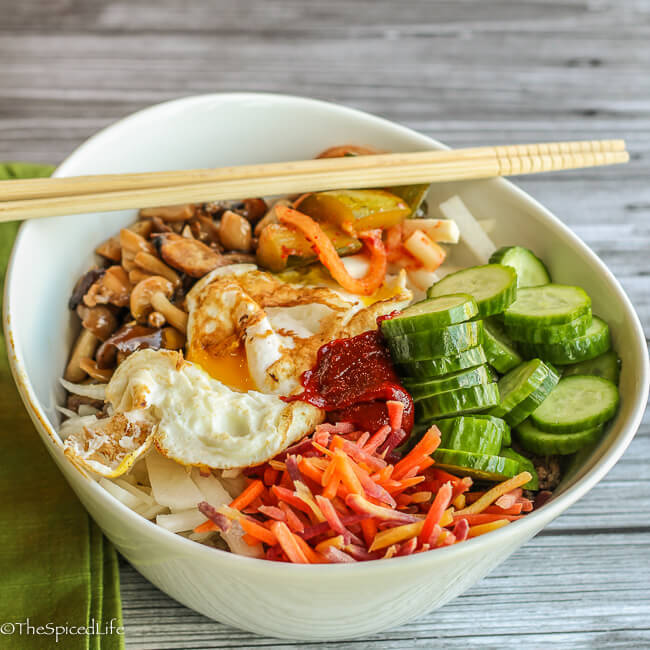 Sorry for my extended silence again. I had a rough week–I will have a post on that coming up soon–and between the rough week and the ensuing excitement over Italy, well, I have had some trouble focusing. We leave May 19 folks!!!! Eeeek! Squeeee!!

For regular readers who are wondering, I do have some recipe posts stored for you, but I also plan to turn the blog into a sort of open diary or letter to my friends and family back home. For long time readers, it will be very similar to what I did when we were in Morocco, only a lot more (since we will be gone 6 weeks) and of course I will not be writing to my kids since I will have them with me this time!  We will have a small kitchen, so you may see me attempting to cook also. We will see–I have never done anything like this before, so right now it is very hard for me to imagine! 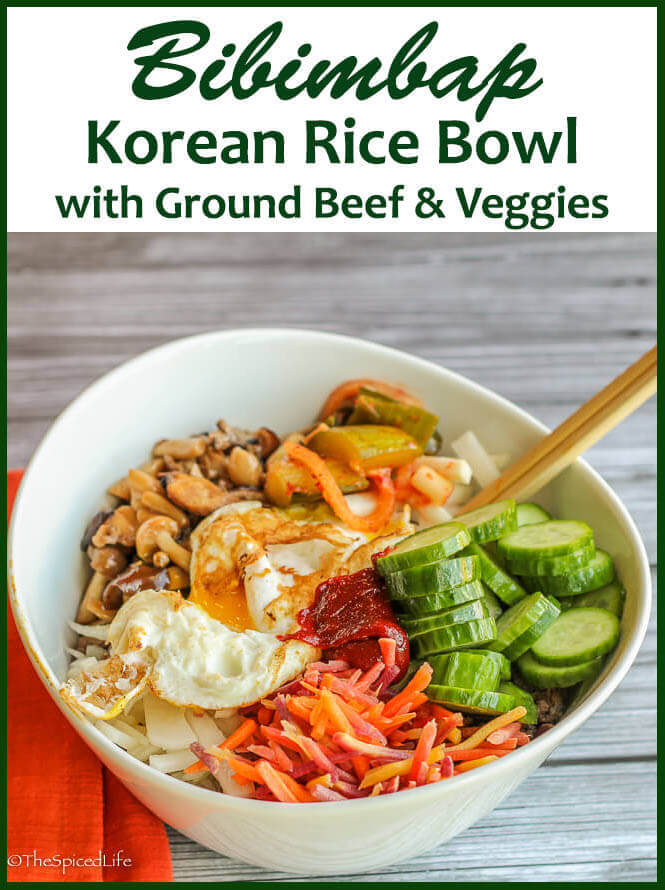 But about this bibimbap! I discovered bibimbap waaaaaay back in 1996 when I was living in Cambridge, Massachusetts. We lived around the corner from Inman Square, which it turned out was an awesome foodie destination at the time. There was a pan-Asian restaurant there that served a cold bibimbap, which means not only was it not hot, but the ground tuna and egg in it were raw also. I adored this dish–if I had only known just how stinkin’ hard it is to find raw bibimbap I would have savored my last one a bit more. I have only found it once since then. In the meantime I learned to love hot bibimbap, which is very similar except the meat and egg are cooked and then it is all served in a hot stone pot, which causes the rice to form a crust on the bottom.

Alas I have no oven safe bowls that would work, so maybe we should call my bibimbap warm. To be honest, I am one of the few who does not care about crusty rice, but if you do then by all means, grease the inside of an oven safe dish and heat it (my best guess is 350 F). Then quickly put your bibimbap together in the hot bowl. Even better yet, if you have a stovetop safe bowl, heat it over high heat for 3 minutes before filling.

I had never made bibimbap at home–not for any good reason. Sometimes I think when you learn to appreciate a dish in a restaurant it just somehow gets categorized in your mind as something too difficult to make at home. But when I received Injoo Chun’s The Food of Korea: 63 Simple and Delicious Recipes from the land of the Morning Calm the first recipe I looked for was bibimbap. The book did not disappoint. A slender volume packed with loads of information and color photographs, this cookbook is affordable and a great introduction to traditional Korean food, as opposed to (the equally exciting) cookbooks being produced by a lot of Korean American chefs right now. I have other recipes bookmarked, especially noodles and soups. And anything with beef–I adore the way Korean cuisine treats beef.

So about my bibimbap. Because I have eaten bibimbap so many time in so many places over the years I know what I like better with it. The crunchier the vegetable the better, and I especially love the veggies that are a little sweet and sour. Because of this, I followed the recipe in the book for the beef and the daikon salad, but I also then added a few more vegetable dishes of my own. The one super traditional element I left out–from laziness, as I like it fine–is some form of spinach. Mushrooms are a must for me, as are lightly pickled cucumbers. I chose to serve shredded raw carrots (to preserve the crunch–in Korea I guess they would blanch them) and I chose to lightly sauté my bean sprouts instead of blanching them. On the side I served (commercially prepared) gochujang, cucumber kimchi (SO good!!) and white cabbage kimchi (i.e., without any chile pepper) for the kids. I also added julienned jicama because I thought (rightly) that it would be fantastic and I had it on hand.

This dish is a great one to serve to those unfamiliar with Korean cuisine. First, the basic components are mild and full of familiar flavors (sweet, garlic, soy sauce, sesame seed oil). And each dish can be assembled to taste. The kids are not as familiar with bibimbap, so they loved parts of the dish but not all. The meat, egg and rice was a huge hit, as were the cukes and mushrooms. Sammy was ok with some kimchi but Alex was definitely not in favor of it (full disclosure: I hate preserved cabbage so I would not have eaten it either.  Alas, the cucumber kimchi only came spicy). Unfortunately the gochujang was too spicy for either child, which is a shame because that stuff is fantastic. Neither child cared for the daikon radish. John and I were in heaven with the entire meal, every single bite. I have to give a shout-out to both of my kids’ guests, who ate the meal without complaint! I will probably get a reputation as the crazy mom who serves weird food (and awesome desserts) but oh well. 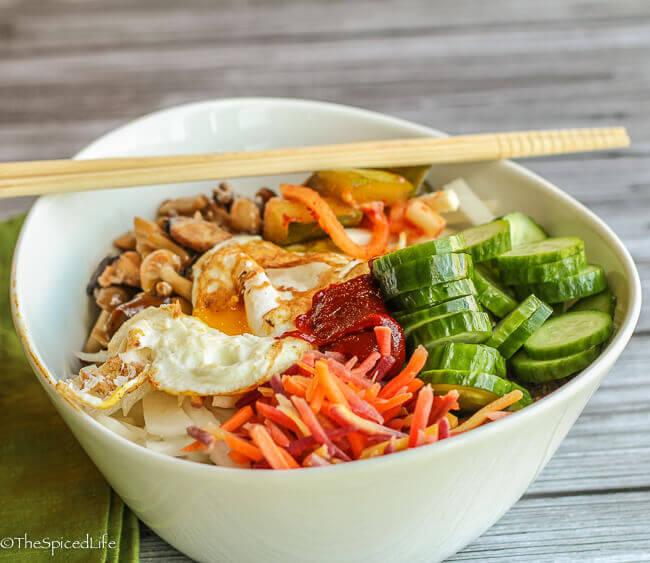 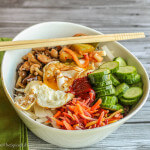 Print
Bibimbap (Korean Rice Bowl with Ground Beef and Veggies)
The beef and daikon salad are closely adapted from Injoo Chun; the remaining vegetables are by The Spiced Life.
Course: Entree
Cuisine: Korean
Author: TheSpicedLife
Ingredients
For the beef:
For the pickled cukes:
For the mushrooms:
For the bean sprouts:
For the daikon salad:
Additional un-seasoned or commercially prepared garnishes:
Instructions

*If you have never made sushi rice before, you do need to use an Asian style short grain rice and rinse the rice. Beyond that, every person has a slightly different opinion on how to proceed beyond that, unfortunately–I got my method from Seductions of Rice: A Cookbook

, which I highly recommend for anyone serious about rice. This method from the Japan Centre looks pretty good.