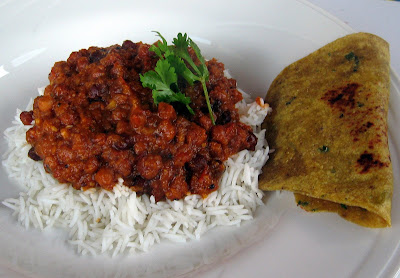 Holy moly I am in danger of being waaay behind. First I had nothing to write about (no recipes, I mean) and now I have too many. 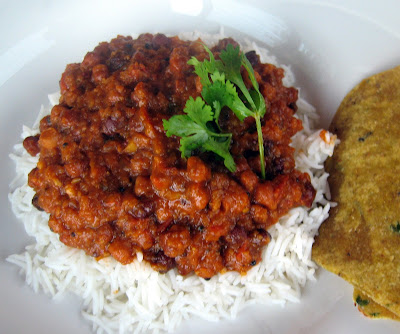 Such is life. And do I start a lot of posts with “Holy moly”? Probably says something about my mental state these days. 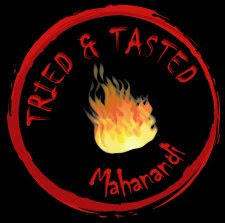 Anyway, I am early for once with a blogging event. I made Kadala Curry from Indira’s blog Mahanandi, Zlamushka’s blog of choice for this month’s Tried and Tasted. Inspired by Raghan Iver’s 660 Curries, which I have writted about before, I finally picked up black chickpeas (kaala chana) at Jungle Jim’s and had been looking for a use for them. They are smaller than the more familiar white chickpeas, or garbanzo beans, and seemed crunchier to us, although maybe I undercooked them. Kadala Curry is a black chickpea curry which reminds me of Chana Masala, except it has coconut milk and curry leaves, among other changes. Plus there are probably a billion recipes for Chana Masala, only a few of which I know, so maybe it is not that different at all. At any rate, this one originates from Kerala, a region/state of India, where it is apparently much favored. 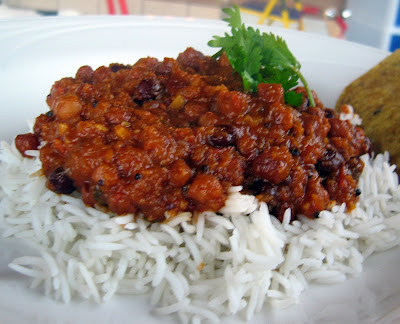 Indira’s recipe was quite good, although like some other Indian bloggers I have discovered, she, too, uses much less garlic and ginger than I would and so I did increase the aromatics. Otherwise I made the recipe exactly as specified. It was a big hit with the entire family; Sammy in particular devoured it. The coconut milk was not really noticeable to me, someone who is used to Thai curies, in the sauce so much as it added a really nice creaminess. She called for thin coconut milk so I used organic light canned coconut milk which is much more watery than regular canned. I served it with basmati rice and the Besan Thepla (Griddle Baked Chickpea & Whole Wheat Flat Bread) that I made for World Bread Day.