Thai Sweet Hot Garlic Sauce is very easy and lasts forever in the fridge. It is a necessity for spring rolls, and delicious on grilled chicken, pad Thai, fried rice, and a host of other dishes as well. My house is never without it! This recipe was first posted in April 2008–before I had even learned to not use a flash (egads!). So in December 2012 I updated the pictures of the sauce, but have left the pictures of the dish. 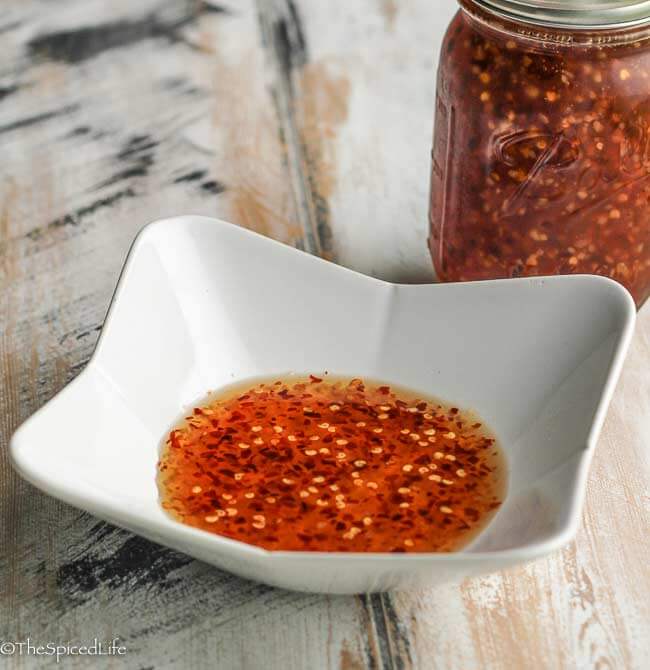 Has your life ever gotten so far away from you that no matter what you get done, 8 billion things fall into line, waiting to be done? That is how I feel right now. We spent the day cleaning under the couch (always a scary proposition, especially when you have German Shepherd hair to contend with) and straightening up the kitchen repeatedly—which is a mess still from dinner, despite all the work that was done earlier. My kitchen is too small and poorly organized (I can hardly wait to move!) and this last month has been so ridiculous with being sick and out of town so much I feel like I lost all of my organizational skills for dealing with it.

Thai Sweet Hot Garlic Sauce, or Nahm Jeem Gratien, is a classic Thai sauce that many of you have probably seen served as a dipping sauce for Thai spring rolls. Its uses are many and varied beyond that though, as a dipping sauce for grilled chicken, a dipping sauce for vegetables, and here in the States I would argue it is a great shortcut for making various Thai dishes, such as Sweet and Sour (featured here) and Pad Thai.  I always have a bottle of it in my fridge–and it lasts forever.

I wrote this recipe for Thai Sweet Hot Garlic Sauce from memory I have made it so many times. I originally made the recipe from Nancie McDermott’s Real Thai: The Best of Thailand’s Regional Cooking

. It has been so long since I checked the recipe I am not sure if it has been adapted much or not–as you can see it is a pretty simple formula. Regarding the chile pepper flakes, do notice that there is a lot of sugar and vinegar off-setting their heat. So definitely add at least one tablespoon, preferably more. Likewise, I also originally started making Sweet and Sour Stir Fry from McDermott’s recipe, although I then also learned to make that dish in Chiang Mai at a cooking class. 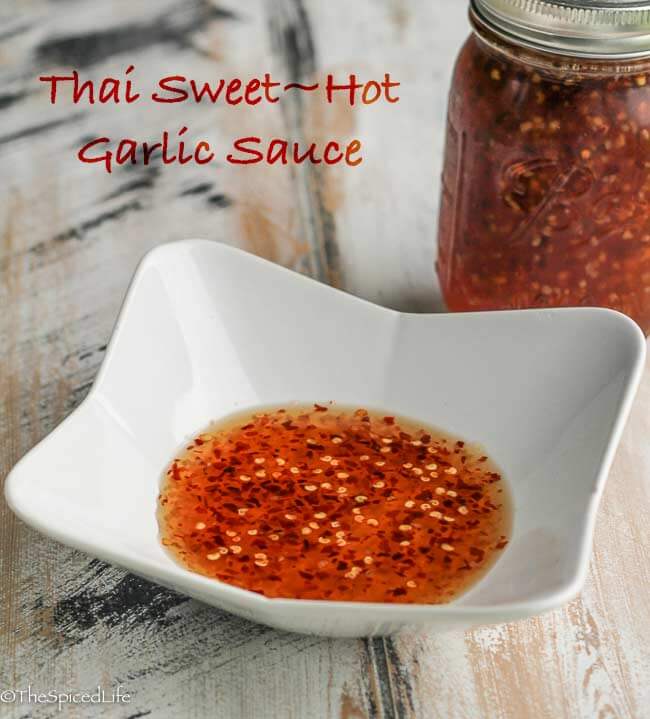 Print
Adapted from Nancie McDermott. This dish is great for using up whatever is in your produce drawer or freezer. For me, broccoli is necessary just because I love it so much in this dish, but in general if something sounds good, throw it in, and if I call for a veggie you dislike, leave it out. The pineapple is also important for flavor. And don't knock the cucumbers until you try them!
Author: TheSpicedLife
Recipe type: Entree
Cuisine: Thai
Ingredients
Instructions
3.4.3177
« Ellie Krieger’s Triple Chocolate Cookies
BBD #9: Oats: Maple Oatmeal Sandwich Bread »