Yes I am still sick. Same apologies for typos and photos (and the photos, by the way, were oddly blue–everything that was white turned blue and I have no idea how to fix it and somehow am lacking the energy to care much honestly). Anyway, these cupcakes were outstanding and they have a funny story behind them, so let’s focus on that and not the congestion, shall we?

Bobby Flay does not know it, but my daughter Alex (4.5 YO) is on a first name basis with him. She loves “Throwdown With Bobby Flay” and always roots enthusiastically for him to win. I think this stems back from the first episode she saw, the red velvet cake challenge. The cake baker was quite charismatic, and suffice to say his cake looked like something a 3 year old would want to eat. And so as she phased out of naps and into “quiet time” we would sit on the couch together and watch a Throwdown. At first she wanted to see the red velvet cake man every time–but she eventually figured out Bobby Flay held the show together, and decided she loved him instead.

We had not watched any in a while when earlier this week, exhausted from this virus, we sat down on the couch and started watching cooking shows. This eventually led to a Throwdown, this time the cupcake challenge. The minute they showed the first cupcake up close, all 3 of us (Sammy also) had the same reaction. We wanted a cupcake and we wanted one 5 minutes ago. So I promised them that sick or no we would make cupcakes the next day.

While the cupcakes were baking, this is what Alex told me: “I always root for Bobby. He made great cupcakes. Ever since I saw Bobby eat a cupcake *I* wanted a cupcake! Do you think we should show our cupcakes to Bobby so he will want a cupcake???”

Out of the mouths of preschoolers.

This recipe (the base recipe) comes from Rose’s Heavenly Cakes, the new cake cookbook from Rose Levy Beranbaum. I was reading a commentary the other day that claimed that this book, with its pictures of beautifully decorated cakes, was more appealing and accessible to women bakers than The Cake Bible, her seminal first cake cookbook. While it is true that I own and like both, I have to agree with the commentary. With the first book, the proof was in the doing, the actual baking of her recipes. I usually went looking for a particular recipe rather than browsing and making something unexpected. With this book, laden as it is with stunning, glossy color photographs, the proof that I want to make these cakes is sitting right there. I want to make them all.

Ironically there is not a photo for these cupcakes in the book, probably because it is the same basic cake as is featured elsewhere. I was intrigued by her method for making cake batter, in which the butter is not creamed, but rather added to the dry ingredients and then the eggs coming last. It worked fantastically (as though there was really ever any question–ha! Beranbaum’s books are detailed and tested down to the last itty bitty bit–I always follow her recipes the first time through). It was also much faster than the creaming method, which I definitely appreciated! 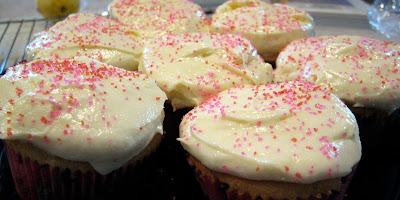 The frosting was also a different twist. It is Beranbaum’s “Dreamy Creamy White Chocolate Frosting” and it has a cream cheese base, but rather than using powdered sugar, it only uses white chocolate, which made it stunningly less sweet and more complex. I don’t usually care for white chocolate, but it was tempered by the cream cheese, sour cream and some lemon zest that I added. I also amped up the flavor of the cupcakes with Tahitian vanilla and lemon zest.

Tahitian Vanilla Cupcakes With Valrhona White Chocolate “Dreamy Creamy” Frosting
Closely adapted from Rose’s Heavenly Cakes (my adaptation was in the flavors, not in the basic formula behind the cupcakes and frosting)

Line 16 cupcake cups; lightly spray the pan/s with oil. This will ensure no sticking of the liners (this is my trick–maybe this cake wouldn’t stick, who knows? but I have been burned often enough that I am now cautious). Set aside.

In a small bowl, whisk the eggs, the vanilla seeds and extract, the lemon zest, and 3 tablespoons of the sour cream. Set aside.

In the bowl of a stand mixer (or with hand mixer), mix the flour, sugar, baking soda, baking powder and salt with the flat beater for 30 seconds on low. Add the butter and remaining sour cream to the dry ingredients; mix on low speed until the dry ingredients are moistened and a higher speed will not cause the flour to fly out of the bowl. Then mix on medium speed (high for hand mixer, 4 for Kitchen Aid) for 1 1/2 minutes. Scrape down the sides of the bowl.

Then add the egg mixture in 2 additions, beating on medium speed for 30 seconds after each addition and scraping down the bowl in between. Finish by hand if any parts have not incorporated so as to not overbeat.

Fill each cupcake 3/4 full (or use a #30 disher–which I did not have). Bake for 20-25 minutes, until a tester inserted into the center cupcake comes out clean with a few crumbs attached. Let the cupcakes cool in the pan for 10 minutes and then remove to cool completely before frosting.

Process everything but the melted white chocolate in a food processor until smooth. Add the melted white chocolate and pulse until smooth. Scrape into a bowl and place in the fridge to chill 15-30 minutes, until firm enough to spread (Beranbaum does not require this step but my frosting, while extremely tasty, was way too soft to spread. Maybe my house was too warm?).