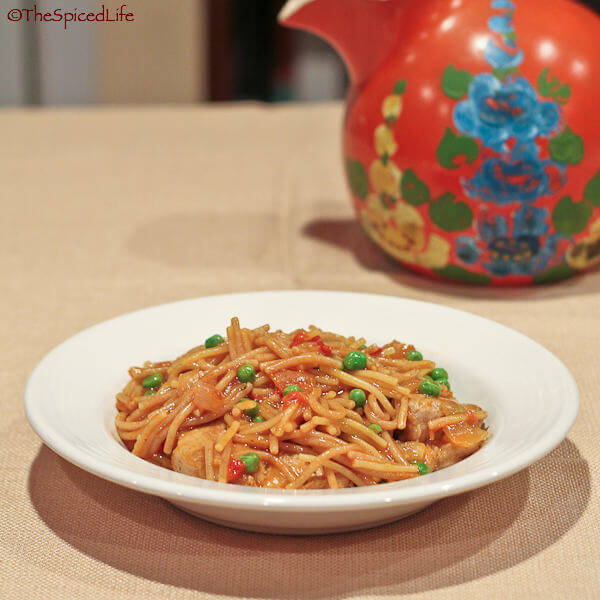 I swear I don’t do it on purpose. But somehow, whenever John leaves town for a conference, I seem to end up cooking something I know he would love. Sometimes I feel guilty about this. He is in Recife, Brazil for 8 days. I will let you draw your own conclusions about my guilt level this time.

Anyway, I went looking for a casserole to make with Alex on Sunday. And I learned something in the process. I would say that for many of us a casserole is something in a flat dish baked in the oven. But I can only guess that in Spain anything cooked in a cazuela, a clay pot “casserole” pan, qualifies, because I found the inspiration for this recipe under casseroles in Janet Mendel’s My Kitchen in Spain: 225 Authentic Regional Recipes

, but it cooks completely on the stovetop. It looks like a baked spaghetti, but in reality is more like a paella made with noodles (and is therefore much simpler and quicker than paella, which relies on rice that slowly absorbs liquid and expands). 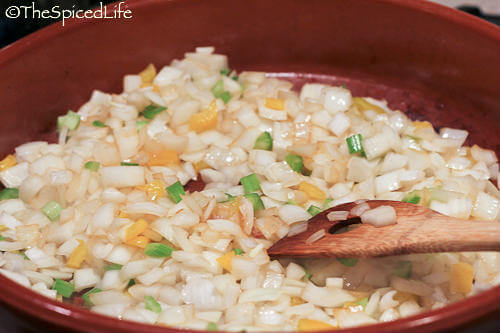 and then sautéing onions, peppers and garlic. I had limited peppers, so I added some celery for crunch (which I did not bother putting in the recipe) and then I also added some imported roasted piquillo peppers a little later in the process to boost the pepper flavor. For those wondering if the terra cotta cazuela makes a difference I will say this: I would not let a lack of the cazuela prevent you from making this, but I will also say that the aroma of the cooking dish was delicious and quite distinct, even early in the process. 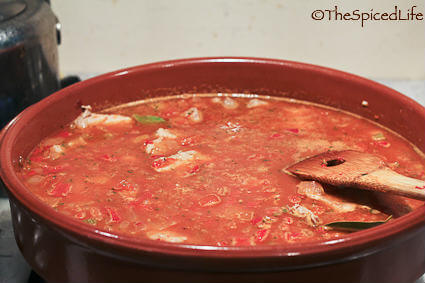 One of the unusual aspects of this recipe is that the noodles cook in the dish, not separately. (Alex was totally entranced by this fact.) So you will bring the liquid in the cazuela to a boil before adding the broken spaghetti or fideos. This saves a step and allows the noodles to absorb all of the scrumptious flavor from the aromatics, tomatoes and smoked paprika and saffron–so a double win! (A quick note: I believe broken angel hair or vermicelli would be closer to authentic fideos, but Mendel said spaghetti would work and I had some farro spaghetti I wanted to use, so I used it.) 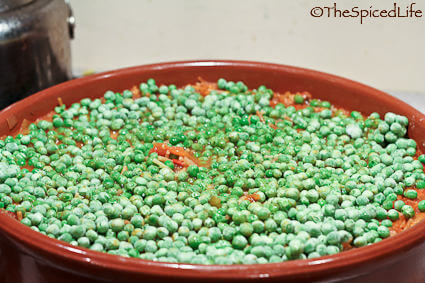 Just be smarter than me and remember to mix the peas in sooner! Although, on the other hand, if you strongly prefer your peas barely cooked, like us, maybe it is better to leave them until last and just sprinkle them on top? 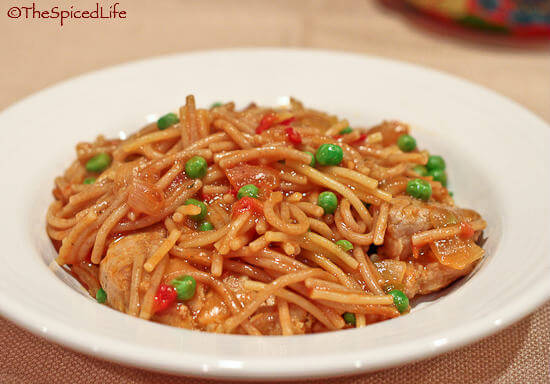 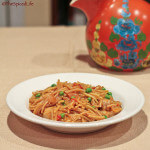 As always, affiliate links were used in this post, but only to link to items I would be linking to anyway.