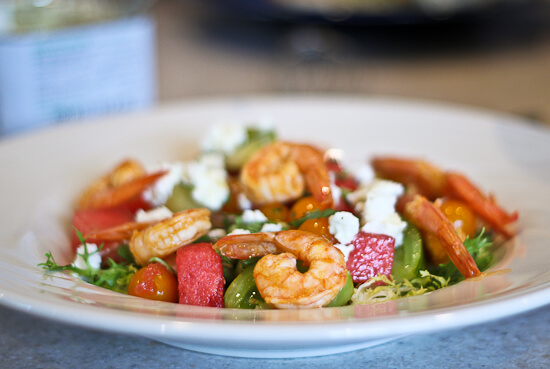 I might as well warn you now that The Spiced Life has been pretty shrimp crazy lately.  I think this is a result of 2 factors: shrimp are super easy, super fast and super light in this hot weather and also I think I am having beach nostalgia.  As much as I have gone on about being a homebody, the beach is one place I have nearly limitless tolerance for.  Had I been married to someone who could pick where he lived (instead of his job picking for us) I always swore I would live by the ocean.  I was so excited to get home–and now I just wistfully wish I was back there.

Except not really since the beach–our beach, the Outer Banks–is being evacuated for Hurricane Irene.  I knew there was something nice about living in the midwest! 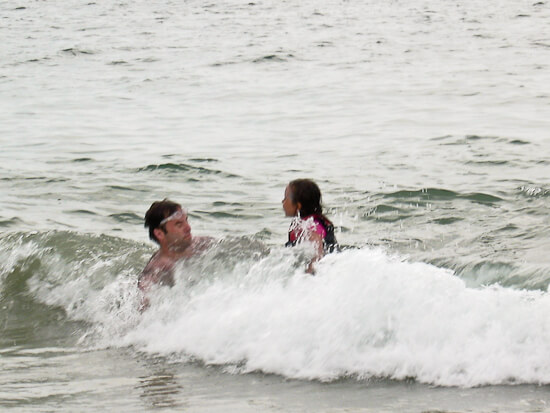 Calmer, yes, but not without some oomph.  Alex and John got taken out by the surf and happily I caught it.

This year the beach was especially fun because my kids are finally completely relaxed about the surf.  Both wore life jackets as a matter of routine (I think the tide/surf/undertow in the Outer Banks is to be treated with respect, even when there is not a hurricane!), but Alex is now strong enough to go without, under supervision.  The water was also calmer this year, leading to endless gossip sessions with my sister as we gently treaded water offshore.  Of course at one point I am fairly certain an osprey mistook us for something edible–I never thought to see the underbelly of any raptor that close!–and although it was gorgeous I am not sure I would care to repeat it. 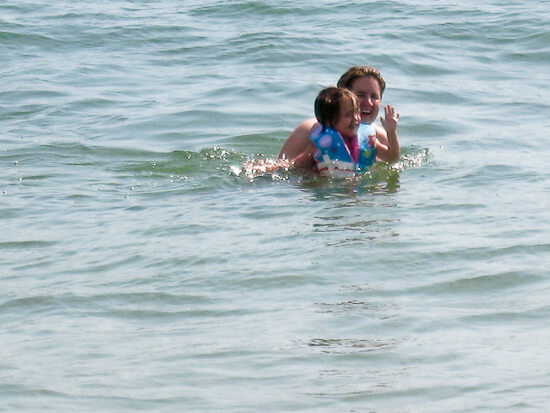 Sammy and I treading water.

The dolphins swam by in the morning as is their routine, and this year they came within about 10-15 feet of us, while we were out treading water, which was very exciting.  And the pelicans were astounding, diving into the water for fish.  Of course I don’t have any pictures of the local wildlife, just the tourist hooligans. 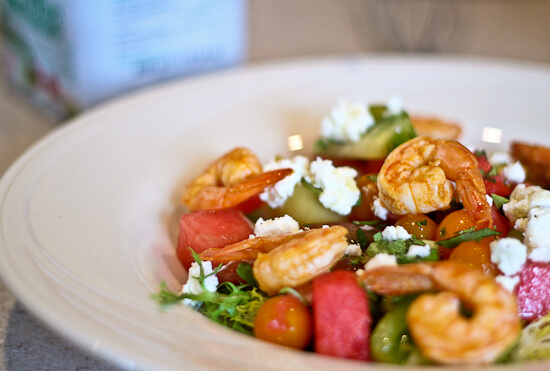 Anyway, this is a fantastic summer dish, especially perfect for guests for lunch, which is when I served it.  It is light and refreshing, and served with crusty bread it is plenty filling.  You can find the recipe here at Fine Cooking, and the only change I made was to sauté the shrimp instead of grilling it–because I am lazy–and to also offer some seared fish for those who were tired(!) of shrimp.