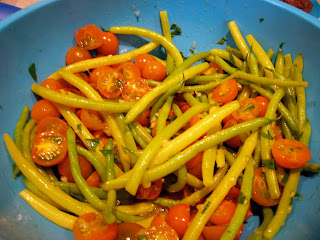 My garden has started to produce in the last week or so–late, yes, but I planted way late (June). I picked enough string yellow beans (not sure what they are called officially) earlier in the week to make a salad I found in Chez Panisse Vegetables. My kids and I were out in the garden today, weeding (we have had rain and the weeds are out-o’-control), and I was thinking about family gardens and what kind of family gardener I want to be. 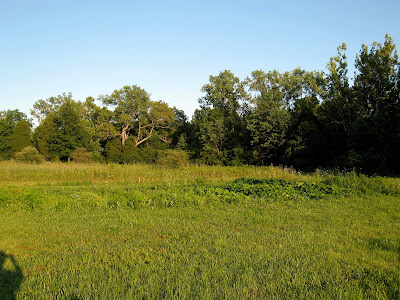 For example, by nature I am a control freak like my dad. I did indeed yell at Sammy 3 different times for stepping on plants and threaten to throw her out of the garden (which is somewhat absurd given how many weeds I have–she’s 2 1/2, how could she tell the difference? But not too absurd since she willfully ignored me a few times). I showed the kids the beans that were ready, but said I was not yet ready to pick another round. I wanted to wait until I could use them even though they wanted to pick them. 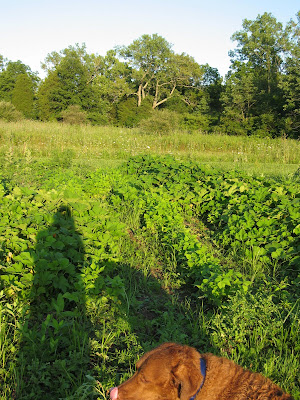 I’ve been thinking about this ever since I wrote that post about my grandma’s house and how it gave me an appreciation for living out here. All of my wonderful memories of gardening are from her house. Yes we had a garden my whole life–my dad loves his garden and I certainly do not have negative memories of the garden there, but I really don’t remember doing much with it. When we planted my current garden, my mom said it was the craziest, least organized garden she had ever seen–I said what do you expect with toddlers? How did they plant when we were toddlers? She snorted and said that we were not allowed near the garden then. 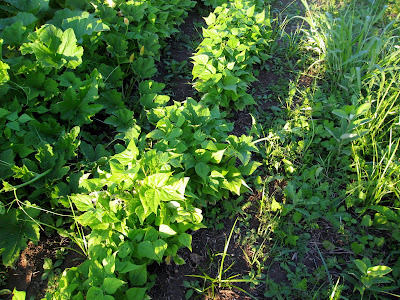 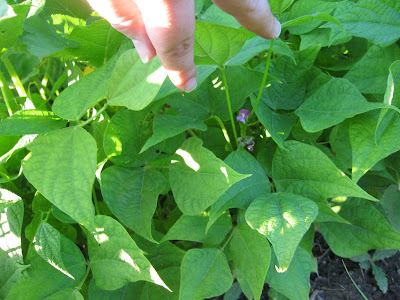 And here I am, parting the squash leaves, so you can see the purple blossoms of an overwhelmed bean plant. Because it has purple blossoms, I know it was going to be a dried bean plant, but whether navy, black or Christmas Lima I have no idea (toddlers planting, remember?). Not sure if I will find out now.

It’s true it is chaotic. Witness my rookie mistake–I planted squash in rows, the first no-no, and next to beans, the second no-no. One row of squash has completely decimated what was either a black bean, a white bean or a Christmas lima bean–it was going to be a surprise when we picked them. You can see, if you look closely, the tendrils of squash reaching out across a second row of beans in the pictures. The first row is no longer even visible. 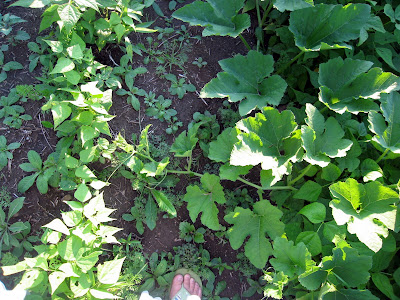 That is a squash plant, reaching out to the left into a 2nd row of beans.

But hey I do not have deer fencing or even dog fencing yet, so I have been laid back from the start. Witness the bean plants that have been entirely dedicated to critters from the woods. And all of the milkweed I refuse to pull, as long as it is not choking a vegetable, because I want Monarch butterflies in my life (we have found several caterpillars in the garden–my backyard is the best classroom 2 preschool aged kids could have). This garden is first of all a work in progress, but second and most important of all it is about having fun. 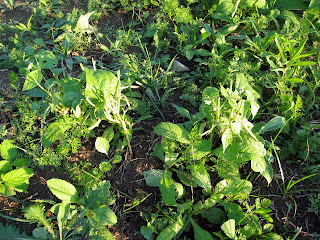 Here is my offering to local beasties–some beans plants that are regularly nibbled to the quick and that I refuse to let bother me. 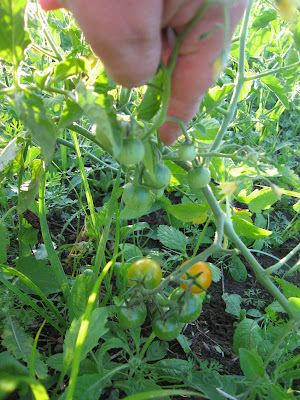 We picked our first 2 Sungold Cherry tomatoes (my only hybrid tomato plants) a few days ago. More are almost ready, as you can see. 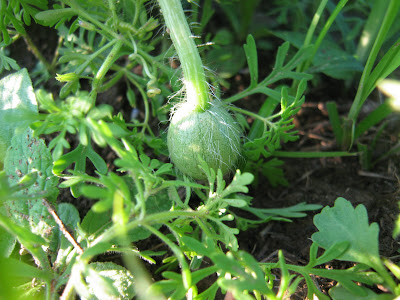 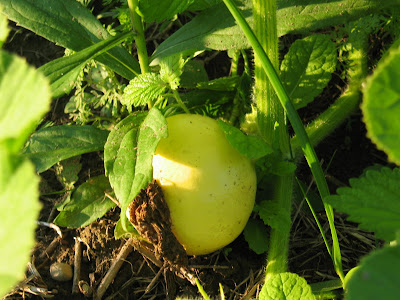 The first (of 2) baby giant pumpkin.

So tonight, when Alex asked if they could pick and eat beans, I thought of my grandma’s house, where I ate corn straight from the stalk and lima beans (which apparently, by the way, are not good for you raw), straight from the shell. Peas straight out of the pod and beans right off the vine. Maybe it drove Grandma and Grandpa nuts, I don’t know. If so they never said (to me anyway). But it made me want a garden and it made me want to garden, and I want that for my kids as well. So sure I told them. Eat as many as you want. 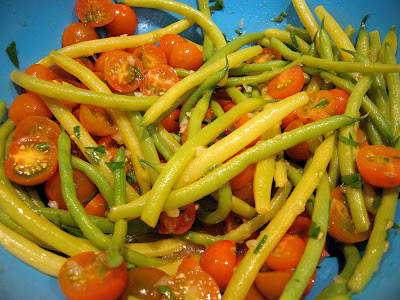 Blanche the beans until crisp-tender and remove to a colander. run cool water over it (I used to shock in ice water but Waters said it is better to cool in air, I compromised with the water). Set aside.

Slice the cherry tomatoes in half. Set aside in large bowl with cooled green beans. Toss with parsley.

Mince the shallot and put it in a bowl with the vinegar and salt and pepper. Drizzle in the oil, whisking to emulsify. Taste occasionally to see how strong you want it, i.e., how much oil you want. I don’t like a lot of oil. Dress the salad right before eating as the acid in the dressing with discolor the beans. Leftovers are decent but definitely diminished in quality.