You are here: Home / beef / Japchae-Bap with Bulgogi 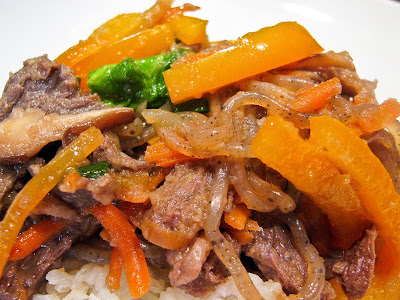 I’ve been inspired to learn more about and try to cook more Asian noodles lately, so the last time I was at Jungle Jim’s I investigated their Asian noodle selection, especially their fresh noodles. I was especially interested in trying to make japchae, a Korean noodle dish using sweet potato starch noodles (a thick glass noodle akin to a mung bean thread and similarly low carb and gelatinous). I discovered that while they did not have fresh Korean noodles, they did have the Japanese kind, called shirataki, which substitute perfectly.

Have I mentioned how much I love Jungle Jim’s? 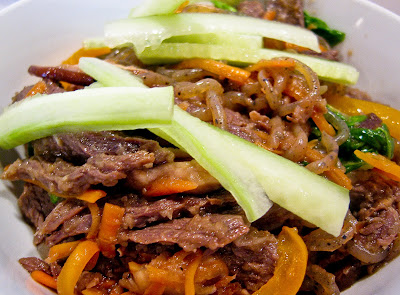 So anyway, I was planning to make japchae when I discovered that my brother and his family were coming to visit. I had no idea how the japchae would go over because honestly I had no idea how it would go over with my own family. We’ve never had it before, and I was not sure if it was a good gateway dish–you know, dishes you serve people who are mildly adventurous but unfamiliar with any X cuisine (in this case Korean). And I had just been discussing japchae with a Korean friend of mine who said she cheated by making it with bulgogi.

Now bulgogi, that’s a gateway dish. Succulent, tender, sweet and salty beef, I have never met any meat eater who did not like bulgogi. So I decided to make bulgogi and use it as the sauce to bind together the japchae, which I then served over rice. Turning it, technically, into japchae-bap (japchae served over rice). Japchae is traditionally frequently (although not always) served over rice, as the calorie-less sweet potato starch noodles are not regarded as filling enough. Filling or not, my Korean friend had told me she was surprised at how her son had rejected the chewy, gelatinous noodles, so I decided to play it safe with 4 young children at my table and serve it with rice. 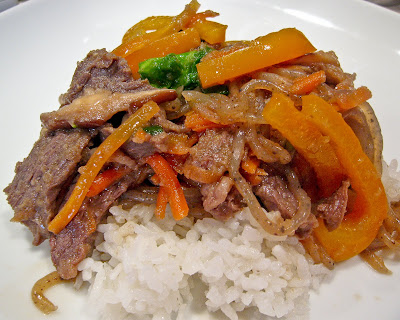 I do not have a Korean cookbook–an oversight I really ought to remedy given my love of the cuisine–so I turned to the internet for a bulgogi recipe (also because I did not want to bother my friend, although I do plan to compare recipes with her when I see her next). use real butter had a bulgogi recipe that she had in turn gotten from Kitchen Wench, a blog written by a Korean woman–and she shared her family recipe for bulgogi. Score. 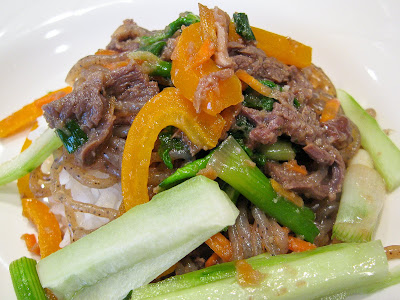 The only problem was that the recipe called for a pear, which I did not have. It did also call for the juice of one apple, so I finally used 1 1/2 Fuji apples, promising myself that I would also try it with pears when it was pear season (I’m a little fruity, haha, about buying fruit in season–the apples are believe it or not still local from last fall). I was fairly certain that the loss of the pear might result in a loss of complexity but that the marinade would still be quite tasty. I was right. 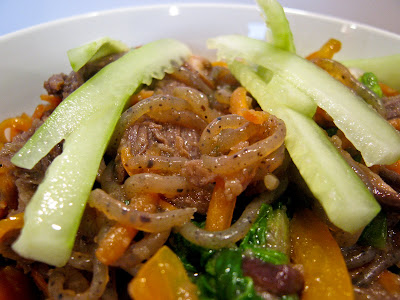 For bulgogi:
2 lbs beef–any boneless cut that you have frozen will work; I used skirt steak
5 cloves garlic, crushed
1 medium-sized peeled onion
1 nashi/Asian pear, peeled (I left out)
1 sweet apple, such as fuji, peeled (I used 1 1/2 to make up for pear)
2/3 cup Korean soy sauce (‘kanjang’), but you can substitute it with Japanese tamari soy or Chinese light soy sauce in a pinch (I used Chinese light soy)
2 T toasted sesame seed oil
2-4 T sugar (this will depend on the sweetness of your pear)
2 green onions, washed and finely sliced (I did not initially have–did add to the final dish but left out of marinade)
Freshly cracked black pepper, to taste

Let the beef thaw partially and then, using a good knife, slice it very thinly, as thinly as possible, especially if you are using a tougher cut like chuck, flank or skirt. Also be sure to slice against the grain with the tougher cuts. Set aside in a large tupperware or a ziploc plastic bag.

Grate the apple and squeeze the juice into a bowl, discarding the apple pieces (if using the pear). Ellie at Kitchen Wench makes a note that if the pear and onion are not grated by hand the marinade might be watery. With due respect to Korean grandmothers everywhere, I just could not make myself do that. After all I had a baby nephew to cuddle! So you can either grate the pear and onion by hand with a fine grater and add it to the apple juice, or do as I did and dump it all (apple in my case) in a food processor (without the cores of course). I did not notice any negative watery effect, but I was not comparing side by side of course. I did not process the green onions as I did not have them. If you choose not to use the processor, mince the remaining ingredients (garlic and scallion) and add to the marinade. Taste the marinade at the end–it should be sweet and salty.

When you have the marinade as you want it, pour it over the beef. Either seal the bag and massage or use a spoon to stir the beef, making sure that the marinade coats all of the slices all over. Place in the fridge for at least a few hours, preferably overnight (mine marinated all day, about 7-8 hours). Turn the meat every few hours.

Bulgogi can be cooked in a large saute pan or on a griddle with sides on a grill–do not try to grill the beef on the grates as it will just fall through the cracks. In the case of this recipe (i.e., the japchae), cook the beef in a saute pan where the juices can be retained. Heat a large pan on medium-high heat with a drizzle or 2 of vegetable oil. When it shimmers, add the beef and stir fry until it is cooked through. Set aside until ready to make the japchae.

Heat a large nonstick skillet or wok over medium high heat with 2 teaspoons of oil in it. Add one quarter of the bulgogi from the recipe above, along with the carrots, white ends of the greens onions and shitaki mushrooms. Stir fry until the shitaki mushrooms have released some liquid and cooked down, about 5-6 minutes. Dump this into a large serving bowl with the remainder of the bulgogi (warm it through if it has cooled). Return the skillet to the heat with the rest of the oil. Add the noodles, along with soy sauce to taste, the maruba santoh, sweet bell pepper and green ends of the scallions. Stir fry until the leaves begin to wilt. Add to the serving bowl and toss it all together. Serve garnished with the cucumber sticks over a medium grain rice such as Kokuho Rose.