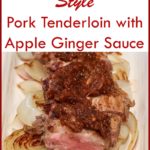 Izakaya Pork Tenderloin with Apple Ginger Sauce is a delicious and succulent method of preparing pork that is inspired by the dishes served in Japanese pubs. A copy of The Real Japanese Izakaya Cookbook was provided to me in exchange for an honest review. Affiliate links have been used to link to items I am discussing. 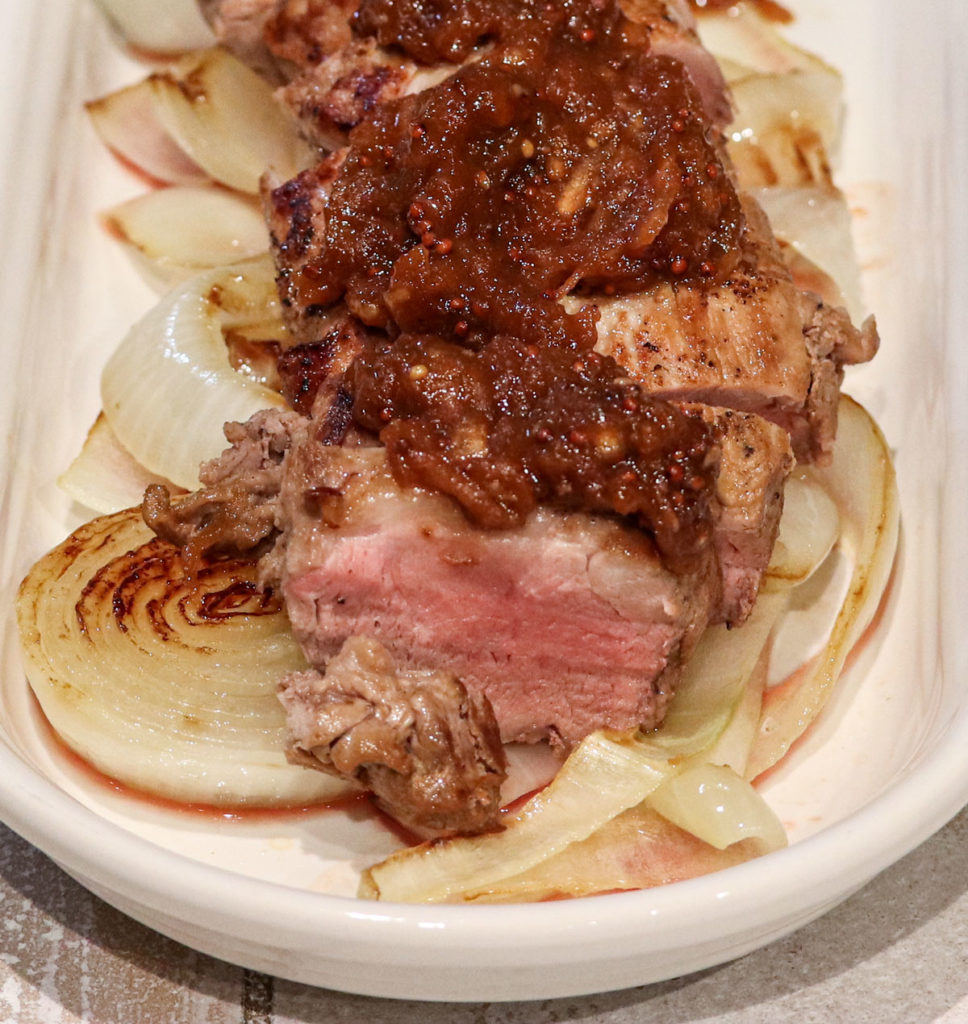 I was feeling a lot more in the swing of things after Christmas, but then I got my blood results for the cancer markers they are checking on regarding my thyroid cancer. They were not bad but also not good. The honest truth is since then I have not been sleeping well and I got such bad TMJ that I slipped a disc and could not close my mouth. Which kinda put me off food blogging.

But I am finally chewing again, I got my blood drawn today, am set on feeling optimistic, and am stuck like everyone else at home right now while I socially distance (or is it social distance?). So I am determined to get back in the swing of things. 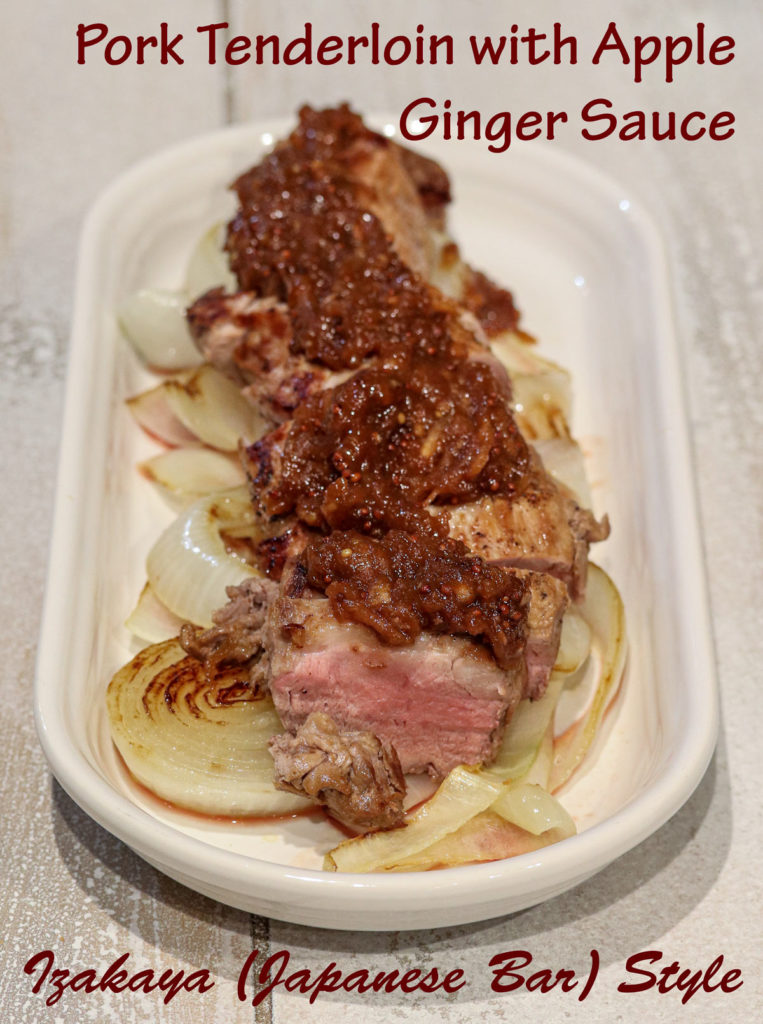 I was not sure what to expect when Tuttle Publishing sent me The Real Japanese Izakaya Cookbook: 120 Classic Bar Bites from Japan. Bar food in general is not usually my thing to make at home, but to my surprise I immediately bookmarked several recipes. Like many Tuttle books, it is a smaller cookbook, with an explicit focus on the food served in Japanese pubs. And also like many Tuttle cookbooks, it probably will not be anyone’s idea of a coffee table book, but it is a great resource for a specific cuisine. And the recipe I chose to make for this post, this Izakaya Pork Tenderloin with Apple Ginger Sauce, was a serious winner.

I definitely made some changes. First, and maybe this is just a cultural difference, but I have never seen pork shoulder steaks for sale, and honestly even if I had, some sort of tender cut from the loin sounded better to me as this is not a super slow braise. I doubled the recipe (which as written served 2) and used two pork tenderloins. I used more apple than was called for because I expected to love the sauce (and did) and preferred to use the entire apple. I was out of mirin, so I substituted some coconut vinegar and sweetener, but I have written the recipe as calling for mirin. The recipe calls for dipping each bite into a garlicky Dijon mustard, but I was out of traditional Dijon and the idea of using the whole seed rustic Dijon mustard that I had as a dipping sauce did not sound great to me. So instead I just stirred some of it into the sauce after removing it from the heat. Last, I greatly increased the onions because that is what we always fight over in this family!

This Izakaya Pork Tenderloin with Apple Ginger Sauce was loved by all. We devoured it. I struggled with the lighting (it was dark outside) with these pictures, so I hope they adequately reflect how delicious it was. I would eat this year round, as I can imagine somehow converting it into a grilling recipe in the summer, but obviously it is best when apples are in season. The recipe did not call for any particular kind of apple, so I would use whatever sounds best to use. I used a sweet apple because I made it during Honey Crisp season, but I could also see making it with a tart early apple and maybe adding a little extra sweetener of some kind if it needed it. 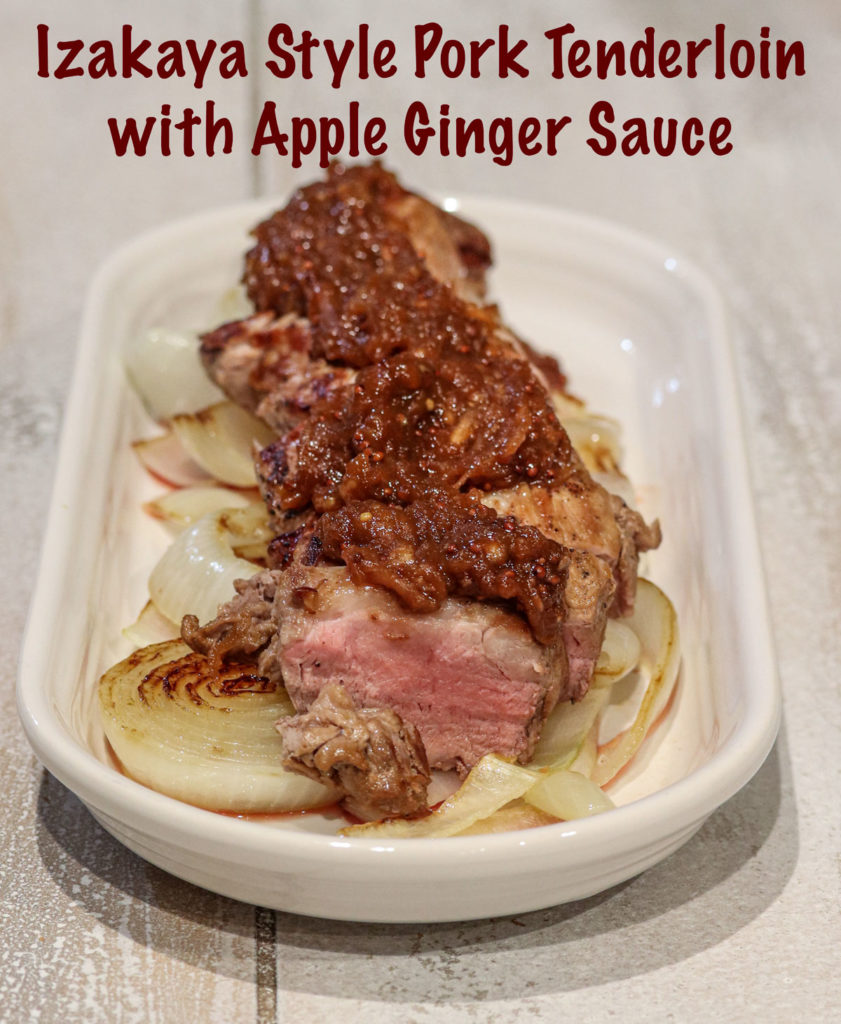 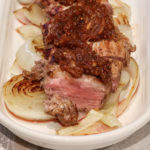 *I did not have any garlic (or more accurately I only had garlic paste) so I used some garlic oil with my olive oil. That is why you will not see garlic slices on my dish.

Looking for an Izakaya Pork Tenderloin with Apple Ginger Sauce collage to pin? 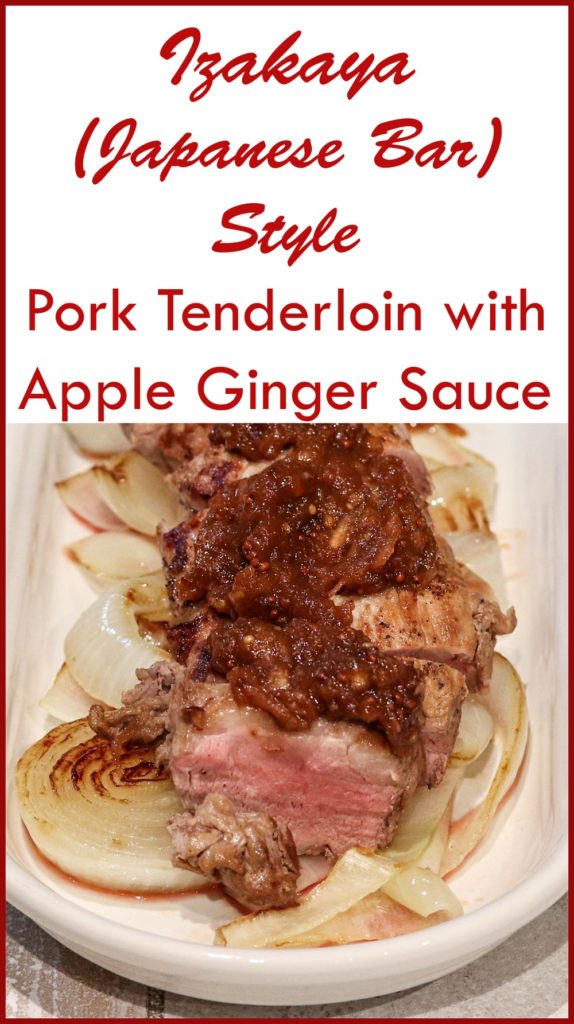