You are here: Home / salads / Indian Black Rice Salad with Peaches and Cucumbers 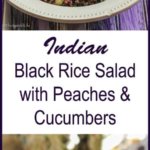 Indian Black Rice Salad with Peaches and Cucumbers is a fun and different twist on grain salads, perfect for summer when peaches are at their prime. 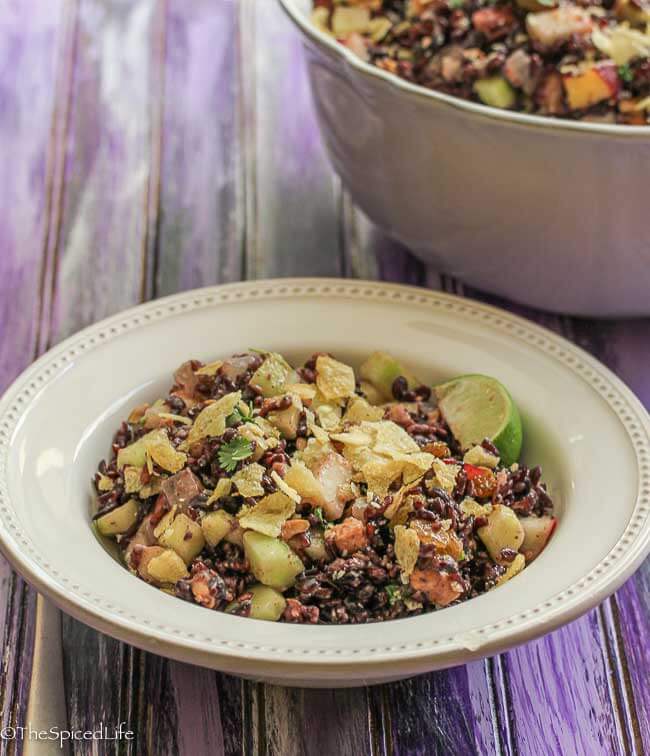 Uh… maybe you were expecting a cookie. Somehow we dropped the ball for June 2018 and no Creative Cookie Exchange ended up happening. But hey it is the first month we have missed since September 2013–so that’s not bad. And the grain salad bonanza continues! So I hope you are not tired of them; from my perspective it is hard to get tired of them as long as it is warm out. Keep reading down below for how I came up with this black rice salad, but first some puppy news and pictures. 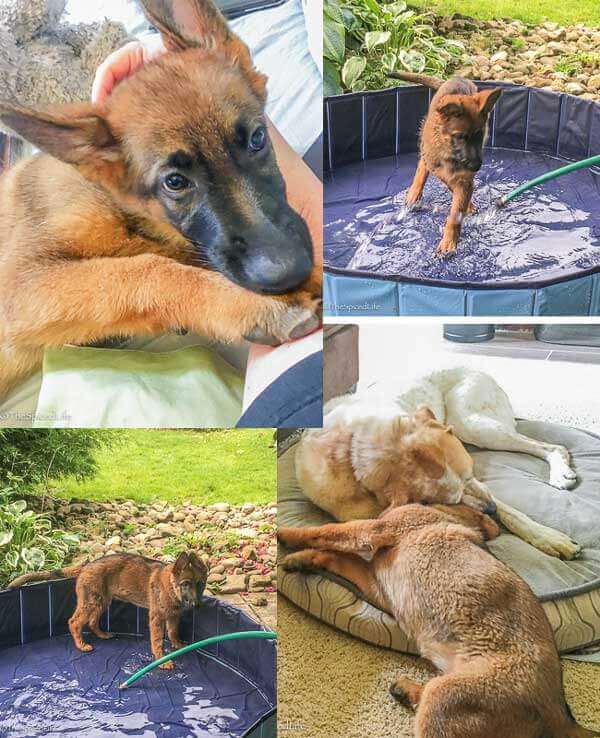 We are definitely at the love-hate stage of puppy rearing. You know, that point at which everyone starts muttering about how the only reason puppies survive is because they bank on being so adorable. Alex has announced she plans to never own a puppy and only adopt adult dogs. The biggest problem here is that our fenced backyard is a minefield of potential puppy catastrophes because the previous owners did a lot of landscaping with poisonous plants (various types of lilies) on a bed of rocks, which have chipped into smaller rocks, which means I am either fretting she will break a tooth or swallow a stone. And constantly removing said tiny rocks from her mouth (ouch puppy teeth!). The front yard is much easier but not fenced. So there is no good way to relax while watching the puppy. And she is the most self-entitled puppy I have had since Finnegan, who probably would have given her some competition there. She thinks everything belongs to her. Poor Roger, who has learned to love wrestling with her as you can see above, has had all of his harder toys taken away for fear Skadi will break teeth on them.

OK after a paragraph of venting I will say when everyone but me was gone last weekend she let me sleep between 9-11 hours each night, so clearly she is still amazing. We just gotta get past the alligator stage! 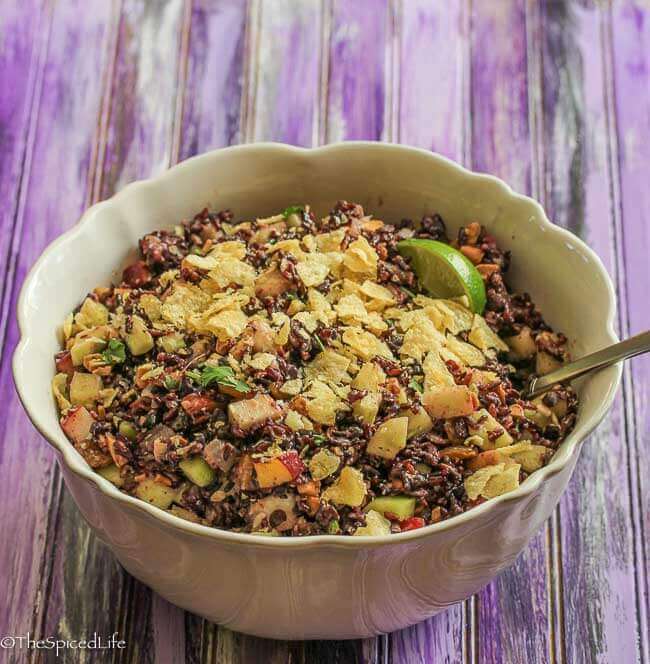 OK back to grain salads! I wanted to make a salad using sticky black rice, the same type of rice used in Thai desserts, because it has such an awesome texture. Sticky does not actually describe it well, it is more similar to farro but with each grain having an individual pop that farro does not have. I added the split peas for protein. For the flavor profile, I was inspired by the Chickpea Curry with Cucumber Salsa I made last fall, where I was seriously wowed by the combination of peaches, cucumbers and Indian spices. 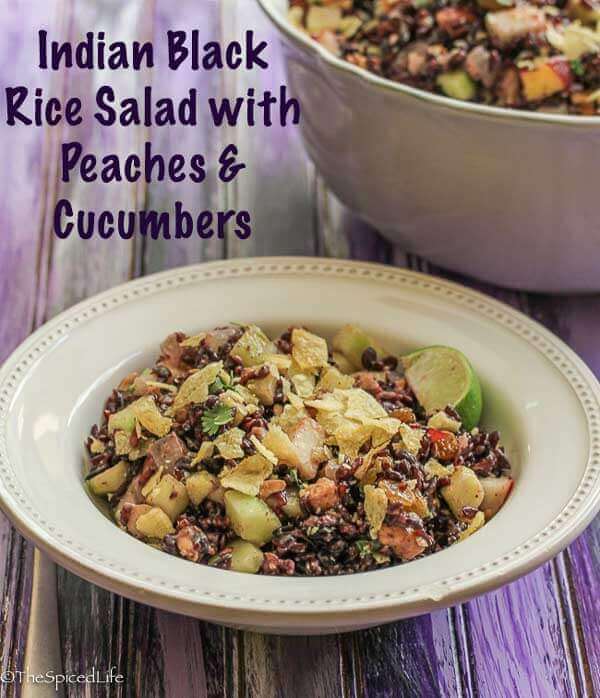 You could stop there and be happy with this Indian Black Rice Salad with Peaches and Cucumbers. But I really love some crunch in my one pot meals for contrast, so I was looking for some last minute crunchy garnishes. For protein’s sake I used cashews, but truthfully they were just not crunchy enough. I was thinking about how tortilla chips always solve this problem for Mexican dishes, and then it struck me, why not a few potato chips? Not enough to make it unhealthy, just enough to add some serious crunch (and be sure to use a crunchy style of chip, like kettle cooked). It worked perfectly!

This black rice salad went over really well with my family, especially Alex who enjoys grain salads like I do and adores Indian flavors. Well we all adore Indian flavors, but I think south Indian vegetarian food is pretty much Alex’s favorite right now. 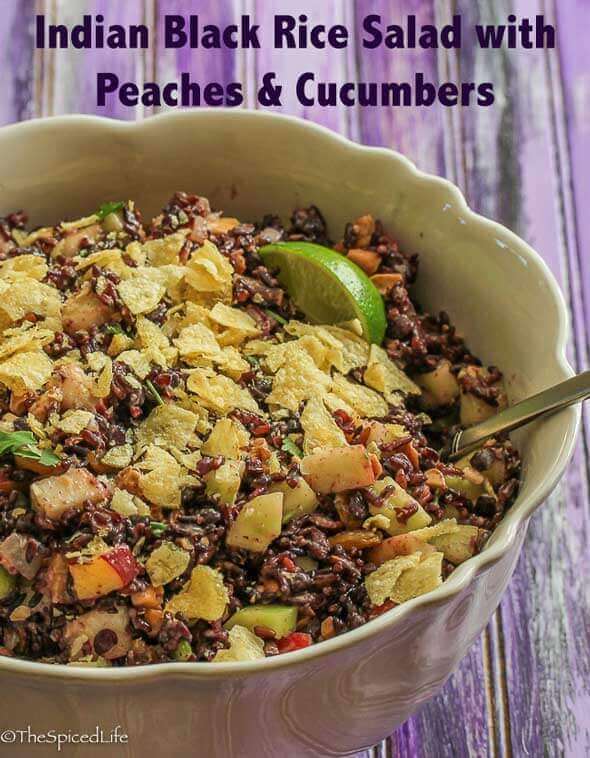 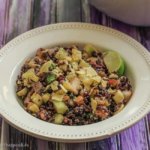 The sweetness of the peaches you use will affect how much sugar you use. If they are super sweet you could even reduce the amount of raisins used.

Looking for an Indian Black Rice Salad with Peaches and Cucumbers collage to pin?