You are here: Home / Filipino cooking / Filipino Black Bean and Sausage Pasta: Review of The World of Filipino Cooking 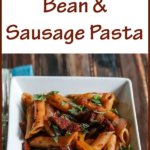 Filipino Black Bean and Sausage Pasta fuses European and Asian flavors to create something unique, hearty and delicious. A copy of The World of Filipino Cooking was sent to me for the purposes of an honest review. Affiliate links have been used to link to items I am discussing. 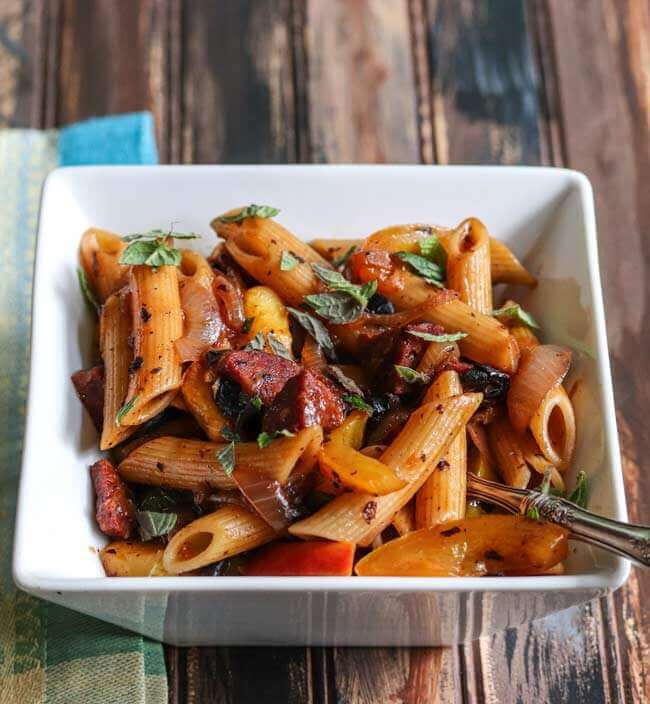 Since I last spoke to you I got a sinus infection and right as it ended my computer completely died and was sent away to the computer hospital. Where they gave me a new battery but it still seems to have problems. John has got some of them fixed but I feel like any day now they might pry my laptop out of hands again. I know, excuses, excuses, but I do have some reasons anyway (for my silence). For what it’s worth (probably not much).

I did at least warn Tuttle Publishing it might take me a while to get to Chris Urbano’s World of Filipino Cooking: Food and Fun in the Philippines. And much like Regional Indian Cooking it was worth the wait. For those unfamiliar with Filipino cooking, it is the very definition of melting pot. So much so, that when Urbano suggested chorizo as a substitute for the Filipino (and difficult to find for me) longganisa sausage I honestly figured either Mexican or Spanish sausage would work. Both culinary traditions have influenced Filipino cooking. (I went with Spanish since the dish in general had more of an Asian-European fusion feel and apparently the cured Spanish chorizo influenced the longganisa, but having said that the cooking instructions reminded me more of dealing with a fresh sausage such as Mexican chorizo.)

But I digress. The point being, this book takes that fusion feel and runs with it–in a delicious way. For example: Bulalo, or Hearty Bone Marrow Soup, which features sweet corn (in addition to Asian vegetables, fish sauce and potatoes). I rarely see sweet corn outside of American cookbooks–but I know from experience it is delicious with other flavors and this soup is at the top of my cold weather to make list. There are beef dishes, plenty of seafood, pork, noodles, salads and chicken dishes. The Filipino Style Chicken Curry, which demonstrates an Indian influence, is also marked to try because I know John will adore it. The Filipino Crispy Fried Chicken (Kaligayahaan Ng Manok) is an American-Filipino fusion dish–from the Philippines, not from the US. Now that I know we enjoyed this Filipino Black Bean and Sausage Pasta so much, I have Humba (Braised Pork with Black Beans and Pineapple) bookmarked to try. Basically, if you are interested in any kind of international cooking, I recommend The World of Filipino Cooking, 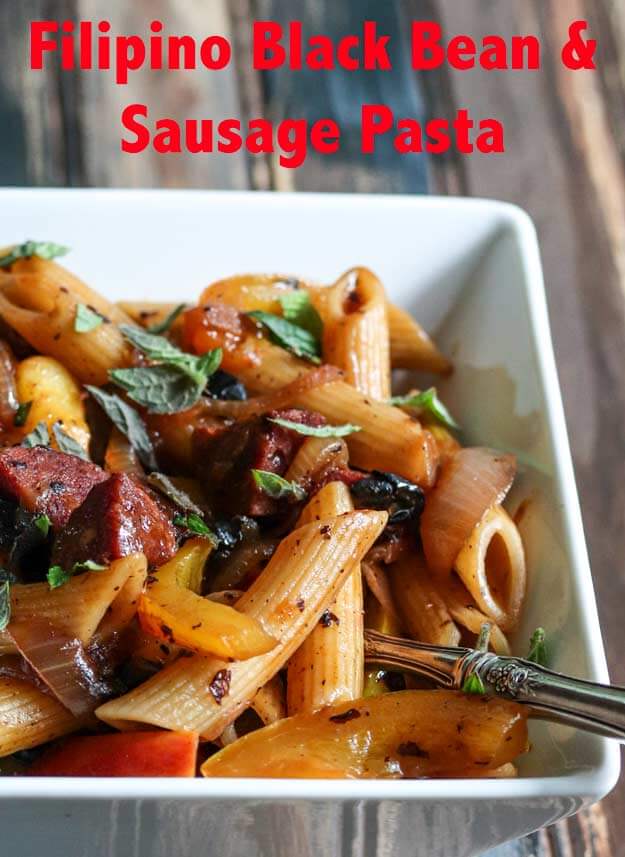 So about those black beans. Fermented black soybeans were new to us, although, me being me, I had had them in my pantry not knowing what to do with them. I forget when and why I bought them, but they did not get used and after that I had no idea what to do with them. So it was pretty exciting this Filipino Black Bean and Sausage Pasta called for them. Mine came in a vacuum-packed bag; like most fermented Asian ingredients they have a strong scent that I recommend ignoring. They are a flavoring agent, the effect of which gets muted by other ingredients. If yours are older, like mine were, I would soak them longer, until they are soft. I assumed mine were and they were a bit tough.

This Filipino Black Bean and Sausage Pasta requires an open mind. If you like sausage and tomato based pasta you will like it, but only as long as you have accepted it will not taste like a European pasta (which is what your eyes want you to expect). Much like the Indian Pasta with Spice-Infused Ground Lamb and Peas, if you take it on its own merits and not what your eyes expect, you will love it. Truthfully that rule applies to all fusion food.

Amusing side story: this dish, in the book, is Black Bean and Longganisa Sausage Rigatoni. I added Filipino for obvious reasons and removed the Longganisa because I was unable to use it. But I kept the rigatoni, did all of my pictures (including the captions and the collage below) and then realized I had used penna pasta. I just knew the Italian food purists would come out of the woodwork and roast me alive. So I quickly fixed the pictures and changed it to pasta, but any shorter tubular pasta will work just fine. 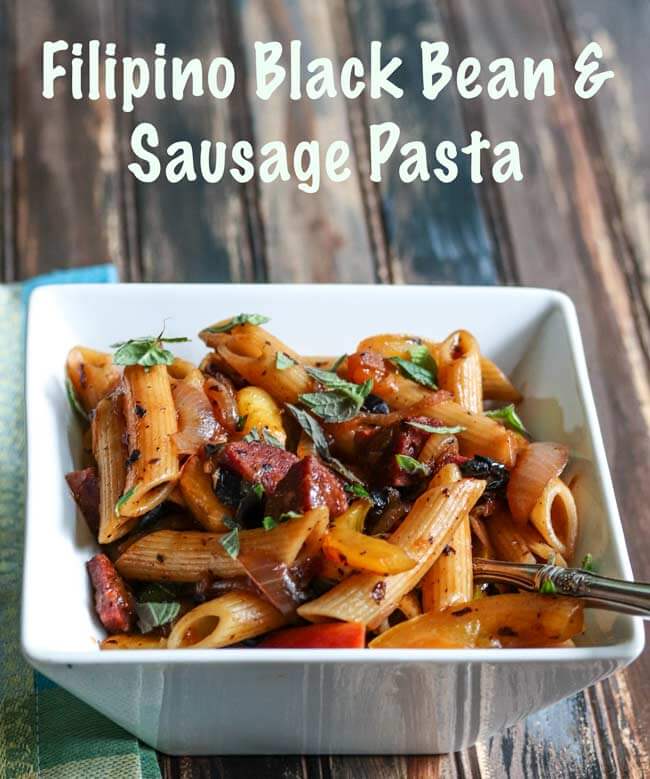 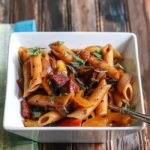 Closely adapted from Chris Urbano. Be sure to read the notes because both longganisa and Cuban oregano are hard to find and the substitutes require some changes in the cooking instructions.

*If you use longganisa, Urbano calls for boiling the sausage in its casing until dark brown. Then he calls for removing the casing and cutting it into little chunks. Because I was using Spanish chorizo I skipped this and just browned the chunks of sausage in the cooking pan first. Most Mexican chorizo where I am is meant to be removed from the casing and then cooked, so I would proceed similarly with Mexican chorizo and just brown it in the pan.

Another note on longganisa--it is apparently quite garlicky. So if you have to use chorizo, do add some garlic to the dish.

Cuban oregano, also called Mexican mint, is in the mint family; I could not find any and have never eaten it, but online I found that it was much stronger than Mediterranean or Mexican oregano and I also found reference to it having anise notes. I decided to use dried Mexican oregano, 1 teaspoon, which I crumbled into the cooking with the onions. I also garnished with just a tiny bit of mint for freshness and green. Urbano does not call for any particular herb to garnish the cooked dish but his picture does show something that could be mint or Cuban oregano.

Looking for a Filipino Black Bean and Sausage Pasta collage to pin? 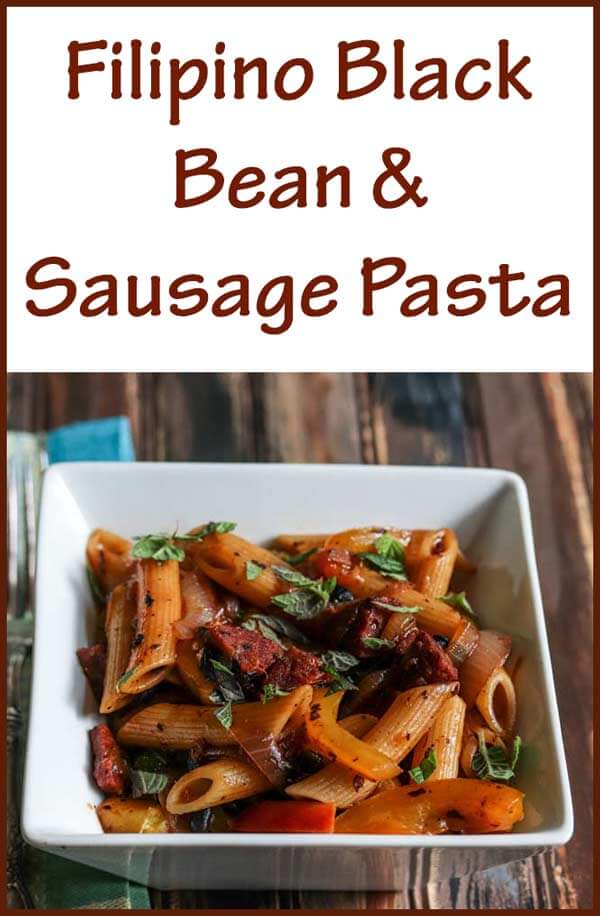