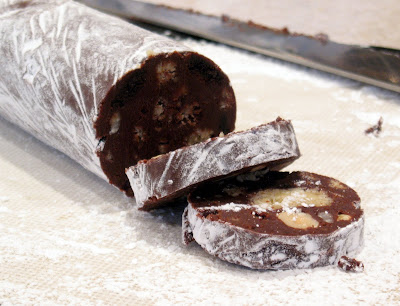 Chocolate Salami. Say it with me, Chocolate. Salami. If your mouth is not watering you either really hate chocolate or you don’t like salami.

At first I thought “Wow! Chocolate and salami! Well, if they can do bacon and chocolate, why not salami? What? It is a rolled chocolate log full of going stale bits of sweet yumminess put together to look like salami?!? Even better! Point me the way!!!”

Such was my internal dialogue when I found this Chocolate Salami over at Wild Yeast. Well that and Eureka! Something to do with leftover Christmas cookies! 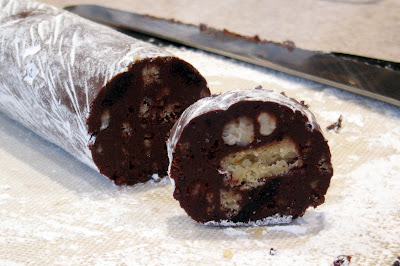 Other than being patient while the chocolate cooled down and firmed up enough to roll (which Sandra, of Le Petrin, seemed to think it would cool too fast which was very much not my experience–not sure if I did something wrong or maybe, as Susan at Wild Yeast noticed, the Google translator was having a rough day), this was SO EASY. And the final result is SO IMPRESSIVE. Is my enthusiasm for this treat coming through yet? 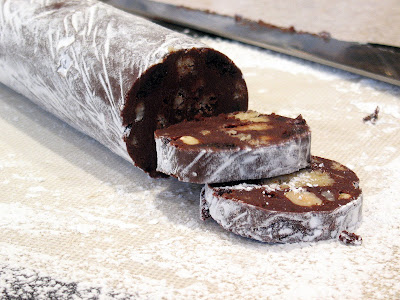 Place the butter and chocolate in a large microwave safe bowl. Microwave in 30 second increments at 50% powder until you can stir the mixture smooth. Be careful not to incorporate any air. Whisk together (gently) the egg yolks, chile pepper and liquor. When the chocolate is melted and smooth, whisk in the egg yolk mixture. Then whisk in the cocoa powder and sugar. Stir in the cookies and nuts. When the mixture is cooled but still mixable, stir in the salt (so as to prevent the salt from dissolving much).

I highly encourage you to head over to Le Petrin to watch her video of how the roll is put together. What I did was to wait (what felt like quite a while) for the chocolate mixture to firm up enough to hold some shape. Then I made a vertical slit in a paper towel ring (the cardboard that hold the towels on and is left when the towels are gone–I save them for just this reason). Place plastic wrap on a clean workspace. Working quickly, scrape the chocolate mixture into a log-shaped roll on the wrap, quickly shaping with your hands to be more log-like. Don’t be too fussy Then wrap it with plastic wrap so that is forms a bulky roll–place that roll inside of the paper towel ring, forcing the roll to become perfectly (or nearly so) circular. This last step will be easier with a second person helping–my husband held the paper towel ring open while I placed the chocolate roll inside it. Wrap this in foil and place in the fridge to chill until hard enough to slice.

When it is firm enough, first un-roll it and roll the whole thing in confectioner’s sugar. This keeps it from becoming sticky and beautifully mimics Old World salami. Thinly slice to serve. 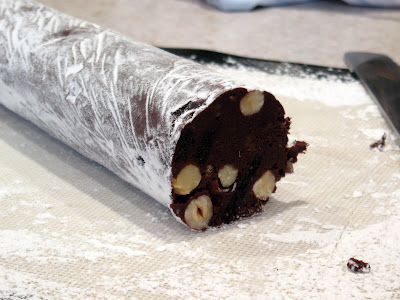