You are here: Home / chickpeas / Chickpeas Stewed With Chorizo 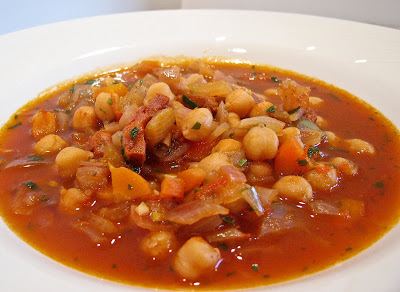 I am staring at one of the photos of this stew as I type, trying to decide between posting a correctly cropped photo and a more nicely edited photo. You see, I have finally updated my photo “developing” software, and right now I am teaching myself Light Room. It is eons more sophisticated–and complicated!–than what I was previously using, and I have not yet learned to crop images (or to do advanced editing for that matter). But already the images are cleaner and are also being uploaded with the correct amount of sharpness/clarity/something (haha, pardon my technical speak, apparently you need to save photos correctly for viewing on the internet, something I had never done before, and I am still not totally clear on the science behind it but now I am doing it at least). Literally, as I was typing this out, I realized I could crop them in my old software. So you have all been spared the really unbalanced yet sharper photos of my stew. Aren’t you relieved? 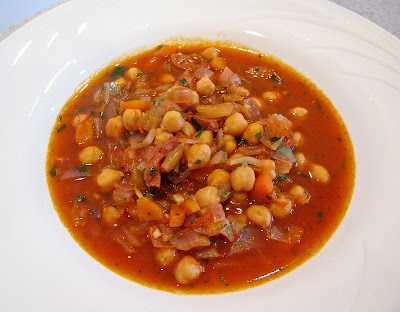 So anyway the stew. I made this while sick (yep still sick–turns out it turned into a sinus infection, so I am on anitbiotics now and anticipating finally feeling better soon), so you know it was easy. And as I have mentioned before, I took the time to write this post while sick, so you know it was tasty. Sammy and I would have preferred it with white beans–being 3, she ate all the sausage and and broth and ignored the chickpeas. I certainly would not go that far, since I like chickpeas just fine, but I would like the white bean texture more here, and the thickness it brings to stews as they fall apart. However, chickpeas are more traditional and John strongly preferred the chickpeas. I got the impression Alex would have been happy either way. So make it with whichever, but be sure to use a good smoked paprika and a good Spanish chorizo. 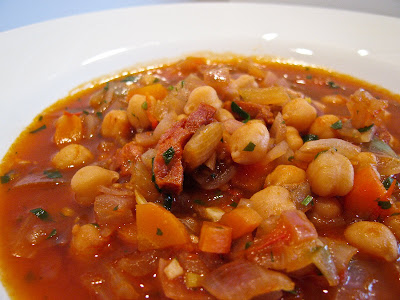 Begin by preparing the chickpeas. Place them in a large heavy pot and cover them with water by about 2 inches. Bring them to a boil with the bay leaf, 2 teaspoons of extra virgin olive oil, and the 3 smashed garlic cloves. After they have boiled for about 5 minutes, cover the pot and reduce the heat to low to simmer.

After 1 hour, heat a large, preferably nonstick, skillet over medium heat with the 1-2 tablespoons of extra virgin olive oil. Add the sliced chorizo and saute, rendering its fat and browning the sausage. After 5-10 minutes, use a slotted spoon to add the chorizo to the chickpeas. Turn the heat off of the skillet, but leave 2 tablespoons of fat in the pan. Cover with foil if your kitchen has much dust floating around.

When the chickpeas are tender but not super soft, and when you are about 30 minutes away from serving dinner, re-heat the skillet with the chorizo flavored fat in it. When the fat is hot, add the onions, carrots and half of the minced garlic. Fry, stirring, until the onions are beginning to brown, 5-10 minutes. Add the tomatoes and smoked paprika, bring to a brisk simmer, and cover the skillet (I used foil because I had no lid and this was adequate). Cook for 5 more minutes. Then add the tomato onion mixture to the chickpeas, and if the chickpeas were resting (my chickpeas cooked quickly, so I just left them on the stove without heat for an hour or so), bring them back to a simmer. If you want your stew to be less brothy, leave the lid off; if you like the brothiness, place the lid back on. Either way, cook the chickpeas for another 20 minutes, until the chickpeas are very tender.

In the meantime, using a mortar and pestle (or a spoon and a bowl–I cannot find my small mortar and pestle and my large one reeks of Thai flavors) smash the remaining minced garlic, chopped parsley and several pinches of coarse salt into a paste. 5 minutes before serving the stew, stir this mixture into it. Taste the stew for additional salt. Serve with a salad and bread–I forgot to make bread the first day (remember I am sick), but the second day, when we had bread, it tremendously improved the overall experience of this stew so I highly recommend it. Crusty bread would be better, but I made a low effort sandwich bread and it was still fantastic. 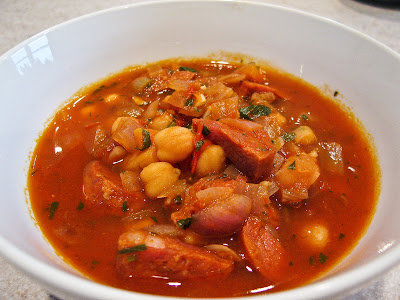